Why Planes Don’t Fly Over Himalayas – Wouldn’t it be amazing to see the tallest mountain on the planet from an airplane window? Just imagine yourself nestled in your seat, sipping on a coffee and admiring that snow covered mountain peak! The only problem is that planes don’t fly over Mount Everest, or the Himalayan range,for that matter. But why?

To answer this troubling question, let’s imagine a scheduled commercial flight which, out of the blue, decides to fly over the Himalayas. At first, the flight is going smoothly: the plane reaches its usual cruising altitude of 35,000 feet and is traveling at a speed of about 550 miles per hour. Soon, the pilots see a range of tall mountains straight ahead, with one peak standing out among the rest.

It’s the world-famous Everest – the highest mountain above sea level on the whole planet! Its height is a monstrous 29,000 feet, and it keeps growing by one-tenth of an inch every year! See ,there it goes! Anyway, the pilots aren’t even a bit concerned about having to fly over the peak: after all,the plane has more than 6,000 feet to spare. 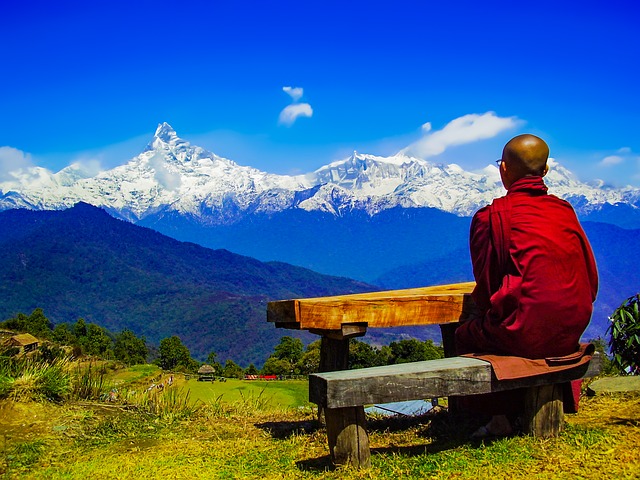 But once the aircraft has reached Everest and is moving over it, the pilots realize they shouldn’t have been so careless! Because that’s when everything goes awry! Suddenly, everybody on board hears a loud bang, and the terrified cockpit crew immediately recognizes the signs of sudden decompression!

There might have been a problem with the pressurization system; one of the doors could have been sealed in correctly; or there could have been a crack in a window or the fuselage. Whatever the reason for the emergency, the crew has to react immediately! Passengers on this plane were paying attention to the pre-flight safety demonstration before the plane took off.

That’s why they immediately put oxygen masks over their mouths and noses and try to keep calm. The cockpit crew, on the other hand, is close to panic. The problem is that there isn’t as much oxygen in your mask as you might think. It usually lasts for no more than 15 to 20 minutes. And you can probably imagine the consequences of running out of oxygen at an altitude of 35,000 feet.

Related :  A Potentially Habitable Super Earth Has Been Discovered

That’s why the pilots must make the plane drop down to 10,000 feet, where the passengers will be able to breathe without using oxygen masks. But..  the plane is still flying over the Himalayas, and there’s no way it could drop so low! I’d better just end the story right now, before something terrible happens to our passenger jet and all the travelers inside.

I think you’ve got the idea. But you should know that the inability to lower the plane in the case of rapid decompression isn’t the only thing preventing aircraft from flying over Everest. One of the reasons planes have such an impressive cruising altitude is that it lets pilots have some “room for error”. It means that if something goes wrong, the captain can glide the aircraft while tryingto fix the problem.

But you can’t do much if you have a mere 6,000 feet to spare, right? On top of that, if an emergency landing is unavoidable, pilots simply won’t be able to find an easily accessible airport nearby! Admittedly, Kathmandu can deal with a jet, but this airport has only one runway and doesn’t have an instrumental landing system.

And finally, if you’ve ever flown over the mountains, you probably know that turbulence above them is nothing but nasty. Winds moving over mountain ranges at high speeds create so-called “mountain waves” which can turn any ride into a rough one. And while turbulence isn’t dangerous per se, airlines still try to plan their routes around mountainous areas if possible.

And speaking of the Himalayas, the turbulence there is so bad that it’s almost impossible for commercial airplanes to fly over that region. Have you ever experienced severe turbulence while flying over the mountains? Share your stories in the comment section below! Anyway, if you take into consideration all these factors, it becomes crystal clear why it’s both safer and easier for airplanes to avoid the Himalayas altogether.

Related :  What It Is Really Like Living In North Korea?

But this mountainous region isn’t the only place pilots dislike. How about I tell you about some of the most dangerous airports in the world? – Those who decide to visit Mount Everest usually arrive at the Lukla Airport in Nepal. But not all the visitors know that this airport is one of the world’s trickiest. Pilots find it extremely difficult to land there because the airport is nestled between high mountains.

On top of that, it has a terrifyingly short runway. And since the terminal building itself has no lights or electric power, it’s impossible to land there if the conditions aren’t perfect. – Another airport that will chill your blood is also situated in the mountains. It’s Toncontin Airport in Tegucigalpa, Honduras.

Due to a short approach and difficult terrain, planes must make a lightning-fast 45-degree bank turn during the descent. After this, aircraft must drop in altitude immediately; otherwise, they might scrape the hills right underneath. – There are only 8 pilots in the world who are qualified to land at Paro Airport in Bhutan,Himalayan Mountains.

The runway of the airport is a mere 6,500 ft long and is surrounded by 18,000 ft-tall peaks. Planes have to make an extremely quick descent to approach the airstrip safely, hence the airport’s high ranking among the most dangerous airports of the world. – Landing at the airport on the Portuguese island, Madeira, remains one of the most treacherous feats in aviation, even after its runway was renovated.

The thing is that the landing strip of this airport is located right on the shore of the ocean, between steep cliffs. Originally, the runway was only 5,250 ft. After being extended several times, the airstrip of Madeira Airport is now 9,124 ft, but it’snot your usual runway. Because of the lack of space, engineers suggested building a series of runway platforms on an artificial island.

It was constructed right in the ocean, with 180 columns holding it up. – The runway of Narsarsuaq Airport, in Greenland, is constantly covered with ice. On top of that, the airstrip itself is only about 6,000 ft long. But that’s not all! The weather in that region is always stormy, which creates severe turbulence and adds to low visibility.

Related :  17 Crazy Things That Are Only Possible In Japan

Violent winds hit the plane, and this, along with the icy airstrip, can easily direct the aircraft off course. What’s more, there’s an active volcano nearby. It often erupts, sending clouds of perilous ash in the air. If it gets inside the engines, it can destroy them, which could lead to a crash. No wonder both airplane crews and passengers dread landing at this airport.

Whew, sounds like fun, huh? – There are no mountains around Gibraltar International Airport; the runway isn’t that short; and, in general, it’s not particularly hard for a plane to land there. But there is one feature which sets this airport apart and makes it totally unique: the main street of that area, Winston Churchill Avenue, intersects the runway!That’s why the road must be closed every time a plane is going to land or take off.

Of course, there’s a stoplight on the road that informs cars when it’s time to stop,but still, there’ve been several close calls during the airport’s history. I wonder if there’s a stoplight for the planes too?- If you ever go to St. Maarten Island in the Caribbean, you’re likely to be completely smitten with its Princess Juliana Airport.

It’s one of the most famous airports in the world, thanks to a public beach located right before the runway! However, landing aircraft create deafening noise and powerful gusts of wind which blows and toward beach goers. But that’s not what pilots have to worry about. Cockpit crews have another problem on their hands: being just 7,150 ft long, the airstrip is too short for large aircraft to feel comfortable while landing. Normally, they require at least 8,200 ft.

So they just, what, throw out an anchor to stop? I’d pay to see that