Why Toilet Paper Is Only White – Let’s consider bathroom tissue, if you will. C’mon it’ll be fun. Ther’s all kinds: embossed, three-ply, six-ply, scented — you name it. But whatever it is to the touch or sniff, it’s looks the same to the eye: white. So how come toilet paper has lost its color so dramatically? Has it gone pale due to the disturbing things it has silently witnessed over the years?

Well, let me “roll out” some explanation. The first colored TP appeared in the 1950s, when decorating your bathroom in a single style was a thing. If you imagine a pastel blue toilet, sink, and bathtub, you’re guessing right, only there were innumerable other options, from pink to yellow and even black.

Black? Floor tiles and walls were, of course, to match, and so were the typical bathroom utensils. And having a white toilet paper roll hanging there was a real monstrosity. So toilet paper producers got the idea and caught up, dyeing their products in all possible colors so that people could complete the image of their bathrooms.

It was a real explosion of colorful TP ideas, and it didn’t stop at simply painting it this way or that. By the end of the decade, manufacturers invented see-through packages, which wasn’t a bad idea — you know how what you see in the ad or on the package often is very different from the actual contents, right? 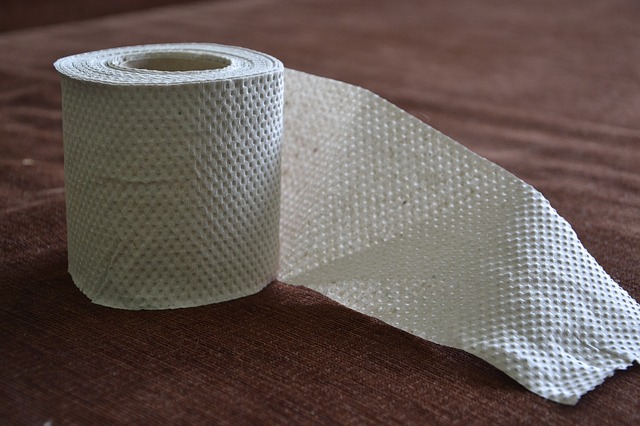 The colors were also added in different ways: they could be solid or come in various patterns to fit even the savviest customers’ tastes. The popularity of colored toilet paper reached its peak by 1970s, but sometime around the 1980s, personal hygiene shelves became gradually whiter, and by 2004 all color disappeared completely. And there were several reasons for that.

Firstly, several studies showed that the dye used in colored TP can be potentially dangerous,and here’s the rub. Dyes weren’t as strictly regulated 50-70 years ago, so manufacturers could basically add whatever coloring they wanted. Also, no medical implications were thought of at the time, and dyeing was considered safe by default.

But, as time went, more and more evidence of different threats to public health appeared,and toilet paper producers decided that it was better to be safe than sorry and flushed the colors. Second reason for the total whitewashing was that demand was failing, while the costs of production remained the same.

People stopped going crazy about pink and violet bathrooms, opting for more practical and “clean” white look. So naturally, there was no more need to buy colorful toilet paper either. For manufacturers, on the other hand, it meant they could cut costs because bleaching thepaper is easier and cheaper than buying dyes and adding them to the product.

And thirdly, environmental research also showed that dyed toilet paper isn’t a good thing. Initially, paper was made from whole wood pulp, but if you imagine the scale at which it is produced, you won’t be surprised that conservationists protested this practice.

Soon, manufacturers switched to making TP from recycled paper: it is pressed into a pulp and then undergoes some processes to end up in your bathroom. Just hanging there. Waiting for an opportunity to be of service. Although it’s better for the environment, the problem with this recyclable method is that the resulting product receives this unpleasant grey or brownish tint.

When manufacturers tried to give it to customers without any color adjustments, their sales plopped — no one wanted to buy toilet paper that looked as if it had been used before . So the choice was to either bleach it like there’s no tomorrow or dye it in a different hue.

Again, bleaching was cheaper, but the colored bathroom craze had yet to subside, so manufacturers did both. In the end, though, it turned out that dyed paper is slower to decompose in nature and is more difficult to dissolve in water. Basically, every time you flush down some amount of dyed TP, you face the risk of clogging the plumbing and… all that follows.

You can now find colored or patterned toilet paper only in limited editions. But if you’re not in the US, you’re now probably thinking I’m talking nonsense. For example, if you come to France, you’ll see the personal hygiene shelves stacked mostly with pink toilet paper, not white, for your delicate derriere.

You can find an occasional white pack, of course, but it looks like it’s lost, all alone in the pink ocean. If you’re waiting for an explanation, I’m sorry — I don’t have one. It seems to be some sort of a traditional thing, though why a country would choose its national toilet paper color is beyond me.

Perhaps it’s all for posterior, I mean posterity. Do you have any idea? Don’t be shy and share in the comments! Other countries have also not wiped out colored TP altogether. In Germany, you would find different patterns, and many Eastern European nations also experiment with colors.

There’s a simple reason behind that: dyes have become much safer for both public health and the environment. You know those E-things they add to food to make it tastier or conserve longer? Well, food colorants are also there, and they’re considered safe for your health.

Paper dye manufacturers took the idea from there and produced brand new types of dyes that both nicely dissolve in water and won’t even produce much skin irritation, or any harm if eaten. Oh golly, coming soon to social media: the toilet paper eating challenge!

Turning the other cheek now, there are countries and traditions, though, that don’t want to have anything with toilet paper at all, considering it dirty. With apologies to Steven Covey, let’s “Begin with the End in Mind”, shall we? In India, for example, you probably won’t find TP in any stores because it’s not in their tradition.

Instead of wiping yourself, you’re expected to use a bucket and a mug that are put there inside the bathroom for your comfort. Warning: this is not a coffee mug. In better hotels and restaurants, as well as some homes, you’ll find a hose for washing up or a tap-controlled spray that ejects water under pressure right into the heart of your bottom.

It’s best practice to always check the amount of pressure first, or you could be the next jet pack guy. It’s for that same reason you shouldn’t ever use your left hand for any personal interaction while in India. Remember the bucket and the mug? Well, with your right hand you hold the mug with water, while your left hand does the deed of tidying up your tuchus.

Naturally, it is considered unclean after that, so don’t ever shake hands or pass the salt to anyone with your left. Right? By the way, you ever wondered what people did to clean themselves when toilet paper wasn’t invented yet? Well, water is the first thing that comes to mind, of course, but that wasn’t it.

All kinds of things went in use, but the most interesting  were the Ancient Greeks who used clay and stones for hygienic purposes. So now you know where the term “roughing it” originally came from. Ancient Romans went a bit further: they invented communal bathrooms with long marble benches that had holes in them, and beside those benches were sticks with sponges attached to them, sitting in a bucket.

When Romans finished their business, they took the stick and washed themselves… returning it to the water bucket afterwards. And yes, the sponges were reusable. If you’re wondering, the Latin word for share is, share. Colonial Americans also had rather resourceful ways when it came to personal hygiene.

Corn was everywhere at the time, so they figured they could put it to good use once the edible part was gone. But if you think it was those big leaves they used to wipe themselves, well, they had another idea altogether. Farmers took corn cobs into the bathroom with them. I guess they felt those things were better suited for the business.