10 Places on Earth Where Gravity Is Zero – Gravity, you heartless so and so…, well, that’s what I think when I trip over a stone and fall face down. Of course I’m not clumsy, you know. Anyway, gravity is a constant, right?, something entirely unshakeable that we can always rely on in this ever-changing world…unlike, you know, love. Feeling romantic, sorry. But what if I told you that it’s not as honest and clear as you think?, there are places on our planet where gravity behaves like it’s gone crazy. And that’s why you clicked here. So Let’s take a look. 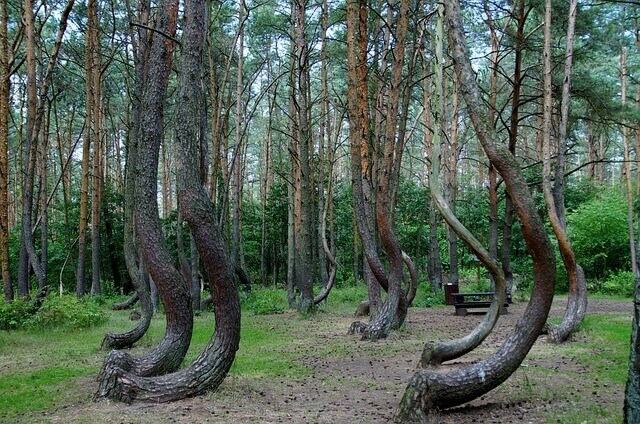 1. Magnetic Hill in Leh, India
There’s a stretch of road in India that’s been attracting tourists from all over the world. It’s no different looking from the surrounding landscape, and you could easily pass it by without noticing, if not for one very unusual and a bit creepy thing: if you stop your caron the Magnetic Hill going up the slope and put it on neutral, it’ll start crawling upwards, eventually reaching the speed of up to 12 mph.

They say there’s some sort of a magnetic force at work here that tugs cars up the hill,hence the name. On top of that, even airplanes are said to gain altitude above this place. Skeptics offer another explanation, though: it’s just the lay of the land that creates an illusion of going upwards, while in fact you’re moving down the hill, and vice versa. Whatever the truth, I’d like to see it for myself. Would you?, tell me down in the comments.

2. The Crooked Forest, Poland
Near the village of Nowe Czarnowo, there’sa forest, in the depth of which you can find a strangely looking pine grove. Planted in 1930s, there are 400 trees that sharply twist to the north almost at the roots and then grow upwards in a semicircle. Although scientists offer different theories about the trees’ weird growth, nobody can say for sure what made them look like that.

Some say it’s people who did it, while others believe it’s a gravitational anomaly that somehow pushed the trees down. The trouble with this version, though, is that it would’ve had to stay there for years,and that it only affected the trees. Still, no certain explanation exists anyway, so who knows?

3. A waterfall, Faroe Islands
Ever seen an upward moving waterfall?, you can have a look at one on the Faroe Islands halfway from Iceland to Scotland. But if you were expecting me to tell you an unbelievable story about a mysterious force pushing the water up the rock, then sorry: no such thing here. The truth, however, is quite jaw-dropping anyway: the winds in this place are so powerful that they lift the water and throw it back up.

I guess it was this kind of wind that allowed Mary Poppins to travel on her umbrella. Sounds good. In fact, this waterfall is not unique: there are several more places on Earth where winds create an illusion of defied gravity. For example, there’s the Kinder River in England that has a waterfall constantly struggling with the wind. It’s so strong that half of the cascade’s water seems to just fly up without ever touching the bottom of the drop.

4. Hoover Dam in Nevada, USA
If you ever get up to the top of the dam,which is about 726 ft high, you can try a little trick: take a bottle of water and pour it over the edge. You’ll see the water flow up instead of spilling down. Once again, this isn’t really any magic or unnatural phenomenon: the wind up there is simply too strong for the water to fall, just like with the waterfall on the Faroe Islands. Here, though, it looks even more impressive since you can do it yourself.

5. Dokkaebi Road, South Korea
Another gravitational anomaly located on aroad. Locals once found out that, if you put an empty can or a bottle on the ground, it will immediately start rolling uphill. Unlike other such places in the world, though, Dokkaebi Road doesn’t just create an illusion. When you walk down the slope, you don’t feel as if you’re going up — everything’s pretty normal. But once you put down an object that can roll, it will do that in the opposite direction than it should. Local authorities were quick to get the idea and put a signpost directing curious tourists to the mysterious road.

6. Golden Rock, Burma
If you happen to be in Burma  ,, make sure to visit this well-known site. A gold-leaf covered boulder sits upon the edge of a cliff, and a small pagoda is built on top of it. The impressive thing about the rock is that it only lightly touches the cliff for support. In fact, it looks like the boulder will fall any minute now, but it has been standing like that for centuries. On top of that, the pagoda built upon it is also not really a recent addition, so it’s quite an unusual sight to see.

Related :  29 Things That Exist Only in Japan

The rock seems to be saying, “Gravity?, I don’t care about that stuff, ”The legend has it that what keeps the boulder in place is a single strand of Buddha’s hair. I don’t know about that, but you can check out the rock for yourself and see that it’snot attached to the cliff by anything. And yet it’s not budged for 2,500 years. Something must be at work here, huh?

7. Stone of Davasco, Argentina
If there ever was a thing that said “I defy gravity” out loud, it’s the Stone of Davasco. The huge 300-ton boulder stands precariously on the edge of a cliff and rocks a little bit from side to side in the wind. People even checked it by putting glass bottles under one of its edges — they exploded with another movement of the rock.

Unfortunately, today you can’t see this wonder of nature as it was a century ago:in 1912, the boulder suddenly dropped from its perch, which it had occupied for literally hundreds of years. The people of the nearby town of Tandil were so sad about this event that 95 years later,in 2007, they decided to restore the stone!Well, not exactly put it back together chip by chip: they made a plastic replica of the rock and put it on the same spot and even in the same position. So even today, coming by Tandil, you can see its famous balancing boulder — more of a symbol now, of course, because it’s no longer rocking and only weighs 9 tons, but instantly recognizable nonetheless.

8. Devils Tower in Wyoming, USA
Remember this place from the movie “Close Encounters of the Third kind”?, if not, you should go watch it. But not right now. This place doesn’t make you feel like you’re witnessing some magic, and doesn’t really trick gravity right before your eyes. Sounds almost boring compared to the rest of the sites on my list, right?. but the true mind-blowing feature of Devils Tower is that scientists can’t explain how it came to existence in the first place.

Related :  18 Unique Courses You Can Actually Study in the US

You see, it’s an 867-foot rock formation with walls so steep they’re basically vertical. But that isn’t even the main thing. This piece of stone just rose amid rolling plains of Wyoming with nothing like it formiles and miles around. So how is it that such a flat landscape could’ve suddenly given birth to something so tall?, theories abound, but nobody has the answer yet. My theory?, perhaps here is where the Earth has a giant “outie” belly button…

9. Oregon Vortex, USA
The House of Mystery in Gold Hill, Oregon,amazes its visitors with gravity-defying effects: you can’t stand straight there, always leaning to the side and having to hold on to something for balance; balls roll upwards; and there’s also a broom that stands perfectly still wherever you put it — unlike virtually everything else in the shack. The local Native American tribes called this place the “forbidden ground” even beforethe house was built there, and they avoided approaching it.

The owners of the shack, though, decided to turn it into an attraction, and they succeeded!They created an atmosphere of mystery around the place, and spread the news about it in newspapers and later on the Internet, and voila — a perfect anomaly is made. In fact, it’s no more than a curiosity — a human-made optical illusion that tricks your eyes and other senses. Ah well, whatever.

10. Hudson Bay, Canada
Okay, we’ve talked about some pretty ambiguous stuff, but now it’s time for the real deal: the Hudson Bay anomaly. This is probably the only place in the world where gravity is indeed lower than anywhere else on the planet. Even skeptics can’t smirk at it because the difference has been measured with precision equipment.

So, does it mean that the gravity here is as low as, say, on the Moon, then?, unfortunately, the difference is minuscule. The exact value is 0. 005%, or 1/200th of a percent. You won’t be able to feel it even if you try your hardest, but it’s still there!Scientists say this anomaly exists because of the ice sheet that covered the area about 10,000 years ago. It compressed the rocks so much that they still can’t fully recover, shifting the gravitational field in Hudson Bay. Sometime in the future, though, the gravity will return to normal in this area as well.