15 Things the Queen Has Never Done in Her Life – Although modern royal families are way more down-to-earth than their predecessors, there are still a lot of everyday things they never do. Queen Elizabeth II was brought up in a pretty strict environment. As a result, she’s never done a lot of the things you do every day without giving it a second thought!

1. She never went to school.
But despite this, Queen Elizabeth II is a very educated person. She was tutored privately, along with her sister Princess Margaret. And there’s no doubt that their teachers were the best the country could provide. On top of that, the future queen studied not only general subjects, but also constitutional law and history. It was necessary to prepare her for her future role.

2. The Queen has never taken a selfie.
Yep, unfortunately, royal protocols don’t approve of this innocent hobby. And even though some people have probably taken selfies with members of the royal family in the background, Queen Elizabeth herself has never been in a selfie willingly.

3. The Queen has never broken in her new shoes.
Yep, even though she’s been ordering the same style of shoes from the same company for years,the queen still needs someone to make them comfortable first. And it makes sense once you find out that she prefers patent leather, which can be particularly tough when your shoes are new. That’s why a special “shoe breaker” puts on cotton ankle socks and a new pair of shoes and keeps walking until the leather becomes soft. The main rule this person has to obey is to walk on carpets so the soles can stay pristine. 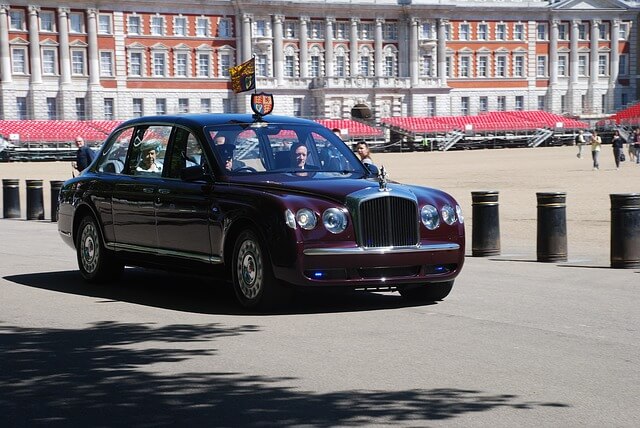 4. Her Majesty has never gone grocery shopping.
Grocery stores are seen as something un-royal; that’s why members of the royal family aren’t supposed to buy food on their own. Come to think of it, it makes perfect sense: all of the Queen’s drinks and dishes are prepared by skilled chefs. So she doesn’t have any need to frequent her local Seven-Eleven. However, once, The Queen did visit a grocery store. But she was fulfilling her royal duty at that time, not shopping. And the witnesses said that she looked a tiny bit out of her element, strolling down the aisles with food.

5. She’s never taken a driving test.
But that doesn’t mean that the Queen can’t drive – oh, she CAN and DOES!In fact, she loves driving very much and is often seen behind the wheel of her favorite Range Rover. As for a driving license, Her Majesty is the only person in the UK who doesn’t need to have any documents to drive a car. What’s more, she doesn’t even need a license plate! It’s a part of her royal privileges.

6. Queen Elizabeth has never had a 9 to 5 job.
And no-one will argue with the fact that being the queen of the UK 24/7 is already a huge responsibility. On the other hand, in her youth, during tough times, the future queen worked as a military truck driver and mechanic. But the Queen has hobbies that help her to relax, for example, spending time with her dogs or horseback riding.

7. She’s never had a social media account.
And no wonder: members of the royal family or those married into the family seldom do. For example, after marrying Prince Harry, Meghan Markel deleted her personal Facebook,Instagram, and Twitter accounts. Anyway, if you want to be aware of the main events happening in the royal family, you can follow the official Kensington Palace Twitter and Instagram accounts. But try as you might, you won’t find the Queen on TikTok or Snapchat.

8. The Queen has never dated.
Yep, Her Majesty was lucky enough to find her Prince Charming on her first try! She met Prince Philip when they were still children. But Princess Elizabeth fell in love with her future husband only sometime later, when she was 13 years old, after meeting him on a tennis court. After that, they began writing letters to each other. And in 1947, when Princess Elizabeth was 21, the happy couple finally got engaged. Five months later, they got married at Westminster Abbey, with 2,000 guests attending the ceremony.

9. Although the Queen is famous for her love of her pet corgis and dorgis, she’s never filled their bowls with food.
But the pooches don’t seem to mind: there’s an in-house chef whose task is to make gourmet meals for the royal dogs. Their delicacies are always freshly-prepared, and a special footman delivers the food everyday. By the way, Queen Elizabeth got the first corgi of her own, called Susan, when she was 18. Since then, she’s had more than 30, many of which were Susan’s descendants. Regrettably, her final corgi passed away in 2018, and since then, Her Majesty hasn’t had any full-bred corgis. But she still has two dorgis, Vulcan and Candy, which are a cross between a dachshund and a corgi.

10. She’s never voted.
But it’s not like she isn’t allowed to vote. Nope, legally, the Queen can vote at any elections or referendums. Her Majesty just chooses not to. The thing is that she has to “remain strictly neutral with respect to political matters”. And she’s been following the royal protocol on this matter so far. Interestingly, other members of the royal family tend to follow the Queen’s lead. They eagerly support charities and take part in philanthropic events, but prefer to stay neutral when it comes to politics and voting.

11. Queen Elizabeth has never had a passport, but she can freely travel overseas.
This paradox makes sense when you think about the fact that a British passport gets issued in the name of the Queen. That’s why the Queen herself doesn’t need one. So when the most well-traveled monarch in British history goes abroad, she just breezes through customs and passport control. She doesn’t need to prove her identity to immigration officials or show any travel documents. As for other members of the royal family, they do have passports and show them while traveling abroad.

12. The Queen has never opened her presents on Christmas Day.
Every year during the festive season, the royal family travels to the Queen’s Sandringham Estate in Norfolk to celebrate the holidays there. But Her Majesty and her relatives open their presents on Christmas Eve instead of Christmas day. Queen Elizabeth’s father, King George VI, was the one who started this tradition. Also, rumor has it that the family members like giving each other gag gifts. Well, it probably helps with the awkward problem of what to present to the longest-reigning monarch of Great Britain.

13. The Queen has never traveled without a pack of her own blood to the countries where it might not be that easy to access a reliable blood supply.
In fact, this is the habit of both Prince Philip and Prince Charles as well. This way, if there’s a medical emergency, the Queen, her consort, and the heir to the British throne will be able to have a blood transfusion. Besides, they’ll be sure that the blood is free from any infection.

14. She’s never celebrated her birthday only once a year.
The Queen’s real birthday is on April 21, but it’s officially celebrated on the second Saturday of June. The thing is that historically, monarchs who had birthdays in colder months tended to change the date of the official ceremony for a warmer season. And having a birthday celebration in June means that the weather is more likely to be favorable for a parade.

15. She’s never been to the gym, even during her youth.
But Her Majesty is in her 90s, how does she keep fit? The most likely reason is the Queen’s love for animals, which helps her remain active and energetic. She spends a lot of time taking care of her dogs and horses. Plus, she’s never been obsessed with food.

On top of that, people who know the Queen say that she’s very disciplined, and thanks to this character trait, she stays healthy and in good physical condition. And finally a bonus, The Queen has never been to my house. But the invitation is open for Your Majesty any time, and if you let me know in advance,I’ll have some good old BBQ ready for you and Philip — if he’s up for it.