17 Crazy Things That Are Only Possible In Japan – Are you thinking about visiting Japan? Is it on your bucket list? If no, then you should consider going there. You won’t believe what sort of things are waiting for you in the land of the rising sun. It’s like a whole other world full of unbelievable phenomena, and weird traditions. Intrigued? Here is a list of several fascinating stories shedding some light on the daily lives of ordinary Japanese people, that we’ve collected for you.

Pushing people in the subway. Did you ever wonder how many people could be placed in one metro wagon? It can be easily checked in Japan. Japanese subways have so many passengers during rush hours that there are special workers—Oshiya, who push people into trains. Their goal is to squeeze as many people as possible into a subway tram. They wear white gloves and push people into a train so that the doors can be shut. It sounds so surreal that has to be seen or felt to be believed. 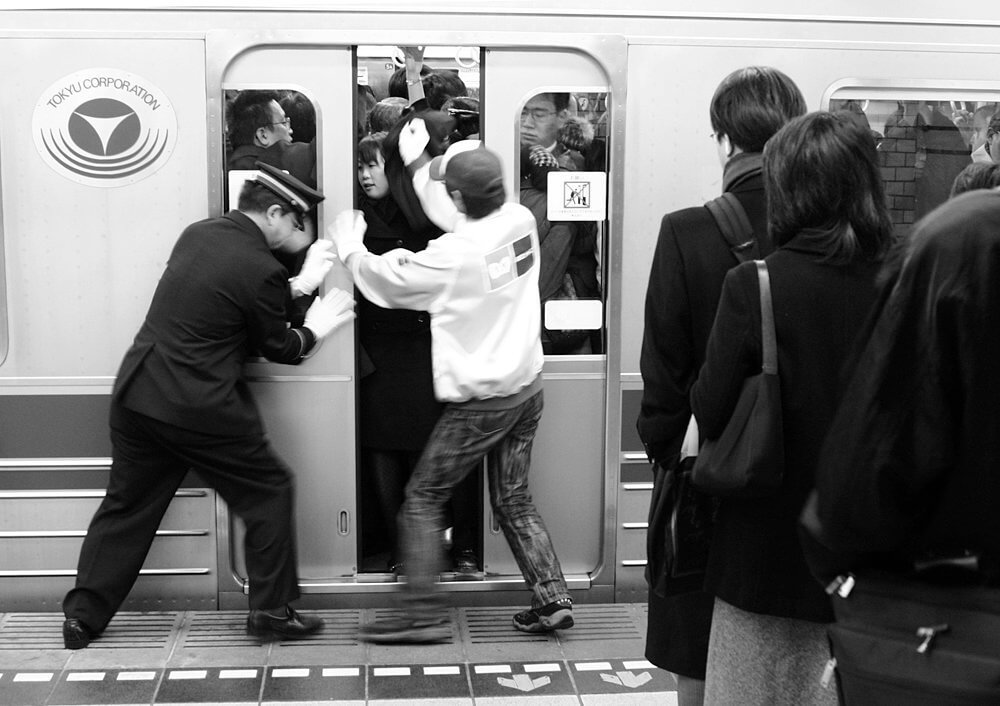 Twenty-four thousand dollars for a couple of melons. In Japan, melons cost as much as a new car. Unbelievable, huh? Yubari King melons are reported to be among the world’s ten most expensive foods. Even Japanese square watermelons are not as expensive as they are. At an auction in 2008, two melons were sold for $24,000. That’s more than $10,000 for one melon. Just let this fact sink in. The reason for such a high price is the rarity of the fruit. These melons are grown in small amounts on the island of Hokkaido, and their harvest is immediately bought up by dealers.

Kit Kats with the flavors of sake, wasabi, sweet potatoes, or chili pepper. The name of Kit Kat candies in Japanese sounds similar to Kitto Katsu, or you will surely win. That is why they are often given to students as a good-luck-gift before exams. Almost five million Kit Kat bars are eaten daily by the Japanese. As with many other foods, Japanese Kit Kats have the most fantastic flavors. From chili pepper and wasabi to green tea and pear. Overall, Nestle has created more than three hundred different taste varieties of these bars just for Japan. Can you guess the rest of the two hundred ninety-six Flavors?

Related :  Why Nobody Can Survive in the North Pole

A cafe that sells tenderness. Ah, how different this world would beif all of us got the needed amount of love. However, wait! You can easily get it in Japan. There is a special cafe that sells tenderness. For an extra charge men are allowed to lie with the waitresses, hug them, establish long line contact, or stroke their hair, but no further. In Japan, a large amount of attention is paid to the visual side of things. For example, cafes where waitresses are dressed as pretty house maids, are currently trendy.

The widest assortment of trains. Do you want to ride a cartoon train? That’s not a big deal, just visit Japan. The land of the rising sun has the widest assortment of trains. From vintage, double-decked, super fast ,trains with no engine driver, to trains resembling cartoon characters, such as Thomas the tank engine. Moreover, subway trains have special women only cars safe from men’s advances.

Vending machines that can sell anything. Wouldn’t it be nice if we could buy anything from vending machines? Again, that is possible in Japan. Vending machines are so popular in this country that you can buy the most unbelievable things from them. Like common onions, or a hand written love letter. We wonder if these machines can peel off onions as well.

A spa where you can splash in wine, sake or coffee. Do you remember fairy tales from your childhood where some king takes baths in hot milk to stay young? Now these tales are not surreal anymore, Japan has a special type of spa where you can soak in your favorite beverages. It is possible to splash around in coffee green tea, red wine and even sake. The most interesting thing here is that you can drink them on the spot.

Pet robots for children. Can’t you imagine your life without dogs? What if you lived in Japan, where getting a pet is a costly affair, equivalent to buying a new car. That is the reason why local children are increasingly offered toy robots imitating house pets. The dogs come with a variety of sensors, a camera and a microphone. The final Generation can even talk. They don’t require feeding, and they don’t even pee.

Sakura: beautifully edible. Have you ever wondered what sakura tastes like? If yes, then the easiest way to enjoy the taste of it is to try traditional Japanese sweets called wagashi. Japanese people love the cherry tree so much that not only do they easily look forward to its flowering season each spring, but also, they use the whole plant. They eat berries, blossoms and leaves. Dishes featuring cherry petals are particularly popular in spring, when the entire country is covered with a soft pink carpet of blooming cherry trees.

Say no to manners in public transport. Oh no, if you ever get on a bus in Japan of the child, don’t expect anyone to give their seat to you. Seats in public transport are not offered to women, children or the elderly. The rule is simple, first come first seated.

The fashion police are unheard of. Japanese street fashion is about bright colors, unusual things and crazy designs. It can vary from over-the-top cute, to extreme darkness. From styles inspired by fairy tales, to cyber looks. It is sometimes called a separate branch of contemporary art, where anyone can express him or herself through combining seemingly incompatible colors and accessories.

Restaurants order plastic food. Did you ever think what happens to a piece of cake standing at a shop window for the whole day? The Japanese Know how to deal with it. Local specialists make artificial food indistinguishable from real food. It is made from powder or wax to be displayed on restaurant counters as samples for customers.

Nothing makes your smile more charming than double teeth. It may look more like a vampire, but it seems cricket teeth or fangs are all the vogue in Japan. Women of the land of the rising sun are going crazyfor a crowded crooked tooth smile with accentuated canine teeth. The Hollywood smile in Japan is considered to open and provocative. Instead the reverse is in favor. Not just crooked teeth, but building up and correction, resulting in double teeth.

Landing a plane would be easier than coping with a toilet. Did you know that the no touch automatic flushing systems came out of Japan? The Modern panel next to the toilet in this country looks like the control panel in a spaceship. Even landing a plane would be easier than coping with it. It has dozens of buttons serving to turn on the bidet, or the shower, warm up the seat and even regulate the music. Japanese engineers have even added medical sensors to toilets. They could measure the level of blood sugar excreted in the urine, the pulse rate and blood pressure.

The weirdest museum with a sizeable collection. Japan has the most bizarre museum with a sizeable collection. The entrance to the toilet museum is proudly decorated with a human-sized gold heap of poop and several sculptures in strained poses. The exhibits inside include a children’s slide shaped like a toilet bowl. A collection of artificial animal and human excrement samples, interactive exhibits and funny hats. This is the world’s first faeces-themed museum.

An Island ruled by rabbits. Well, a place like that does exist, and not just inside your dreams. During World War II some rabbits were brought to Okunoshima Island, for secret scientific research. The program was later cancelled and the rabbits were set loose.

They didn’t waste any time, and now the island is teeming with these creatures attracting thousands of tourists. Well, that’s it, except for one little bonus that we prepared for you. What do you get when you cross jeans with a bikini? The bikini jeans! This provocative hybrid of bikini and Ultra Low-rise jeans is produced in Brazil, but finds its market mostly in Japan.