29 Things That Exist Only in Japan – Japan is known as the Land of the Rising Sun, but it could also be called the Land of singing toilets, or the country of the blue traffic light. There are so many things that make it a whole other world. Get ready to explore! 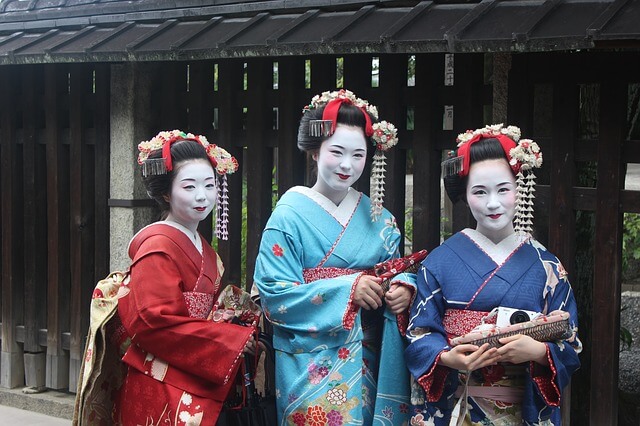 1. Square watermelons
They were invented back in the ’70s by a graphic designer to fit compactly in the fridge and be cut more easily. Japanese farmers grow them in special containers to get the shape. Since they’re pretty expensive, people don’t buy them as food, but rather as a decorative item.

2. Ramen noodles bath
The Yunessun Spa Resort in Hakone offers its guests the pretty unique experience of splashing around in a vat of pork soup and ramen noodles. While this may sound crazy to many people, the Japanese believe that soaking in such a bath is good for the skin because a broth made of pork is rich in collagen.

3. Bizzare flavors of Kit-kat
Chili pepper, wasabi, sweet potato, grilled corn, soybean, salt watermelon, mango, green tea – that’s only a short list of the Kit-Kat flavors you can try in Japan. Which one would you try? Let me know in the comments!

4. Fake food
Specialists make this kind of food from plastic or wax, and it looks just as delicious as the real one. Many restaurants use fake food to display their popular dishes in the windows and attract hungry clients. Usually, these replicas cost much more than the dishes they imitate.

5. Rabbit island
Back in the ’40s, scientists brought a number of rabbits to Okunoshima Island to do some tests. However, later on, the animals were freed and started to multiply. Now the island is full of them and attracts a lot of tourists.

6. Purikura machines
Taking photos in a booth is nothing new, but Japan added its own exciting twist to this experience. Their photo booths, called purikura, allow you to edit photos right on the spot, adding different backgrounds, funny stickers, or writings. Also, you can send the pictures to your cell phone.

7. People pushers
Subways and train stations get really overcrowded during rush hour. That’s why the station staff and part-time workers have to perform the routine procedure of pushing people inside trains to fit in as many passengers as possible before the doors close.

8. Umbrella parking lot
Before going inside a building, you can “park and lock” your umbrella just like you do with your bike. Now you can be sure no one will take it, and you won’t make a puddle on the floor if your umbrella is wet. Many government buildings, offices, and hotels have this sort of umbrella rack.

9. Millions of vending machines
Japan has more than 5 million of them! Mostly because they save time for people who work late hours, which is a pretty common thing there. Besides, Japanese vending machines aren’t just for snacks and soda. You can buy basically anything – from live lobsters to underwear – in these machines.

10. Tokyo’s biggest resident
In 2015, Godzilla was granted citizenship in Tokyo’s Shinjuku ward. The authorities presented a special certificate stating his new residency, and also made hima job offer – Godzilla became the tourism ambassador. Later, they even installed a Godzilla head 171-feet above ground at Toho, the movie studio that made the original movie back in 1954.

11. Train delays make headlines
Punctuality is a really big thing there, and train stations do everything possible to avoid a delay. If a train is 5 minutes late, the railway company might have to issue a delay certificate for railway workers and passengers who missed an important appointment. And if the delay is longer than an hour, then the railway company might give an official apology in newspapers.

12. “Silent” Karaoke
This is a special microphone with a cone that you place over your mouth. It muffles most of the sounds when you sing. It was designed for people who don’t want to wake up their neighbors, and those who feel shy about belting their favorite tunes in public.

13. Polite slurping
While in many other countries slurping is considered rude, in Japan it’s a way to show your appreciation of the dish. If you don’t slurp when you eat noodles, then the chef will think that you don’t enjoy the food, or that it’s cold.

14. Face napkins
When you eat a burger, it’s never pretty because your mouth gets covered in ketchup or mustard. Owners of one fast-food restaurant found a solution to this by serving burgers together with special napkins. They cover the faces of guests who feel a bit embarrassed about looking messy while eating.

Related :  20 Things You Can Only See in Japan

15. Water-saving sinks
They’re located right over the toilet tanks. The idea is simple: first you wash your hands over the sink, then it goes straight to the tank, and finally, you flush the toilet when you’ve done your business. So, you save water by using it twice.

16. Strange mayo
No, Japanese mayo doesn’t have any special recipe or ingredient. But they don’t eat it with salads, meat, and sandwiches; in Japan, people usually useit as a topping for ice-cream or on pancakes.

17. Naps at work
In Japanese culture, dozing off at the workplace – or inemuri – is considered a sign of being a hard-working person who’s very committed to their job. That’s why inemuri is so common, and no one thinks it’s a bad thing. Some people even fake it!

18. World’s shortest escalator
You can find it in the basement of More’s Department Store, which is located in the city of Kawasaki. The escalator has only 5 steps and is only 33 inches tall.

19. Canned food restaurant
Eating canned food may not sound like a delicious treat for you. But there’s a whole chain of restaurants all over the country where they serve only canned food. They’re pretty popular, since clients can choose from 300 varieties of food from all across the world.

20. Doll village
The village of Nagoro used to have a population of 300 people, but less than 40 residents live there now. A local artist, Tsukimi Ayano, made over 300 life-size dolls, most of which look like former residents; and they’re located in various states of action. For example, there’s a whole classroom of them in the village school that was closed a while ago.

21. No 4’s
It’s common for Japanese culture to avoid the number 4 because it’s considered tobe very unlucky. That’s why some buildings don’t have a 4th floor, stores don’t sell a set of cutlery for 4, and the number of guests to some event can’t be 4.

22. Blue traffic light
They use a blue color instead of green for traffic lights. The reason for that hides in their language: historically, there was only one word for both colors. When traffic lights first appeared in the country, they were as green as anywhere else. But that green color was still called blue. To make things right, the government decided to use the bluest shade of green possible.

23. Cleaning classes
Japanese kids learn how to clean in many schools because it’s a part of their education. They mop their classrooms and hallways, do dusting, and even clean the bathrooms. Teachers believe it’s a great way to raise responsible citizens.

24. Footbath train
Take the Tsudoi tourist train to get the most comfortable sightseeing experience. This train has footbaths built of aromatic cypress wood and filled with warm spring water that can soothe the pain in your joints. So you can soak your feet and enjoy beautiful views at the same time while traveling fromNagoya to Yunoyama Onsen.

25. Futuristic toilets
Toilets in Japan are very high-tech. To use one, a person should know what all those buttons are for. There’s a variety of functions, including heating the seat, spraying warm water to clean the user up, and even playing music.

27. Space-saving parking lots
Since Japan is a densely-populated country, they don’t like to waste space. That’s why their parking lots have a smart system. They’re designed like multi-level garages.

28. Robot-run hotel
In a hotel in Nagasaki, robots are a big part of its staff. It’s called the Henn-na which translates as “strange”. The human-like androids meet the guests, clean the rooms, carry luggage, make coffee, and even smile. However, real people work there too to recharge the robots and supervise how they perform their duties.

29. Café companion
Sitting alone in a café and enjoying your coffee and food is common for most people around the world. But in the Land of the rising sun, you’ll get a huge plush Moomin to sit next to you in one of the cafes, so you don’t have to eat alone.