9 Secrets of the Statue of Liberty Most Americans Don’t Know – The Statue of Liberty is one of the most (if not THE most) famous monuments in the world. Anyone visiting New York City can see her, but not everyone knows that Lady Liberty has her own secrets. One of them is – she might not even be a lady at all! Counting down from:

9. The Statue of Liberty was once split into pieces
It’s really hard to picture it, but the Statue actually arrived from France on June 17, 1885,in over 300 copper pieces. The precious cargo was traveling in 214 crates on the French ship, Isère. The iconic arm holding the torch wasn’t there, however. It was standing in Madison Square Park for 6 years to help raise money to sponsor the pedestal. When the ship carrying the statue arrived, 200,000 people came to welcome it to the US. The official dedication ceremony took place on October 28, 1886, with President Grover Cleveland presiding over it.

8. It was one of history’s first crowd-funding campaigns
First, French sculptor Frédéric Auguste Bartholdi raised funds in his country to build the statue. It wasn’t actually sponsored by the local government. When it was finished, the sculptor offered it as a gift to the US on one condition: they would build a pedestal for it. The federal government didn’t like the idea, so the status of the statue was unclear fora few years.

Then, American newspaper magnate Joseph Pulitzer stepped in. He basically started one of the first massive crowd-funding campaigns in history, promising every contributor an honorary shout-out in his newspapers. Even though 80% of the donations were small ones from middle-class citizens, Pulitzer managed to collect the necessary amount from over 120,000 donors. By the way, the famous sonnet “The New Colossus”, which can still be found on a bronze plaque inside the Statue, was also part of the fund-raising campaign. 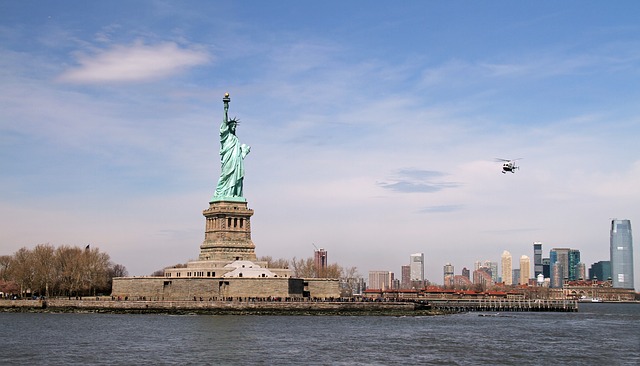 7. The Statue of Liberty wasn’t always green
The Statue of Liberty is made of copper, so it was originally about the same color as a penny. According to the New York Historical Society, it turned completely green because of oxidation by 1920. There was a time when it was half brown and half green. The new color survived the restoration, and they say the coating, called patina, won’t ever disappear.

Related :  Why No One Should Use Airport USB Charging Stations

6. It used to serve as a lighthouse
The statue was originaly supposed to serve as a lighthouse for ships sailing into New York Harbor. And, two years after it arrived in the US, it actually became one. For 16 years, the Statue’s lamp served as a beacon. But it wasn’t bright enough, and, running out of ideas to fix it, Bartholdi offered to cover the entire statue in gold to make it brighter. Congress said no to that idea since it would’ve been crazy expensive.

5. It’s all about number seven
It’s easy to notice the Statue has seven spikes on its crown, symbolizing universal liberty across the seven oceans and continents. The less obvious reference to the number 7 is in the number of windows in its head – there are 25 of them, which makes seven if you add up the digits. There are 16 leaves around the torch, and the monument itself is 151 feet tall. The sum of both those digits is seven as well. Clearly, that number meant a lot for the Statue’s creators.

4. The construction supporting the Statue was designed by Gustave Eiffel
The pedestal of the Statue of Liberty was built in old Fort Wood on Liberty Island. It currently hosts museums that show the history of the Statue with old photographs, videos,recorded oral stories, and the original torch Lady Liberty was holding in 1886. Famous engineer Alexander Gustave Eiffel (sound familiar?) helped design the steel internal framework to keep the statue stable.

It’s strong enough to withstand around 600 bolts of lightning a year. When the wind is high, the Statue can sway by around 3 inches, and it’s torch – about 5 inches. 354 steps lead up to the crown of Lady Liberty, which is open to visitors; but the torch is off limits. Speaking of visiting the statue, have you ever been there? (I have, and walked all those 300 some steps to inside her head and looked out through those windows. It was kinda claustrophobic, and very cool). Or maybe there is some other iconic monument you have climbed?Share your experiences in the comment section below!

3. It might have masonic ties
There’s a popular theory claiming that the Statue of Liberty was originally supposed to be dressed as an Arab peasant woman and stand at the southern opening of Egypt’s Suez Canal. The ruler of Egypt couldn’t afford it, so Bartholdi redesigned it, giving it a different dress and new name, and sent it as a gift to the American people to celebrate the anniversary of the American Revolution.

So what does that have to do with the masons? Well, Bartholdi himself was a freemason. He represented the French Grand Orient Temple Masons, hence his interest in Egypt. He supposedly wanted to put the statue there to symbolize “the Orient showing the way”. The torch Lady Liberty is holding is an important symbol in the Masonic culture as the “Torch of Enlightenment” or the “Flaming Torch of Reason”. The masons also took part in the cornerstone laying ceremony in 1884, and the grand master,William A.  Brodie, presided over it in the company of grand lodge members.

2. The face of the Statue of Liberty could be that of a man
When you think of the Statue of Liberty, do you see it as a she? Most people are positive it’s a representation of the Roman goddess of freedom, Libertas. The widely accepted story is that Bartholdi modeled her face after his mother. Author and journalist, Elizabeth Mitchell, however, claims that the sculptor actually used his brother’s face as a model!

As she was studying the photographs of Bartholdi’s family, the writer noticed his mother had a different eyebrow shape, thinner nose and lips, and smaller mouth. Then, she pointed out the striking resemblance between the sculptor’s brother in his adult years and the statue. Because of his mental health condition, Bartholdi’s brother spent years at the hospital, and Frederic would spend hours watching him. That could’ve helped him recreate his face in every detail.

Another theory was presented by French writer Nathalie Salmon, who claims Lady Liberty was modeled after her ancestor Sarah Salmon. According to her, Bartholdi found Sarah’s features particularly beautiful. Even though she had immigrated to the United States, she and her husband visited the sculptor at his studio when they briefly went back to Paris in 1875. He could’ve used that opportunity to draw Sarah, and later used those images as a model.

1. There’s more than one Statue of Liberty
And I’m not talking about its plastic souvenir versions, or the one on Las Vegas Boulevard. You can find a smaller Statue of Liberty, which was the original model for its big sister,in the Jardin du Luxembourg in Paris. It’s been there since 1906, after Bartholdi gave it to the Luxembourg museum for the World’s Fair of 1900.

Another version of the iconic monument was erected on an island in the Seine River to celebrate the 100th anniversary of the French revolution in 1889. It has two dates on it – July 4, 1776, and July 14, 1789, symbolizing the friendship of two nations, and the importance of revolution. There’s also a life-size copy of the torch on the Pont de l’alma in Paris. People from around the world sponsored its construction as a symbol of Franco-American friendship.

It was set not far from the Eiffel Tower on the 100th anniversary of the Statue’s dedication. The Statue, of course, has also inspired numerous public and modern art projects, and one of its most famous replicas greets the visitors of a toy store in Times Square.