All the Best Ways to Get Rid of Ants in Your House – If you have ants in your pants, that normally means you can’t sit still, and have too much energy. Or it might mean you actually do have ants in your pants, and that’s highly creepy. Now, when ants start an invasion of your home and yard, you gotta be prepared to fight them off.  If you aren’t a huge fan of chemical pesticides (and I hope you aren’t, since they can be harmful for humans) – there are natural ways to get rid of those annoying insects and keep them out for good. 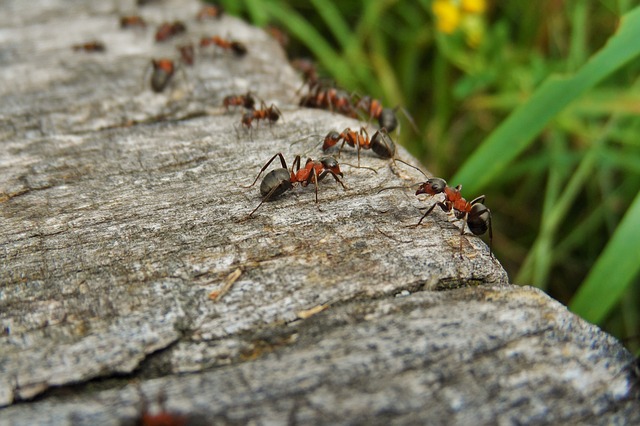 1. Citrus fruits
You might love the smell of oranges, lemons,and grapefruit, but ants just can’t stand it, use this knowledge to your advantage and leave some ground, dried citrus peels near entry points to the house, in flower beds,and in potted plants to scare away ants. Spraying openings, sinks, counters, and table tops with pure lemon juice or even lemon scented cleaner day by day should also bring visible results. Ants will lose their sense of tracking and won’t be able to detect the odors of food particles and residue they’re naturally attracted to.

2. Cucumber slices
Similar to citrus fruits, cucumbers smell like trouble to ants. Apparently, there’s something in their chemical composition that eliminates the fungi that ants love a lot. So find the hot spots in your house where ants are most frequently visiting; normally around food and water, and also any gaps, crevices, and holes. Leave some cucumber peels or slices in these places. This is a quick and temporary solution for visible ants, but make sure to remove the cucumbers after a few hours since you don’t want to attract cockroaches, which aren’t afraid of them.

3. Peppermint
If you have ants in your kitchen and bathroom, you can repel them using peppermint essential oil. Sprinkle cotton balls with a few drops and leave them in areas where the ants hangout. You can also mix equal parts mint scented liquid soap and water in a spray bottle and then spray it directly onto a group of ants. Believe me, they won’t like it.

Related :  Why Mosquitoes Bite Some People More Than Others

4. Cinnamon
Cinnamon works as a double agent: it makes your house smell like a dream and helps you defer ants at the same time. Powder, oil, and sticks are all good for this purpose. You can just sprinkle your regular kitchen spice at entry sites to disrupt the ants’route. You can draw a dry cinnamon barrier line, or a cinnamon oil line, with a cotton swab.  If you mix cinnamon oil with water in a spray bottle and sprinkle it on ant trails,windows, doors and cracks, it’ll have an even stronger effect. Cinnamon sticks casually thrown around the hot spots will also do the trick.

5. Coffee grounds
Before you throw away used coffee grounds after you enjoy a hot cup, remember they can,in fact, be of good use to you. Put them right in the cracks, sprinkle them around the flowerbed, or even the entire base of your house. Ground coffee will be even more effective if you mix it with a few drops of peppermint essential oil and spread it on counter tops, near the garbage can, and other places ants love to frequent.

6. Tansy
Tansy flowers might look cute to you but not to the ants! Plant it near your front door,under full or indirect sun and in pretty dry soil, or among other plants you want to protect from ants.  You can also keep dried tansy flowers by the window sills to repel those nasty insects.

7. Diatomaceous earth
Food grade diatomaceous earth is a fine silica powder of fossilized algae. It’s perfectly safe for humans, but dangerous for insects. Sprinkle an ant trail or the perimeters of your house with it for instant anti-ant results. Make sure you keep it dry or it won’t work. You might have to add more than one layer for the best outcome. If you decide to put it in a flower bed, watch out for petals – bees won’t be able to do their job if they encounter this substance.

Related :  What Happens to Your Body When a Mosquito Bites You

8. Chalk
No ant shall pass a border made of chalk,since they can’t walk across powdery materials. It also messes up their scenting abilities. So draw a line around your front and back doors, and windowsills. You can ask your kids to do it to make it more fun.

9. Baking soda and powdered sugar
Ants love sugar but can’t stand baking soda. The smell of sugar will attract them, and baking soda will say “hi” to their digestive system, and the results are pretty dramatic for them. Mix the ingredients in a 1 to 1 ratio, ¾ tablespoon of each should be enough for it to work. You can put the bait on a jar lid, or directly into areas that ants love. The insect won’t know the difference between the sugar and baking soda, and you already know what’s gonna happen.

10. Cornmeal
Cornmeal isn’t the quickest way to ruin an ant colony, but it’s completely harmless to humans and super cheap, so you might want to give it a go. Sprinkle it on ant trails and nests. The insects will see it as food and have a feast, but they won’t be able to digest the meal.

11. Vinegar
Another affordable thing ants totally hate is vinegar. Mix it in a 1 to 1 ratio with water in a spray bottle. You can spray it onto the ants, around the windowsills, door ways and places that ants love. You can even wash floors, windows, and counter tops with this solution – this way you’ll get them both super clean and ant-free. And, there’ll be no scent left behind after it dries.

12. Borax, water and sugar
Make a thin paste of powdered Borax laundry booster, sugar and water in equal parts. Put a few tablespoons of it on a jar lid and set the bait. This solution attracts all possible kinds of ants with its sugary smell. They’ll want to eat it, so they’ll bring it back to the colony and ingest it there.

Related :  What to do When You See an Injured Bird

You can experiment with the ingredients a bit and add a touch of peanut butter to make the mix even more attractive for the insects. The paste dries in a couple of days, so if it hasn’t worked by then, you’ll have to make some more of it. The mix is also effective against cockroaches. However, you should be careful with this solution if you have kids or pets in the house.

13. Boiling water and dish soap
Another ant secret they don’t want you to know is that they just hate hot water. Yes, something as simple as that makes them tremble with fear.  A spray bottle with water and liquid dish soap can help you get rid of visible ants. And even just pouring a kettle of boiling hot water directly onto their colony is more powerful than you can imagine. It will also kill the weeds if you have any in the sidewalk cracks. One thing you have to remember, though, is that it can kill the good plants, so watch out for those as you’re pouring hot water onto your yard.

14. Mini moat
Most ants just go for the food, but some love plants, both potted and planted ones. To prevent them from building a home in what’s adding aesthetics to your own home, try setting up a moat filled with water, much like people did in ancient times building fortresses. Put the container with plants on a tray filled with water.

You can sprinkle cinnamon powder in it for an even stronger effect, or put a cinnamon stick directly into the soil. The same moat trick will work with pet food bowls. Set the bowl in the center of a tray or lid that’s larger in size so that it’s surrounded by the water. Ants can’t swim, so they won’t be able to get inside the bowl.

So Have you tried any of these solutions, or maybe you know some others that work?. Let me know down in the comments.