Are Night Flights Allowed for Helicopters? – Imagine you’re stuck on the slopes of Mount Everest. There’s no one to help you for frozen miles around, and you can’t move for some reason. Although you’ve sent a distress signal, the night has already fallen, and you’ve lost all hope. But then, out of the cold darkness, a beam of light blinds you.

It’s a rescue helicopter, coming for you at last. Despite a weirdly popular opinion, this situation is possible. Tricky, granted, but rescue helicopters do fly at night. And not only rescue ones: police and fire choppers do too. The myth about night flight operations might have appeared because of one fact: helicopters are really difficult to fly.

And that’s a real problem that can preclude a chopper from flying at night. But it depends on many more factors than just poor visibility. First, helicopters have a rather low altitude limit. Unlike jet airliners, which fly at heights of about 36,000 ft, choppers rarely climb higher than 15,000 ft. The altitude record for a helicopter stands at 40,820 ft, of course, but that’s the absolute maximum — you can’t go any higher on that bird.

This has to do with the difference in how they fly. With airplanes, you have two fixed wings (technically even one, but that’s another story) and powerful jet engines that propel the aircraft forward. The wings and engines combined give the airplane the amount of lift necessary to fly at high altitudes. 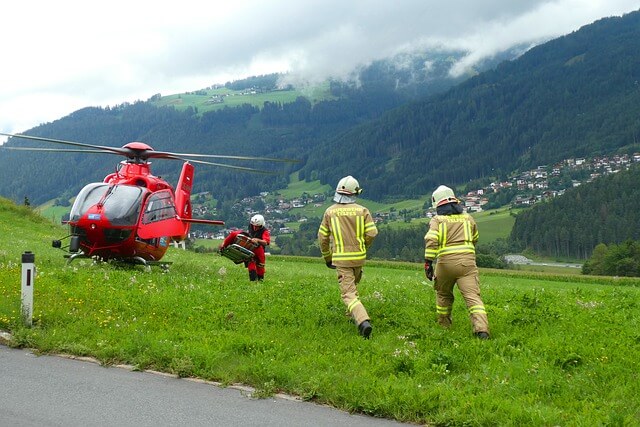 When it comes to helicopters, though, the picture is rather different. They have one or two rotors with long blades that lift the craft into the air. Now think of it in terms of altitudes and you’ll see where I’m going. Thanks to jet engines and fixed wings, airplanes move fast and can support themselves at great heights without loss of control.

No wings for helicopters means that all they could do is rotate those blades faster to keep the height. But there’s only so much speed they can muster, so choppers start to behave badly when the air gets thinner. Yet this isn’t all there is to it. Helicopters are not designed for high-velocity flights.

Related :  How Autopilot Works, And Why Planes Don't Fall Down

But although they’re slower, they’re much more mobile and can take on missions that are literally impossible for airplanes. For one, choppers don’t require a runway. All they need to take off or land is a clear space of a diameter that allows their blades to turn safely. This makes them indispensable in rescue operations, like in my very first example.

Secondly, they can hover in the air thanks to their construction. This also helps in different kinds of situations: rescuing people, extinguishing fires, deploying troops, or whatnot. And thirdly, helicopters are generally smaller than airplanes, which, combined with their lower speed, makes them very maneuverable.

That’s one of the main reasons why it’s choppers that are sent to search for lost people from the air, not airplanes. Take mountains for instance: no aircraft can fly in ranges such as the Himalayas because the turbulence above them is downright dangerous for airplanes, and their high speed makes flying between the mountains on low altitudes all the riskier. Not to mention that there’s no place for an airplane to land.

So helicopters it is, then. But despite all their advantages over airplanes, choppers have many potential dangers too,which makes flying them a risky business. Helicopters don’t have an ejection system You probably know that fighter jets and some other airplanes are equipped with an emergency system that allows the pilots to catapult from the cockpit and save their life in case of a serious threat.

But the thing is, they get ejected straight up, leaving the aircraft to fall to the ground. Now, if you just remember that a helicopter has those swiftly rotating blades above the cockpit, you’ll realize that such a system is simply not applicable to choppers. So the pilot has to stay inside the machine no matter what, reducing the chances of survival in case of a crash.

They have much weaker protection Airplanes are built to withstand huge pressures and high speeds. They have a thick hull and sturdy windshields, which protect them even from occasional birds that might slam into the plane. They’d have to make an emergency landing after that, sure enough, but in most cases they’ll be just fine.

With helicopters, it’s much less safe. They don’t need such protection because they don’t fly as high or as fast, and extra armor would just increase the cost of their production. Neither civil helicopters, nor emergency service ones have any special reinforcement, so they’re basically unprotected in the air. According to the FAA, low-flying helicopters are particularly vulnerable because of drones.

If one of those automated fliers collides with a chopper, it can result in a crash more often than not. Same goes for birds, too, but at least the feathered guys have brains of their own and know better than to mess with helicopters. They can’t fly in bad weather Well, they obviously can, but it’s very dangerous — in fact, much more so than flying an airplane.

Apart from the reasons I’ve already mentioned, there are other hazards that are specific to helicopters only. One of them is icing: when the air is particularly humid and the temperature freezing, ice can appear on the helicopter’s surfaces. It might seem a nuisance, but given the pretty fragile construction of these aircraft, you shouldn’t be surprised that ice may cause control issues or even crashes.

Low visibility is another huge problem for choppers, since a pilot can’t take off or land when they don’t see their surroundings clearly. A single mistake at this point might cost them the expensive aircraft and their own priceless life. But even good weather can pose a threat, since there’s such a thing as clear air turbulence,or CAT.

It’s an unpredictable condition that occurs when there are no clouds and the aircraft is flying at a higher altitude. The slowly moving air in the atmosphere collides with the rapid air currents created by the helicopter’s rotor blades, resulting in turbulence. It can be a dangerous thing, and only experienced pilots know how to deal with it effectively.

Helicopters are hard to control I’ve already mentioned it earlier: compared to airplanes, helicopters are a real challenge to fly. Take for instance a Coast Guard chopper responding to a distress call from the sea during a storm. To rescue the crew of a sinking ship the pilot will need to hover the aircraft directly over it, fighting not only the fierce winds, but the waves as well. The ship will be bobbing on them and constantly shifting its position, so the helicopter should be able to adapt to these chaotic movements.

And it’s not a 5-minute operation, you know!Sometimes rescue ops may take up to an hour, so it’s a real test of endurance and skill for the pilot. Also, there’s a reason why choppers mostly don’t have an autopilot. Some of the newer aircraft do have this function, but up until just a few years back it was unheard of.

In an airplane, autopilot basically keeps the aircraft on its course, set by the human pilot. It doesn’t need to run any complex commands apart from “stay locked on”. The airplane then can fly itself almost effortlessly, since it’s gliding through the air with the help of its turbines and wings. In a helicopter, an autopilot could only be useful on long-haul flights with minimum obstacles on the way.

If the pilot ever needs to stop and hover in the air, they’ll have to do it manually because it’s a complex operation. One case that explains it all: a helicopter pilot shared a story about how he accidentally knocked his headphones off mid-flight. They couldn’t be readjusted with just one hand, so he had to land the chopper, put the headphones back on his head, and only then take off again. You simply can’t take both your hands off the steering in a helicopter. And don’t get me started on Helicopter Parents! They don’t know when to stop hovering over their kids.