Can Sharks Smell Blood from Miles Afar? – The chances that one day you’ll become the victim of a shark attack are miniscule, small, shall we say, teeny tiny. And still, there are dozens of frightening myths surrounding these predators, even though most of them are misconceptions. What about the belief that sharks can smell a drop of blood from miles away? Is it true? Well, I don’t want to keep you in suspense, so I’ll tell you right away: this statement is seriously overblown. And while some shark species can identify the smell of blood from a quarter of a mile away, it doesn’t reach them right away.

Even more shocking, the smell won’t necessarily provoke an attack. Although I’ve been told that my smell will. (Very funny, alright, who wrote that in my script?) It’s true that sharks have a very developed sense of smell that’s hundreds of times stronger than yours. Just like humans, they have nostrils, which are situated beneath their snouts.

But their nostrils are designed specifically for smelling rather than breathing. So it’s probably no wonder that sharks can detect tiny amounts of different substances in the water. But even though some sharks can decipher smells better than others, no shark will be able to smell your blood in the water from farther than a thousand ft away. 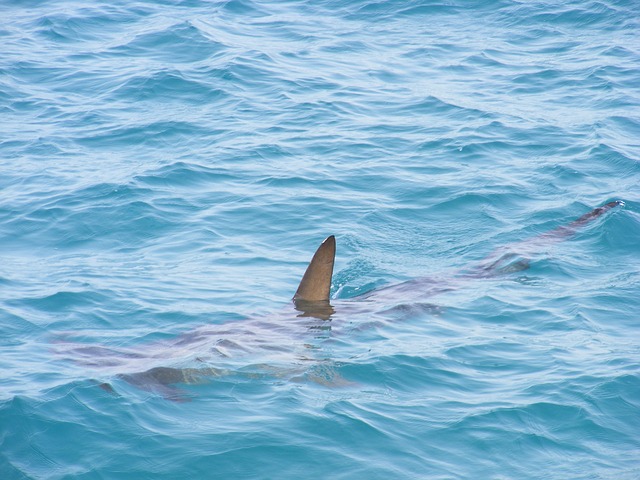 Now, let’s imagine that you cut your foot on a sharp stone while swimming in the ocean. First, the smell of your blood would have to travel the distance to a shark’s nostrils. And how fast it goes will depend on the water currents: the more active they are, the faster the smell will reach the predator. Then, the shark would have to decipher the smell and find it alluring enough to react. And finally, it would need some time to reach you. So, you can relax, you’ll have enough time to get back to the safety of the beach, and get a band-aid for that cut.

And maybe a Pina Colada. By the way, few people are aware that sharks aren’t that interested in hunting humans. Most of them are very particular about their diet. For example, the lemon shark, which can smell a teeny drop of blood in the water from quite a distance, doesn’t have people on its menu whatsoever. Mollusks and bony fish? Gladly.

Related :  Most Venomous Spiders In The World

An occasional seabird or a smaller shark? Why not. A human? Eww, no thanks. By the way, have you ever seen a shark, in the wild or in an aquarium?If so, write about your experience in the comments below! Anyway, that’s only one of the many myths that surround the deadly predator. Let’s debunk  several more! – There’s a stereotype that sharks purposefully hunt humans.

But most shark attacks happen because these predators mistake swimmers for their usual prey, like seals or sea lions. The other reason why a shark might attack is its curious nature. This predator tends to bite things to figure out if they’ll make a suitable meal. Just humans do at a buffet. – There’s an opinion that once a shark stops swimming, its life will be over.

However, this idea is only partially true. First of all, it’s important to understand how sharks breathe. In fact, they can do it in two ways: buccal pumping and ram ventilation. While using the first method, sharks pull the water into their mouth with the help of their cheek muscles and then expel it through their gills.

And this method allows predators to lie on the seafloor without movement. But if sharks use ram ventilation, they have to keep moving so that the water moves over their gills. That’s why most people believe that without constant swimming, sharks won’t get the oxygen necessary for life. But the catch is that only 20 or so shark species out of more than 400 use ram ventilation alone.

And it’s actually true that a few shark species won’t be able to breathe if something prevents them from moving. But the rest of the predators use either both breathing methods or the buccal pumping method,and can easily rest on the seafloor. – Have you ever heard of sharks jumping out of the water and knocking someone off of a boat? If you believe this myth, you’ve probably watched too many thriller movies!

Some shark species, such as the great white shark, are indeed capable of leaping more than 8 ft into the air to catch prey, for example, seals and birds. But, unless you’re in South Africa, you’ll have a hard time trying to find sharks jumping out of the water. – It’s been said, “If a shark is heading toward you, hide among jellyfish.

Related :  How a Snake Gets into Your Bathroom

“Well, if you want to waste your time and hurt yourself, go ahead. But the truth is that sharks have really thick skin, and jellyfish stings will feel like nothing more than a tickle. Admittedly, these predators have quite vulnerable eyes, but sharks can protect them by covering them with special membranes.

You, on the other hand, will fall victim to extremely painful, and often venomous jellyfish stings. So don’t be like Dory! Oops that was a spoiler. Sorry.

– It’s another common misconception that all sharks are predators. For instance, the ginormous  whale shark is, in fact, a friendly giant which has to filter plankton through its modified gills to feed itself. And the bottom-dwelling nurse shark is a suction feeder, whose diet includes mostly sea urchins, lobsters, and small stingrays.

– It’s not a good idea to make the assumption that if a shark hasn’t attacked anyone, there must be no sharks in this area. Sharks live in all the world’s oceans, both in coastal waters and the deep sea. What’s more, some sharks can even be found in lakes and rivers with fresh water!So, if you don’t see a shark, it might mean that it’s just not interested.

– If I ask you to describe a shark, you’ll probably tell me about large, torpedo-shaped animals with several rows of mega sharp teeth. But in reality, sharks come in all sizes and shapes. Among more than 400 species, there are both tiny ones, like the 8-inch-long deep water dogfish, and impressive giants, such as the 40-ft-long whale shark. The basking shark, for example, has tiny teeth which don’t even participate in the process of feeding. And the horn shark has several teeth which look like molars. The predator uses them to crush hard-shelled prey.

– Despite their reputation as merciless and fearless monsters, you can stare a shark down or intimidate it. If you’re in the water, and there’s no way to escape quickly, start screaming, show aggression,swim toward the shark, and make eye contact. The thing is that most victims of shark attacks were hurt because they didn’t see the predator before it lunged. But once you notice a shark, the only thing you should worry about is your reaction. Don’t panic, and try to stay calm. Or point out to the shark that other guy swimming over there. He might take the hint.

Related :  10 Effective Ways to Stop Fleas from Torturing Your Pet

– Sharks hang out mostly close to the surface. If you hear this statement, you should remember that it’s nothing but a misconception. It probably exists thanks to the stereotypical image of a shark’s fin snaking through the water. Most sharks don’t often stay anywhere near the surface; they prefer lurking in the depth where there’s more food.

– There’s an opinion that sharks can’t bite their prey until they turn on their side. But it’s not so: sharks can attack and bite from any angle. Just like me. (Really c’mon guys, whose tampering with the script?)

– If you hear someone saying that sharks live for thousands of years, keep in mind that it’s also a myth. The average shark’s lifespan doesn’t usually exceed 70 years. However, there is one exception. The Greenland shark has the longest lifespan among all vertebrate species! This animal lives to be a staggering 300 to 500 years old! Scientists believe that the low temperatures Greenland sharks live in, along with their great size, provide the animals with an extremely slow metabolism. And this, in turn, makes them age more slowly.

– Sharks do NOT have a tongue, despite what some movies may show you. On the other hand, they have something that looks similar to the human tongue, but this organ is called the basihyal. It’s just the front section of the cartilage that goes from the shark’s chest to its mouth. Moreover, instead of participating in the process of feeding, this organ is necessary to support part of its skeleton.

– It’s a very common misconception (thanks, movie-makers!) that sharks can swim backwards,for example, while backing out of a trap. In reality, it’s as far from the truth as it can be. Sharks do NOT and can NOT swim in reverse. Their tails propel them, and their pectoral fins help them to keep balance and turn. Thus, anatomically, the predators can’t move in any other direction other than forward. Bottom Line: Take to heart the great advice from sharks and: Keeping Moving Forward!