Facts of Cockroach That Can’t Get Rid – It’s the middle of the night and you find yourself needing to get up out of bed to go to the bathroom. You’re still half asleep as you do your business and then finish on the toilet to go wash your hands in the sink. Your view is slightly blurry through your sleep crusted eyes, but something alerts your attention in the reflection of your mirror.

You see what looks like a speck on the wall behind you. You wipe your eyes to see more clearly, horrified when you realize that the speck is a cockroach! At once you are startled by the sight of it, grossed out and disgusted! It is obscene and enough to make your skin crawl. For most of us, bugs, especially cockroaches, are just plain nasty to have around the house.

If you live with cockroaches, you may feel the immediate need to use insecticide to poison them. Scientists have recently reported, however, that this approach will not work because,like it or not, roaches are highly adept at survival. How are they able to survive so well? And is there any effective way to get rid of them? 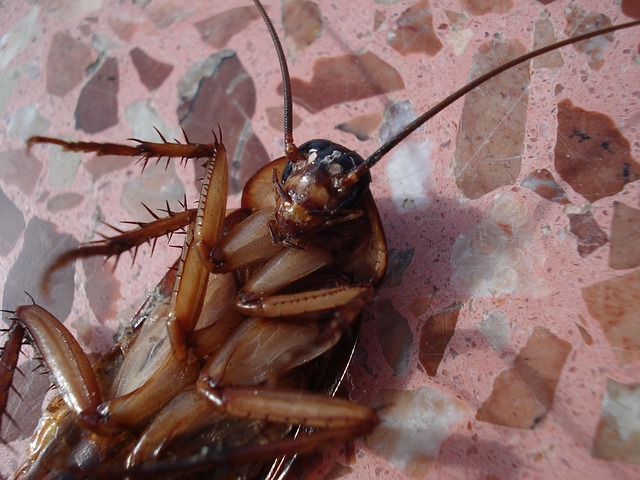 In any given population of roaches, there may be one, two or more that possess an immunity to an insecticide. So, let’s say you spray a group of them with toxins and all but a few of them drop dead. The ones that died were susceptible to the chemicals and did not live to pass on their genes. The survivors, however, are free to continue living and they pass on their insecticide-resistant genes to their offspring.

So, then the next time you use insecticide on them, only a few unlucky, susceptible roaches actually die from it. This is because the population has become impervious, thanks to those hardy survivors from the initial treatment who went on to create more immune roaches. Before you know it, you have an epidemic on your hands that insecticide won’t help you with.

Cockroaches, as a species, are 300 million-year-old insects. They’ve been around for a very, very long time and are not likely to disappear anytime soon. They may even inherit the Earth following a nuclear disaster. After the United States dropped atomic bombs on Hiroshima and Nagasaki in 1945, it was mentioned that cockroaches were among the Japanese cities’ only survivors.

These incredibly tough, little creatures simply refuse to go down without a fight. So, perhaps you’re thinking now that you may as well give up on trying to get rid of them. Maybe instead of fighting that next roach by spraying poison on it, you should give it a name and buy it a diamond-studded collar with a leash to take it out on walks.

After all, if you can’t get rid of them, you may as well derive some sort of companion ship out of the situation, right? Walking your pet roach would be an interesting conversation starter with anyone that you pass along the street. Perhaps you could even use it as an icebreaker to help you speak with your crush.

But be warned that, in all likelihood, she might be more creeped out than impressed by your little friend. Before you decide you need to go home to feed your new pet cockroach, you may want to consider that, not only are they gross to look at, but they are also bad for your health. As disgusting as it sounds, roaches shed tiny bits of dust from their bodies and this dust is an allergen that can provoke or worsen symptoms of asthma.

They also carry pathogens like salmonella and E.coli. So, unlike with a dog or a cat, when your pet cockroach sheds, it has the added risk of making you sick. With this in mind, it can be stated with a certain degree of confidence that these creepy crawlers are not good to have around. So, then how do you get rid of them? Is the situation as hopeless as it may seem? Maybe not.

Rather than using poison as your method of choice for eliminating these pests, physically removing them may provide you with a better, long-term solution. This includes using special vacuums to suck up the little monsters. You can also lay down sticky traps to capture them. To further combat against having roaches in your home, you should also make sure that you don’t leave anything out that may be tempting them to stick around.

For instance, make sure you take out your trash once a day. Leaving out your leftover pizza delivery boxes from last night or two nights ago might create a Disney World for the roaches, enticing them to view your house as their own personal paradise. So, make sure to be clean and tidy so as not to make it easier for them.

Also, it is advisable not to leave out any pet food for too long – we mean regular pet food like for your dog or your cat, not for your pet roach – though we’d assume with a certain level of common sense that roach food, whatever that might look like,would also prompt them to stay. So, for the sake of keeping the little creatures away, don’t leave anything eatable lying around the house for too long.

If you do all of these things and you still can’t seem to get rid of them, the situation may not be as completely hopeless as it seems. Though they are quick at developing resistance to insecticides, they may also be quick to develop susceptibility to them. Since roaches only live for about 100 days and have many offspring, it may only take a few generations for them to re-evolve susceptibility to insecticide.

Related :  Can You Make Your Pet Go Vegan?

This means that if you take a break from using it for a while, the chemicals may become effective at killing them once again. So, you may not necessarily have to give up the use of insecticides entirely. Just do your homework and be mindful about when and how often you use it. In order to test the true levels of their resiliency, a study was conducted on German cockroaches, whereby they were subjected to different levels of radioactive metal cobalt 60.

Though a whopping 10 percent of cockroaches were able to survive exposure to 370,000 becquerelsper m^3 of cobalt 60, none survived exposure to 3,700,000 Becquerels per m^3. To put this into better perspective, 3,700 Bq per m^3 of cobalt 60 is enough to kill a person in 10 minutes. So how do these tiny bugs manage to outlive us in such conditions? Scientists attribute the cockroaches’ survivability to their simple bodies.

Their cell cycles are also slower than a human’s, making them less sensitive to radiation. So, although it is possible that cockroaches would take over the planet upon nuclear devastation, even these ancient insects are not entirely invincible. If an explosion were to be powerful enough, they wouldn’t be able to continue on. So, what do you think of this? Do you feel better or worse about your situation with cockroaches? Let us know in the comments.