How To Actually Survive Getting Shot – We’ve all seen the Hollywood movies where the good guy has an epic shootout with a thousand bad guys, and after gunning them all down, the lead bad guy fires off one bullet and hits our hero in the shoulder, or maybe the leg- somewhere painful but, you know, not lethal. Then the bad guy goes down in a hail of gunfire as the hero wins the day through superior firepower.

What’s not shown in these hollywood movies though is just how dangerous it is to get shot- yes, even a quote- flesh wound- end quote. Today though, we’re gonna explore what happens to your body when you get shot and how to survive a gunshot wound. Obviously nobody thinks a gunshot to the head is a great idea, but surely getting shot in the shoulder or the leg will make you look pretty heroic and maybe hurt real bad, but not be life threatening?

Sadly, it’s time to toss all of those myths out the window, because yes, even a shot to the shoulder and especially the leg can be fatal. Bullets travel fast, that’s why Superman is famously portrayed as ‘faster than a speeding bullet’. What you may not realize though is just how fast they travel. 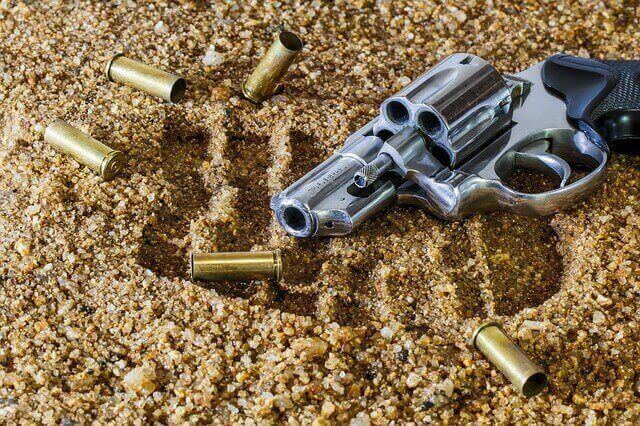 Those incredible speeds means that they contain an incredible amount of kinetic energy. Bullets however are very small things, most are under an inch- but what they lack in mass,they more than make up for in acceleration, and remember that in Newton’s Second Law of Motion the relationship between speed and kinetic energy is not additive, it’s quadratic.

Related :  How to Catch Snake in House Safely

With such incredible velocities, even small rounds can deliver a truly terrifying amount of energy. Take for example the humble 9 mm bullet, even with its small size it can still deliver on average 542 Joules of energy, while the 5.56 mm round packs around 1763 Joules, and the 7.62 round around 3525 Joules.

When a bullet enters the body all of that energy it’s carrying has to go somewhere,and that’s going to be your soft, fleshy body tissues. As the bullet enters, the shock wave of the impact causes your flesh to expand and creates a large cavity, which then very quickly falls back in on itself. This huge shock through your body’s tissues can severely damage internal organs, even if the bullet didn’t actually pierce any of them.

Next is damage that bullets cause once they’re inside your body. In the movies the good guy gets shot in the arm or leg and the bullet is fished out and the wound cauterized and bam, just like that the hero is ready to go back to chewing bubblegum and kicking ass. In real life things tend to get messy, specially if the bullet’s final stop is somewhere nice and bony like a shoulder.

That’s because bullets are very prone to fragmenting once hitting something solid like bone dueto their incredible velocities, and the fact that bullets tend to be made up of layers of different materials. Striking a bone, or sometimes even just the extreme stresses of rapid deceleration inside the human body, can be enough to fragment a bullet into many pieces, and this can make things really messy.

Fragments of the bullet will explode outwards in different directions, causing even more damage to surrounding tissues and organs. Bullets that retain most of their mass are even prone to bouncing around inside the body cavity if they happen to strike bone, and needless to say having a piece of very sharp, deformed metal bouncing around inside you like a pinball machine is not great for your health.

Related :  3 Killer Tips - How to Choose a Web Host

The body is notoriously allergic to being shot at, and it tends to react to bullet wounds by trying to pump as much of the blood you have inside you into your immediate vicinity. This rapid and extreme blood loss is what makes bullets so potentially fatal, as even severe organ and tissue damage can be repaired, or survived, given a fast enough medical response.

With all of your red, red kroovy leaking out of you at an alarming rate though, death is just minutes or even seconds away. Top scientists have labored for decades and have at last determined that the best way to survive getting shot at is to try and keep as much of your blood inside your body where it belongs.

So our survival tip number one for surviving a gunshot wound is to apply immediate pressure to the wound site. You want to try and wrap bandages of some sort, even dirty t-shirts would do, around the wound itself and maintain constant pressure in order to slow the blood loss. If shot on a limb, elevate it above the heart to minimize blood loss and keep that pressure on.

You should very quickly be on your way to the hospital, but if you happen to be on a solo Rambo-eseque mission in the middle of the jungle against evil drug lords, then the important thing is to maintain pressure and never, ever remove the bandage- no matter how bloody they get. Removing a bandage on a wound can actually tear open the wound again after your body has worked very hard to seal it up through coagulation.

Of course you could try the popular Hollywood method of cauterization, which is a very good way of stopping blood flow- if you know what you’re doing. Only certain types of wounds can be successfully cauterized without submitting large parts of your body to terrible third degree burns- and even worse, without very prompt medical attention those third degree burns could pose an even greater risk of deadly infection than your single bullet wound.

If blood loss can’t be stopped or slowed down significantly and the wound is on a limb,it’s time to take drastic measures. You’re going to want to get your hands on a stick and tear up your shirt into a long strip. Tie the shirt above your wound but before the torso, and then wrap the ends of the shirt around the stick and start turning the stick in circles like a crank.

This will tighten the shirt around your limb to painful levels- but you need to keep going. You need to tighten your makeshift bandage so tight that it cuts off all blood flow to your wound, and yes, this does mean that if you don’t get very prompt medical attention,you will end up losing the limb. Without blood flow, the limb’s tissues will die off, but your life will be saved by preventing you from bleeding out.

Tourniquets, as these makeshift devices are known, can be life savers, and are a last-ditch measure to save someone’s life. In the end the best way to survive a gunshot wound is to not get shot in the first place,but if you do get shot you need to remember to keep constant pressure on the wound, and as a last resort, create a makeshift tourniquet and tie off the affected limb.

Better to lose an arm or a leg than to bleed out and die. With modern medicine even the most grievous gunshot wounds can be very survival, and doctors often talk about the ‘golden hour’, where if a trauma victim can be on a surgical table within an hour, that person’s life can likely be saved. What other tips for surviving a gunshot wound do you know of? Let us know in the comments.