How to Identify a Bug Bite and What to Do With It – Ah yes, summer’s at its peak, and you’re going out to have some fun. At a barbecue, by the sea, in a park or on a lake shore. But wait! Who’s gonna bug you, and spoil all the pleasure? Someone very small, but very annoying. Yes, it’s those two-year-old twins running a muck, spilling the lemonade and pulling the doggie’s tail.

Aren’t they a handful? Where are their parents? Anybody got a leach? Okay actually, this isn’t about them. It’s about some other pests. Yep, Insects. There are zillions of them, and most are innocent and scared out of their wits of the huge humans. But a few others can bite or sting you and cause real trouble. 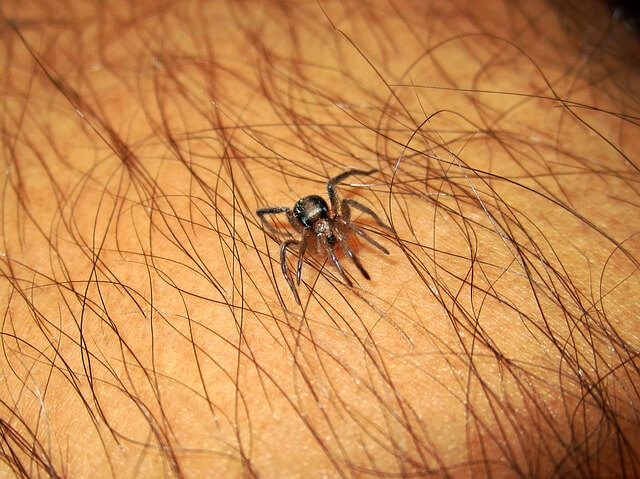 Let’s see which ones you’d rather keep off your party list.

1. Spider
Almost all 40,000 different kinds of spiders are venomous. Don’t panic! Not for people. Human skin is too thick for most of them, and they can’t inject the poison. A spider’s bite usually looks like 2 dots in a circle. But there are 3 kinds of spiders whom you’d better avoid: the Black Widow, the Tarantula and the Brown Recluse.

Their bites can cause intense pain for 1-1. 5 hours. Symptoms also include dizziness and shivering, and it can be hard to breathe. Brown Recluse spiders live in the Midwest and South of the central US regions. They choose houses, barns, and lofts, and can hide behind furniture or floorboards. They have a violin mark on the fore body, but it’s difficult to see it.

The Black Widow lives in the whole territory of the country, usually outdoors in protected places, like heaps of stones or firewood. It has a red or orange hour-glass mark on the belly. Uh uh, YOU turn it over to look!Tarantula’s bites are very rare and – thanks goodness ! – New World tarantulas are not venomous.

But if you try to disturb him on purpose, he can throw out needle hairs, which can cause an allergic reaction. You get it. Don’t mess with tarantulas! If a spider did bite you, don’t do this: – put a tourniquet on the damaged arm or leg- cut the wound by yourself trying to get rid of the poison eat Wash the bite area with soap, put ice on it, and take a painkiller if necessary.

Drink a lot of water. If the bite is on the arm or leg, go to bed and put it down to stop the spreading of the poison. To prevent an allergic reaction, you might need to take an antihistamine. Anyway, if the bite starts swelling or you feel pain, call the doctor immediately.

2. Mosquito
Mosquito bites usually look like swollen red spots about the size of a small berry. They can often be mistaken for a skin allergy. The difference is that they’re usually only found on open areas of the body, where the skin is the thinnest, and blood vessels are closer to the skin. Mosquitos very rarely get under clothes, since it’s dangerous for them.

A brightly colored swollen circle is usually a mosquito bite. It takes its final shape very quickly and doesn’t change for a long time. A lot of red spots after a walk, or in the morning when you wake up, are signs of the insects’ attack. When biting a human, mosquitos inject their saliva, which contains a blood-thinner, into the wound.

This is what causes the swelling, redness and itching. An allergy, however, has different symptoms. A rash spreads all over the body, even under clothes. Rash areas merge with each other and don’t have a particular shape; they can change their look very quickly. Antihistamines help to relieve the symptoms of an allergy.

A runny nose, and itchy and watery eyes are signs of an allergy to mosquito bites too. Mosquitos can also carry infectious diseases. If you get a fever, pain in your joints, and your lymphnodes start swelling after a mosquito bite, call the doctor immediately – it could be an infection.

3. Tick
A body reacts to a tick’s attack with ared spot in the place of a bite. The insect can stay attached to the skin for a long time, sucking blood and increasing in size. You can get a tick from any area of forest or timber, a walk in the park, or even the back yard, if you’ve got uncut grass there. They can also attach to animals, especially dogs, and catch a ride inside your home on them.

The worst thing about ticks is that they can infect people with encephalitis, borreliosis and other diseases. Not all ticks are disease carriers; about 80-90% of them are clean of any viruses or bacteria. But there can be an allergic reaction to the tick’s bite if a person is prone to allergies,has weak health, has been operated on recently, or gets a lot of bites at once.

Related :  What to do if You See a Rat

A tick’s mouth parts allow it to stick to the skin, deep and firm, without causing pain to a human. Ticks are pretty merciful, aren’t they?No. That’s why you might not find it on your body until the next day, or even several days after the bite. Sometimes you don’t notice the tick or the bite altogether.

You’ll face the biggest danger of getting infected if you live in a region endemic in ticks’ infections, or visit it during their highest activity, from the middle of May till the end of September. But one can be attacked during any warm season. Ticks usually stay on high grass and catch on the legs of people or animals.

They choose the grass along paths, since they can smell the people passing by. Sometimes they climb to the bushes and lower branches of trees. Having reached a human body, the tick starts searching for an area with thin skin, which is easier to bite through. That’s why it often sticks to the belly or the small of the back, chest, armpits, neck, ears, and the hairy part of the head.

If you’ve found a tick on your body, remove it with tweezers and go to the doctor, even if you feel ok. Some diseases have a pretty long incubation period, and have no signs at first. You’ll need to take a blood test to make sure that there’s no infection. You can also take the tick itself to a laboratory, where it’ll be tested for infections.

4. Bug
Bug bites look different. Some people don’t notice them at all; others have a strong allergic reaction with itching and pain. A bug bites through the skin, trying to feel for a suitable capillary. That’s why it often leaves a line of 5-7 bites in a row. Sometimes it’s difficult to tell a bug’s bite from an allergic dermatitis.

Bites look like a gathering of micro skin injuries in the same area, usually making up a line. On sensitive skin, the line can turn into a single red swollen spot, and it can be difficult to see the exact places where the skin was pricked. Sometimes there’ll be darker red spots there. Itching is one of the nastiest effects of a bug’s bite.

Related :  Why Mosquitoes Bite Some People More Than Others

The bites can keep itching constantly, and be painful to the touch. Bugs usually attack open areas of body: face, neck, shoulders and arms. Hygene is the bugs’ main enemy. So first of all, you’ll need to wash the bitten spots with soap. At worst, you’ll need an anti-inflammatory medicine or an antihistamine.

5. Bee
A bee can leave a stinger in the spot where it got you. You’ll have to extract it carefully. Bee stings aren’t dangerous if you don’t have an allergy to them. The trauma can look different, depending on the part of body where the sting is. If it’s on a leg, arm or back, the damage will be minor.

The skin gets red and swollen, or a small thick blotch will appear. You’ll feel a stinging pain and burning. Then the spot around the sting gets white, and there’ll be a pins-and -needles sensation around the bite. This happens because of the bees’ poison, apitoxin. 15-20 minutes after the sting, you’ll feel an intense itching.

The spot where the stinger itself punctured looks like a small reddish wound. The swelling lasts from 1 to 20 hours, and reduces with time. It’s quite different if a bee stings you on soft and sensitive parts – face, neck, head, armpits, etc. In that case, there’ll be more intense swelling. Your eye could even swell completely shut.

And it can last from 36 hours to 8 days. The intensity of pain depends on the person’s pain barrier. For people with a high barrier, it won’t be too much discomfort. After you’ve been stung, tend to the wound with hydrogen peroxide and put ice on it. The cold will relieve the pain and reduce the swelling.

Things are much worse if you have an allergy to apitoxin. The bite can lead to Quincke’s disease, and anaphylaxis, which is life threatening. Most people with a severe allergy to bees will carry an emergency treatment with the many time they’re outdoors. Otherwise, call the doctor immediately and take an antihistamine to reduce the symptoms.

Finally if the bee is musical, it’s best to leave it bee. Ha. Otherwise, if you squash a bee natural, he bee flat. So how about you? Did you like my joke? Do you know how to recognize other insect bites? Let me know down in the comments.