How to survive a SHARK attack – Do I still need to tell you what I’ll be talking about today? Yup. SHARKS. They’re the reason you couldn’t get me into any body of water larger than a bathtub until I was a teenager. And even then, the possibility is never far from my mind. So believe me when I tell you, before any trip to the beach, I always take some time to review what I should do if I happen to encounter one.

Admittedly, I’ve been swimming in the ocean for years, and I’ve never actually gotten a glimpse of that terrifying tail fin off in the horizon, but I did get stung by a jellyfish once, and I’m pretty embarrassed to tell you that, at that moment, I may have thought I was about to be chomped. But here’s the thing. Out of the nearly 500 different species of shark that inhabit the oceans today, only a dozen or so have ever been known to go after humans.

And even in those cases, it’s only believed to have happened because the shark was confused or curious. So, despite what movies like Jaws or The Meg have shown us over the years, there aren’t any sharks roaming near the shoreline, looking for people to eat. Sharks are, indeed, opportunists when it comes to their meals, but they tend to prefer smaller fish and invertebrates. 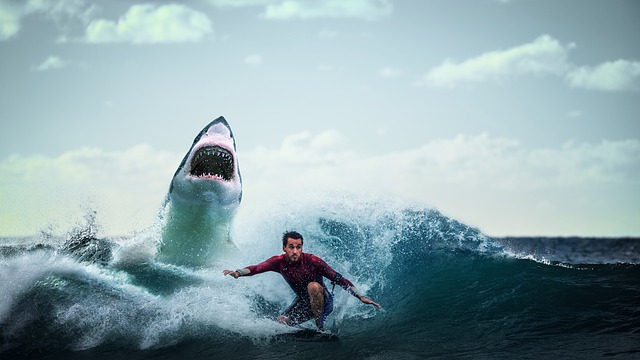 When it comes to us, it’s an old cliché but it rings true – they’re more scared of you than you are of them. Before I go into what to do if you happen upon a shark, here are a few quick tips to decrease those chances.

First, always swim with a group. Sharks are significantly less likely to go after a group than a solitary person. But, if the shark goes after the group, have confidence that you don’t have to be the fastest swimmer, just faster than the other guy.

Related :  How to Prevent and Protect Car From Theft

Yes, I’m kidding. Second, avoid the water at dawn, dusk, or night. Unless the water is in your swimming pool, then you’re fine. But seriously, sharks are most active during these times and are more likely to spot you before you spot them. Avoid wearing shiny jewelry. This can have the unintended effect of making you into a human fishing lure. If you’re bleeding at all, it’s best to stay out of the ocean altogether.

Sharks can smell blood from at least 500 yards away, if not more, and can easily track its source. Finally, avoid areas that are being heavily fished – by people or birds. The fish that people or seagulls are looking for is the same kind that sharks like to look for too. Still, anything is possible when you’re out in the deep blue sea, so if you do see a shark, here’s the plan. You’ve probably heard this before, but it’s so important that I’m going to tell you again right now.

If you see a shark while you’re in the ocean – Don’t. Freak. Out. Keeping your cool is good advice in any stressful situation, and while it’s always easier said than done. With our calm and clear heads, it’s time to assess the situation. If it’s possible to calmly get yourself out of the water, do that. Until sharks learn to walk and breathe air, the best place to avoid a shark is obviously to get to where they can’t go.

And to be redundant and repetitive – you want to make your escape as calmly as possible. If you start splashing around like crazy, you’re only going to draw the attention of the big fish, and that’s the opposite of what you want to do. Of course, sharks are more likely to be around the deeper and more open parts of the water, so a simple and quiet trip back to the shore isn’t a likely option.

Related :  18 Best Things To Do In Your Free Time

This makes not drawing attention to yourself even more important. Avoid sudden movements. That said, if there are people around, it’s a good idea to let them know what’s happening, so they can help, let them freak out and distract the shark for you. Just kidding. Sort of. You’ll probably want to scream, but don’t do that either. Still, if others are close enough, speak loudly enough for them to hear so they can help.

Try to keep the shark in front of you. Sharks are known as “ambush predators”, meaning they prefer to get to their prey by surprise. If it knows you’re aware of it, it’s more likely to be aware of you, and as I already said, you aren’t a favorite on the shark’s menu. If the shark does manage to get close to you, make and maintain eye contact.

And if that sounds terrifying – don’t worry – there’s a good chance if you stare into each other’s eyes long enough, maybe you’ll fall in love! Yes, I’m joking, but this can also help the shark to recognize you as something other than lunch. If it recognizes you’re a person, it’s likely going to react the way I do to brussels sprouts at a buffet and move right along to something else.

As it’s swimming by, you may want to curl up into a ball so that you seem peaceful and won’t be confused for something it does want to eat, like a seal. If you can’t get away, and the shark begins to circle or zig-zag around you, it’s time to go into survival mode. In this instance, try to make yourself appear as large as possible. Hopefully, this will make it think twice before coming for you and move along.

Related :  How To Fall Asleep Fast

You may consider “playing possum”, but this is a terrible idea and makes you more vulnerable if things turn aggressive. And if they do, you need to be willing to fight for your life. You may have heard that socking a shark in the nose is the way to go, and if that’s your only option, it’s better than nothing. Still, consider that right under a shark nose is a shark mouth and that’s not where you want to be.

If you happen to have a camera or snorkel, consider using this to go after the eyes or the gills. Fists will work if you don’t have anything else, and with any luck, aiming for these sensitive areas will be enough to startle the shark and scare it off long enough for you to make your escape. It’s important to remember what I touched on at the start.

Shark’s just aren’t that into you. Even if you swim in the ocean regularly, statistically speaking, you have a better chance of an aggressive interaction with a cow or a horse than you do with a shark. Admittedly those numbers get higher if you’re a deep-sea diver by profession, but if you are, I’m not telling you anything you don’t know. The fact is, sharks are a vital part of the ocean’s food chain.

Without them, that chain would fall apart, and who knows what would happen to our ocean’s ecosystem. Many species, like the hammerhead, are critically endangered, so if you do come across one, stay cool and only defend yourself if necessary. Chances are, you’re going to be just fine while it swims away, and you’ll have an amazing story to tell for a long long time.