Jail vs Prison – What’s The Difference? – You did the crime, and now you’re gonna do the time. You’re shipping up to the big house, to the clink, to lockup city. But you could actually end up in two completely separate places, both with different sets of rules. Today we’re asking: jail vs prison- what’s the difference?

First we’ll start with jail, since if you were forced to choose this is definitely the one you want to get sent to. Typically this is what’s known as the clink, with prison being known as the big house. Jails are normally much smaller facilities that hold a smaller number of inmates than prisons, which can have populations of several thousand.

They’re typically run by local governments- think city versus the state- and supervised by a county Sheriff’s department. Their population is mostly made up of people who have recently been arrested for minor offenses or a misdemeanor, and their sentences are far shorter than in a prison- typically less than a year. 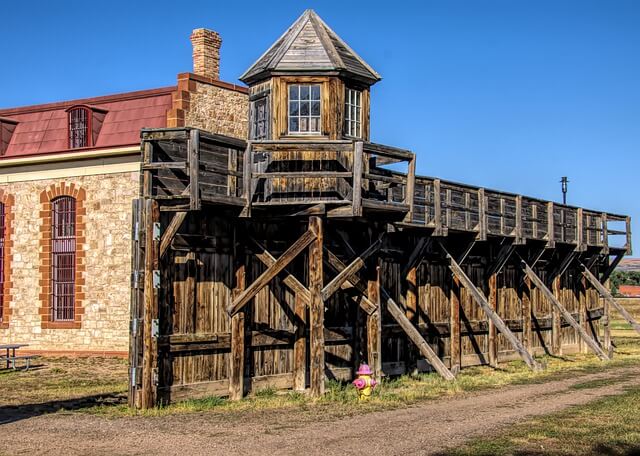 Yet jails are themselves different from temporary lockups which are typically located inside police departments and hold individuals who can’t post bail, those arrested for public drunkenness, or individuals waiting to be processed into a jail. Jails can also serve to hold prisoners awaiting trial or to hold a prisoner during a very long and extended trial.

While they typically only hold individuals guilty of misdemeanors, if the sentences for several misdemeanors are not served concurrently then an individual could be held for far longer than the typical period of less than a year. However jails often offer work release programs, boot camps, educational programs, substance abuse support groups, and vocational training programs.

Prisons however are a vastly different world than jails, and this is where the most hardened criminals are sent to. You’ll find no misdemeanors here, and instead prisons hold men who have been convicted of felonies. If you’re wondering the difference between felonies and misdemeanors, misdemeanors include such offenses as petty theft, prostitution, simple assault, trespassing, vandalism, and reckless driving.

Advertisement
Related :  Crazy Ways People Have Tried to Use Radiation

Felonies on the other hand include crimes such as assault with a deadly weapon, grand theft, rape, and murder. If you had to pick which of the two populations to spend a year or more with, we’re pretty sure you’d want to go with the misdemeanor crowd. While jails are run by local governments, prisons are run by the state or even the federal government, who has its own prison system apart from that of state government-run prisons.

The difference between the two types of prisons is pretty obvious- state prisons hold individuals who break state laws, and federal prisons hold individuals guilty of breaking federal laws. The difference between the two offenses can be a bit murky though, and federal prisoners can range from individuals who rob banks- because banks are insured by the federal government-to people accused of political crimes, and many white-collar criminals.

For these reasons state prisons are often much more dangerous than federal prisons,as they hold many more violent offenders. If you plan on breaking the law then make sure it’s a federal law and not a state law for a much safer prison experience. Both federal and state prisons range from minimum security to maximum security though, and the degree of the offense determines where you’ll end up. Many white collar crimes such as tax evasion can net you a stay in a federal minimum security prison.

Here you’ll enjoy many amenities including team sports and a dining facility, with few guards and typically just a single fence. Minimum security prisons tend to resemble adult camps more than actual prisons, and some even have internet access for their prisoners. Visits with family are common, and violence is exceptionally rare.

Related :  Why Cruise Ships Are White

You’ll also be able to enjoy a dorm instead of a cell, and over all your stay will resemble something more like a college dorm than an actual prison. Offenders here typically have non-violent convictions and clean prior criminal records,though some can be prisoners who have been transferred form higher security prisons thanks to exemplary behavior.

Medium security prisons are what you probably think of when you think of prison, and though the inmates do enjoy some degree of independence their movements are all very tightly controlled. You can forget things such as team sports and internet access- though some prisons may offer use of library computers as incentives to well-behaved individuals.

These places are inhabited by inmates with very violent offenses or those who have caused trouble in lower security prisons, earning them a trip to a much more restrictive life. Inmates who have tried to escape, or successfully escaped and then been caught, are also automatically sent to a maximum security prison so their movements can be very closely monitored.

Unsurprisingly an inmate’s daily life is extremely restricted in a supermax, and head counts are common. Prisoners typically share a small cell with another prisoner and may get some freedom to move about cells during the day time, but must always be ready for headcounts by lights out. Prisoners also enjoy cafeteria meals and time spent on recreation out on the yard where they can do things like play basketball or lift weights.

While gang activity permeates the entire prison system, and even jails, it’s in maximum security prison where it is at its peak, and along with the restrictions imposed by the prison system, inmates live under a code of conduct further restricted by the gangs they join. Not joining a gang is possible, but typically hazardous to your health.

Inside a maximum security prison you can also find solitary lockup, which is where the worst of the worst end up doing much of their time. Here offenders who trespass while serving time in prison will get sent as a punishment,and though most stays last only a few weeks, they can end up serving as much as years in solitary.

Offenses such as assaulting a guard will not only get you more prison time, but earn you several months or more in solitary, where you’ll spend your entire day cramped up in a tiny cell with one hour of outside recreation a day. During that hour you’ll be allowed to sit in a small fenced-in outdoor area that’s typically a few paces long by a few paces wide, though often you may not be allowed outside as short staffed prisons simply can’t spare the manpower to get you your hour of rec.

Other times guards may simply deny you your hour as a punishment measure. Between the two you definitely want to serve your time in jail if you can, or at least in a minimum security prison where you’ll enjoy many of the perks of what basically amounts to an adult camp. End up in a medium or maximum security prison though and not only are you going to be there a long time, but your stay is going to be much more difficult and much more uncomfortable. Which would you rather serve your time in? Let us know in the comments.