Mysterious New Stonehenge Shocks Scientists – The face of the earth has changed dramatically over time, and most people know that once the whole world was one single super continent- pangea. Yet what might surprise you is just how much the earth has changed in the time that humanity has been around, a relative blink of the eye in geologic time scales.

While that’s not enough time for massive continental shifts, it is more than enough time for weather and natural events to dramatically change territory that today seems familiar, but a hundred thousand years ago may have been completely alien to you. Humans too though are capable of dramatically changing our environment, and many coastlines today look nothing like they did before humans starting expanding landmasses through dredging.

The same goes for many of the world’s lakes and rivers, with some rivers having been completely re-routed from the routes they once flowed for millions of years! Many lakes and reservoirs now dot the landscape that would not exist naturally, and in Spain,one such reservoir has kept a long-hidden secret safely sunken away from prying eyes under dozens of feet of water.

Yet mankind is also changing the environment in another way- global warming. With temperatures rising, water levels in many natural and unnatural lakes and even rivers have begun plummeting, while global oceans rise. After years of record-setting high temperatures in Europe, Spain has suffered a severe drought which has ravaged the nation economically- but recently, it has also revealed a stunning archaeological secret hidden for over fifty years. 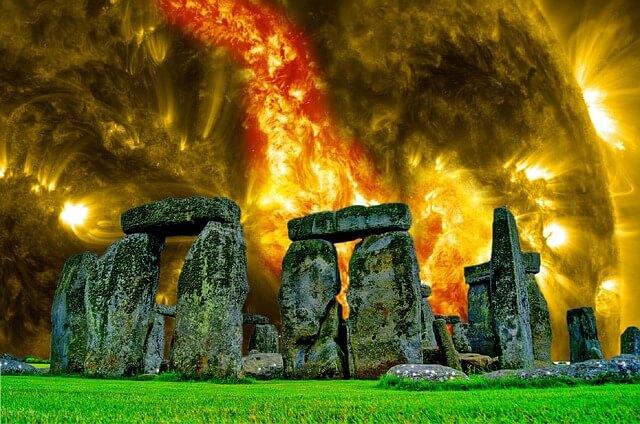 Spain’s interior is no stranger to droughts, and much of its heartland is made up of very arid territory. In order to help farmers provide water for their crops and expand farm able land into the interior of the nation, the Valdecanas Reservoir was built in 1963. The quickly growing reservoir of water however soon swallowed up an archaeological site known as the Dolmen de Guadalperal- or “treasure of Guadalperal”.

Internationally it was known as the Spanish Stonehenge, and it was discovered by German archaeologist Hugo Obermaier, though at the time of its discovery it received very little fanfare. It wasn’t until the reservoir covered the site that Obermaier’s study of the site was actually published. And thus the ancient monument lay forgotten, with only the very tops of the tallest stones poking above the water line when water levels fluctuated.

That all changed however as global warming intensified the effects of drought, and now the monument lies entirely bare, allowing archaeologists to study it once more. A circular monument made up of 150 large granite stones known as orthostats, the resemblance to Stonehenge is rather uncanny. Unlike Stonehenge though, many scientists believe that this formation once was enclosed with a roof.

The main part of the monument is an ovoid chamber five meters in diameter, with an access corridor that’s 21 meters long and 1. 4 meters wide. At the entrance to the main chamber stands an elaborate stone two meters high that is adorned with a snake carved on it and several cups, where it’s assumed that ritualistic fluids would have been poured or held in reserve.

Related :  19 Surprising Things Pilots Do Onboard

Around the entire structure stood another circular ring of stones, with the inner part of the monument buried under dirt and gravel. Scientists believe that the site could have been a solar temple, dedicated to the worship of a sun god type figure. It was also likely used as a burial chamber, perhaps for figures considered noble or important to the tribal society that built the site.

Modern archaeologists also discovered plenty of evidence however that they were not the first archaeologists to visit the site, with the discovery of many Roman implements indicating that their Roman predecessors had also excavated the monument. The roman excavators however may have been more looters and less archaeologists, as scientists found 11 axes, various ceramics, flint knives, and a copper punch in a nearby Roman trash heap- clearly discarded for not being valuable.

Sadly all the years spent submerged have not been kind to the site, and the water has severely eroded many of the stones. Runes and other engravings on the stones themselves are all but illegible now, only deepening the mystery of who built this structure and why. Luckily German archaeologist Hugo Obermaier and his team had made reproductions of some of the engravings, and today a Spanish archaeological society has requested the reproductions for study.

The future of Spanish Stonehenge however is up in the air, as it’s expected that the site will eventually flood again as the drought recedes. Many spanish archaeologists have requested for the site to be protected, though that would likely require it be physically moved from its current location and placed on higher ground- something that’s unlikely to happen.

Related :  These Are the Most Expensive Things in the World

If the effects of global warming are not addressed, then the reservoir will likely remain so low that archaeologists will not have to worry about the monument being lost forever under the waves. Who do you think built the Spanish Stonehenge? Should this site and others threatened by climate change be moved for their protection?Let us know in the comments.