That’s Why Airplane Windows Are Round – If you’re a regular here on the HENRIRE.COM, you’ve probably noticed that I love planes. Love ‘em. I used to love to jump out of ‘em. All the time. But that’s another story. Still some things about airplanes still seem outright confusing to me, like why on Earth are airplane windows round instead of square like the ones on your house? And why do the shades have to be up when planes take off and land? Alright, it’s high time for some answers….

So, about those corner less windows. Although it’s been around since the 1920s, commercial air travel didn’t really takeoff until the ‘50s. That’s when airplanes started to fly at higher altitudes. It saved airlines tons of money because up there, the air is significantly less dense and aircraft use less fuel.

The only drawback of this new development? The plane cabin had to be pressurized – otherwise, passengers wouldn’t be able to breathe at a height of 30,000 ft.  and they’d all pass out and miss the in flight entertainment,which back then was two jugglers and a vaudeville comedian. Well maybe not that last part. 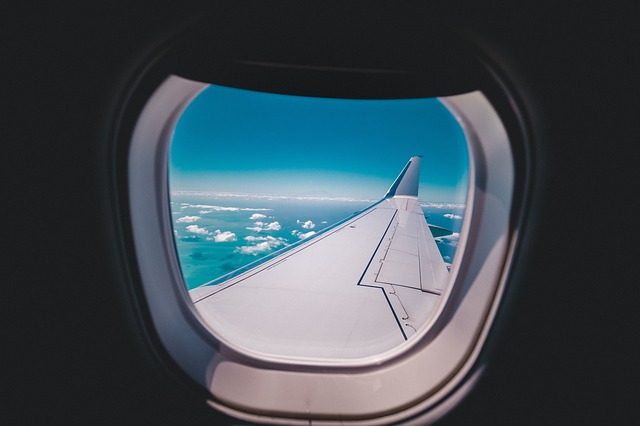 The early, box-shaped planes couldn’t handle that kind of pressure, so engineers presented a new cylinder-shaped cabin. But even after this upgrade, aircraft still had standard square windows, and that turned out to be a grave mistake. Several airplanes were torn apart right in the air because of it! You see, the pressure builds up exactly in the corners, making them ultimate weak spots.

If each square window has 4 vulnerable spots, it’s likely to shatter under the enormous stress that comes from keeping the cabin pressurized for passengers at high altitudes. Luckily, making airplane windows curved solved this problem once and for all. Such a shape distributes the pressure and reduces the likelihood of cracks or any other damage.

So, you get to breathe easy up there AND look out the window without having to worry about it giving way under the pressure!– Ok, sounds good. But what about the shades? Why am I always told to keep my window shade up when the plane is taking off or landing? The sun is blazing in my eyes; I’m just trying to sleep here! Turns out, there are some serious safety reasons behind this too.

Related :  Why No One Should Swap Seats on a Plane

When the shades are closed, flight attendants can’t see what’s happening outside. And since most accidents happen during take-off and landing,  it’s crucial that the cabin crew have a good view of what’s going on outside the aircraft. Then, in case something goes terribly wrong, they can react fast and evacuate passengers. Besides, opening the shades allows passengers’ eyes to adjust.

So if they have to get off the airplane in a hurry, they won’t feel: blinded by light. Revved up like a deuce, another runner in the night. Remind to explain those lyrics later, okay. — Fine, I accept the fact that the shades have to be open at particular times during the flight, even when I’m grumpy and trying to get some shut-eye.

But must these windows be so low? Why do I have to slouch when I’m trying to admire the incredible view out my window? Surprise surprise: that’s also for safety reasons…By placing windows that low, airplane manufacturers distribute the pressure around them more evenly. Check it out: the floor of the passenger cabin isn’t actually the bottom of the plane.

If the windows were located any higher, they’d be closer to the top of the jet. That, in turn, would seriously mess with that oh-so important pressure distribution you just learned about. Therefore, aircraft windows are located closer to the mid line of the fuselage, even thought hey’re pretty low relative to the overall passenger-cabin height.

Got it, but how about the size of the windows? Kinda make you feel like a giant, don’t they? Why are they so small? Do you have any guesses? Yeah, let’s just get into the safety stuff…Big windows can weaken the plane’s fuselage. If it’s not as strong and gives under the pressure, the aircraft gets ripped apart. Not a good thing. Small windows prevent that since the air frame remains sturdy.

However, there is another reason for making aircraft windows bite-sized. Well if you got big jaws. Let’s say, the unthinkable happens, and one of the windows gets blown out at the cruising altitude of 35,000 ft. Any person sitting next to this window would immediately be sucked out of the aircraft,and the lives of other passengers would be in grave danger.

With a gaping hole in this little bubble of breathable air, depressurization of the cabin would ensue. Even with oxygen masks, passengers wouldn’t last long in such conditions. That’s why the pilots would have to bring the plane down to at least 10,000 ft. That’d be enough for everyone to breathe normally. All of that would be with these itty-bitty windows.

If they were bigger, that cabin pressure would escape faster. As a result, the air would become unbearable before the aircraft managed to reach a safe altitude. — Then why are the windows in the cockpit so big?? In this case, we have to deal with priorities. Pilots need to be able to see what’s happening around them and where they’re going.

That’s why plane manufacturers spend a fortune on huge window panes designed with the perfect shape, material, and thickness. So despite being panoramic, cockpit windshields can withstand incredible pressure differences,unlucky bird accidents, and other strains of flying. — Until recently, it never occurred to me that literally all commercial airliners have doors on the left side.

There are several reasons for that. First of all, the captain typically sits on the left. If the door is on his side, it’s easier for him to align the plane with the terminal jet bridge. Also, pilots need to be able to judge the distance between the wing and the terminal building so that they can park right in front of the terminal doors.

Finally, while the ground crew fuels the aircraft on the right side, passengers boarding on the left don’t prevent them from doing their work. The same goes for baggage loading and unloading. Another question connected with the door son jumbo jets is, “Why do they always open inward? “Here’s a hint: it’s called a “plug” door.

That means the door seals itself thanks to the pressure difference on its two sides. As you know by now, the pressure inside the plane is much higher than it is outside. This pressure literally forces the door in its socket and prevents it from opening until the pressure becomes equal. In other words, instead of relying on the door’s lock, with plug doors, you take advantage of Boyle’s Law, which explains how pressure and gases are related.

That’s why it’s impossible for a person to open a pressurized airplane door mid-flight. Each square inch of this door feels the pressure of 6 lb of weight. So to open it, you’d have to pull with the force of a thousand pounds. No human is powerful enough to perform such a feat of strength. Well, maybe the Hulk…The only way to do it is to ask the pilot to depressurize the cabin.

But why would you wanna go and do a thing like that?– I also recently found out that backward seating on a plane is much safer than the usual one. It’s because rear-facing seats provide more support for your neck, head, and back. But then, why don’t airlines replace the existing seats with their safer alternative? First of all, it’s all about psychology and tradition.

You’d probably feel nothing short of confused if you entered a passenger cabin and saw all the seats facing the “wrong” way, don’t you think?But the main reason for leaving things as they are is the huge costs this renovation would involve. With a backward seat placement, the passenger’s center of gravity would be higher. This would take its toll on the seats.

With more strain, they’d have to be strengthened, along with the fittings and the cabin floor. In the end, the aircraft’s weight would increase, it’d consume more fuel, and airlines would have to spend a lot more money – and probably slide their hand deeper into your wallet. Rear-facing seats do exist on some airplanes, but you have to pay more to book this kind.

For example, premium cabins on British Airways, Etihad, or American Airlines have the option of backward seating, and some people pick such seats for the additional privacy they provide. And if you’re worried about getting motion sickness from sitting backwards during a flight, no need to stress! You can barely feel the difference since it’s nothing like traveling in a rear-facing seaton a bus or train!

What other questions about airplanes would you like answers to? Leave them down in the comments.