The Only Way to Escape a Swarm of Bees – Just the sound of that buzz can put anyone on edge…getting stung by a bee is the worst, if you don’t count shark bites and some other things! How can something so tiny inflict so much pain? And, with somewhat of a bee army back at its hive…can you imagine being attacked by a whole swarm of them? You’re about to find out! As “Save the Bees” projects have popped up everywhere, honeybees are necessary to our environment, after all, many people have turned into amateur beekeepers; so swarms are definitely a concern. 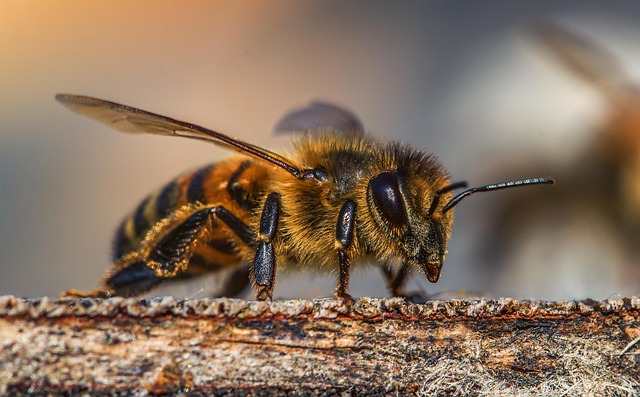 The thing is, bees are pretty sophisticated when it comes to communication and their complex societies, they’re the geniuses of the insect world! They can send “help” signals to a swarm with their pheromones, which can travel a surprising distances. But don’t panic! There are things you can do if you see a swarm and fear being attacked, and there are also things you shouldn’t do. We’ll start with the DOs :

1. Know when it’s prime-time for swarms
Just so you can be on the alert: honeybees breed in the springtime. This results in overcrowded hives, and a new queen bee may appear to rule over her new brood. The old queen’s loyal subjects will try to move her out of the crowded hive, and find a new place to live. This is the cause of the large numbers of bees you may see around this time. But remember – they’ll be full of honey and super focused on their mission, so they aren’t concerned about you.

2. Be able to recognize what kind of bee you’re dealing with
When you first spot a swarm, don’t panic. Some honeybees are more territorial than others. The Africanized Honeybee is particularly territorial, and will defend its hive with its life. Africanized honeybees are smaller than other honeybees, and its sting is less venomous,but the numbers and tenacity with which they’ll attack in order to defend their hive is what makes them scary.

If you can identify a more aggressive type of bee, you’ll have the chance to be extra cautious around them. 3. If a swarm starts to chase you – RUN! Run away from the swarm in a straight line until the bees stop chasing you. You can outrun a swarm – just run as fast as you can. Running in a straight line is important because the swarm stretches wider than the width of your body, so zig-zagging won’t really help. Going straight will cover more ground anyway. Have you ever been chased by a swarm of bees?? Tell me about it in the comments!

Related :  What to Do When You See a Spider

4. Cover your head and face
Whether you have a blanket with you from a picnic, a hood, or even your own shirt, use whatever you can to protect your face; especially your eyes. If you’re using a blanket or sheet, make sure you can still see where you’re going. If you don’t have anything, at least cover your face with your hands, make sure you can see, and keep running. The bees will try to attack your face and head first, so protecting it is essential.

5. Seek shelter ASAP!
A shelter with a door you can close is ideal – your house, your car, even a public rest room with a door if you’re at a campsite or nature preserve. Even if a few bees squeeze in with you, a blockade like a door will stop a whole swarm. Two or three bees arec easier to deal with than thousands!6. Lights Out! Hopefully you made it to some kind of building or room with a door so that you can turn the lights off. Turn off every light so that the only light source is from the windows. Any bees that have managed to follow you inside will be attracted to the natural light, and will hopefully leave you alone. After making absolutely sure that the swarm isn’t close to where you’ve taken refuge,open a couple windows to let the stragglers out. Just “bee” careful!

7. If you do get stung…
Scrape the surface of the sting with a credit card or something similar. You’ll want to remove the stingers as soon as possible, so the venom won’t continue to spread. Using this credit card method will do the job and prevent the stinger from being further embedded into your skin. An anti-itch or other soothing cream may help too. Obviously, take action if you’re allergic to bee stings; or go straight to the doctor if you start to have a particularly bad reaction, allergic or not.

8. Light colored clothing
The honeybees’ natural enemies are dark-colored animals, like badgers and bears (and bears love nothing more than honey!). Honeybees have evolved to detect dark colors, so light-colored clothing won’t appear as threatening to them. Pro tip: red looks just like black to honeybees, so avoid this color too.

9. If you ARE wearing dark clothing, it can be a defense
If you’re getting attacked and you do happen to be wearing a dark-colored sweatshirt or jacket, take it off and start flailing it around. This will trick the bees, and they’ll register your dark sweatshirt as a bigger enemy animal,causing them to back off. It might sound silly, but it works!

10. Know how to spot a potential hive site
Any hidey holes or cracks should be filled around your home and in any outbuildings on your property. The eaves of your home, barns, sheds, or rotten lumber are all hot spots for hives. Honeybees love to build their hives in high, covered places, so pay attention to your trees too. Watch any carports or garages. Honeybees will use any corner or crevice to start a hive, and before you know it, you’ve got a big problem.

11. Pay attention!
No, the bee isn’t blind. If you notice a bee or multiple bees aggressively bumping into you, a swarm and an attack mightbe on the way. You’ve unknowingly posed a threat to the bees, and might be near a nest that you didn’t notice. If this happens, just remember: don’t swat, and run away from the vicinity as fast as you can.

You wouldn’t have to tell me twice!…And here are some DON’Ts:

1. Don’t swat at a bee
I know I just mentioned the dark shirt method,but that’s kind of a different concept; that’s to trick the bees. Swatting at a bee with a newspaper, magazine, or flyswatter will cause the bee and the wholes warm to attack more aggressively. The bee you’re swatting at will send out those “help me!”signals and its friends will answer the call! It may be tempting, and it’ll probably be your first instinct, but trust me: it’ll only make the situation worse.

Related :  Most Venomous Animal In The World

2. Don’t jump into any water!
Again, it may seem instinctive, but that water won’t stop those bees! Even though they can’t sting you in the water, they’ll just wait for you to get out or come up for air. They’ll swarm around the pool or lake you jumped into, planning their strategy…and then they’ll just continue to chase you!So resist the urge to seek out water – it’s only a temporary fix.

3. Don’t leave any sweet stuff outside
Bees love sweet stuff – from the flower nectar they look for, to your open can of soda. Anything sweet attracts bees in general, so don’t leave any open soda cans, popsiclesticks, or ripe fruit lying around outside. I mean, you definitely don’t want to accidentally drink that bee that’s nestled at the bottom of your Coke can. Yeah I’ve done that.

4. Don’t wear perfumes or scented lotions outside
Avoid lots of hairspray too guys. The sweet or flowery scent of these products will be irresistible to any bee. Remember that it’s their job to pollinate flowers; if you smell like one, they’re going to head your way! 5. Don’t try to get rid of a hive on your own! If you notice a hive near where you live, don’t call the A Team, call a bee professional.

They’ll come to your home and get the nest out of there in a way that’s safe for you and the bees. They’ll most likely take the hive to a professional beekeeper, so that it can continue to thrive. Don’t try to get rid of it or remove the hive yourself; you’ll most likely come away with a few stings, or worse. You may also accidentally harm the hive. Calling in a professional is really best for all parties involved. And remember B a-lert; the world needs more lerts.