The Only Way to Survive an Alligator Attack – Hi! Unless “Jurassic Park” turns out to be real, you wouldn’t expect to stumble across any dinosaurs in your daily life. However, depending on where you live, that might not be precisely true. On the surface, modern alligators might not seem as impressive as the giants they once walked among. That doesn’t mean these guys aren’t any less dangerous.

In Florida alone, seven to ten people fall prey to alligator attacks every year. About six percent of these attacks prove fatal. That begs the question of what to do if a gator starts to think you look tasty. Hey, do you remember “Wally Gator” the cartoon show in the ‘60’s? That just popped into my head. He wore a collar and a pork pie hat, lived at the zoo and was always trying to escape.

I don’t think he attacked anyone. Probably so not to scare the kiddies, or the advertisers. Anyway, if you encounter a gator (Wally or not) on dry land, the first step is to run. Probably don’t need a reminder on that. One standard piece of advice is to run zig-zags to keep the beast from reaching full speed,but some experts say that isn’t necessary. 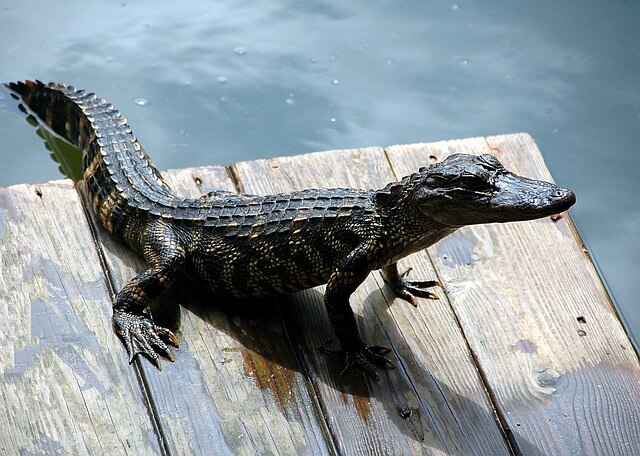 Alligators are surprisingly fast, capable of breaking twenty-five miles per hour ina sprint, but don’t have very much in the way of endurance. Even if it looks like one is gaining on you, they’ll usually get tired and give up quickly. That’s assuming it even bothers to chase you down in the first place. Alligators are ambush predators that prefer surprise attacks from underwater to lengthy overland chases.

They’re most dangerous in the water, and are much more effective at drowning their prey than taking them down with tooth and claw. Prey fleeing over land will be hard for them to catch and difficult to overcome, so most don’t even bother. Anything an alligator doesn’t catch in the first lunge is probably a lost cause. At that point, most gators will slink off back to their hiding spot and wait for something else to come along.

Really, they’re a good deal lazier than they are intimidating. But what if one manages to catch you by surprise. Let’s say you’re fishing on the edge of a lake and don’t realize that drifting logis six hundred pounds of scales and teeth. An American alligator can slam its jaws shut with almost three thousand pounds of force,triple that of a lion or tiger.

The best way to deal with an alligator is to run, but that isn’t an option once one has clamped itself to your leg. At this point, your only option is to fight back with all your strength. Attacks like this are very rare, but those who fall prey to them can be seriously injured,or even lose their life. Your one advantage is that you want to live more than the gator wants to eat you.

The more you struggle and the harder you resist, the less appetizing you become. Become enough of a hassle, and the alligator will decide you aren’t worth the effort. You might be tempted to try pulling open the gator’s mouth, but experts agree that’s exactly the wrong thing to do. You might have seen pictures or videos of people holding an alligator’s mouth closed with their bare hands.

That’s due mainly to a quirk in gator anatomy where they have fewer muscles dedicated to opening their mouth than closing it. While I’m sure we all know at least one person we wish had that exact problem, it isn’t very helpful against an alligator gnawing on your shin. Fortunately, nature’s boss fight isn’t impossible, since alligators come with a few weak spots you can hit for massive damage.

The biggest one is the gator’s snout. Nobody likes getting kicked in the nose, and alligators are no exception. Another option is to try jamming something up its nose. A stick will usually due, as will pretty much anything narrow enough to fit through the animal’s nostril. While it’s not a guarantee, forcible nose-picking isn’t exactly what most alligators consider a good time.

Speaking of water, which is, I guess, what we’re going to do now, if you happen to be in some when you pry that nostril open, the gator will have to choose between letting you go and potentially drowning. For a creature that’s only somewhat interested in eating you to begin with, it’s not a difficult choice. If you can’t get at the gators nose, poking it in the eye is a solid choice for plan B.

Related :  Most Venomous Animal In The World

Decades of research have determined that being poked in the eye isn’t pleasant. This applies to alligators as well. While gators have a set of transparent secondary eyelids, the eyes are still more vulnerable than almost any other part of their armored body. A third option is to attack what’s known as the palatal valve. This is a fleshy organ at the back of their tongue.

The purpose of this flap is to keep water from getting in the alligator’s lungs. You can see why forcing it open might be detrimental to the gator’s health. Even if you can’t manage that, a series of repeated kicks might be enough to open the gator’s jaws. Nobody wants their foot in an alligator’s mouth, but getting it out is all about playing the cards you’ve been dealt.

All things considered, there are worse places to be than within striking distance of the back of its throat. Regardless of which angle of attack you choose to employ, you need to be prepared to counter the alligator’s signature weapon: rolling. Once an alligator gets a hold of you it will start to roll, and you must roll with it.

If you don’t, some nasty things are going to happen to whatever body part is in their mouths — the kind of things that usually happen to a rotisserie chicken. When the animal starts to roll, your only option is to roll in the same direction. If that proves difficult, you can try holding onto the alligator’s body or snout.

Hugging a hungry dinosaur might not sound like a good idea, but it gives you a good chance of walking away with the correct number of extremities. Rolling is exhausting, so the alligator will need to rest for a few seconds after the maneuver. It’s not much, but during that brief window, you’ll have the upper hand. Counterattack with the same strategies I already told you about, and you have a pretty good chance of getting free.

After that, it’s time to run. Winning against an alligator means staying alive. If round one was a draw, there’s no benefit in sticking around for part two. See you later alligator! You know, I’ve been waiting six minutes to say that…Once you’ve gotten away, you’ll want to find medical attention ASAP. That three thousand pounds of force I mentioned isn’t doing any favor to your bones and muscles and let’s not forget those pointy yellow teeth.

Related :  Most Venomous Spiders In The World

In addition to some pretty severe wounds and fractures, many who fall prey to a gator suffer bacterial infections thanks to all the nastiness living in the animal’s mouth. Treating these infections is a lengthy, and often unpleasant process, but it sure is better than the alternative. Fortunately for both species, alligator attacks are very rare. As long as you give them enough space, most will prefer to live and let live.

Of the eight crocodile-like species known to attack humans, alligators are among the least aggressive. “Wait!” you might be saying if you’re a glass-half-empty kind of person. “Doesn’t that mean there are seven other animals that are worse?” On that front, I have some good news and some bad news. Most Crocodilians, as they’re called, have the same weaknesses and use very similar tactics.

Specific behaviors will vary from species, but the strategies I described should be effective against all of them. Whether it’s a croc or a caiman, the rules remain basically the same. The bad news is that crocodiles can grow much bigger than their American cousins, and are drastically more aggressive. While alligators and caimans seldom target humans for food, many species of crocodile very much do.

Responsible for more than one thousand fatalities every year, crocodiles are the tenth deadliest animals to humans. If you exclude other people or anything that slays with venom or by spreading disease,Crocodiles jump straight to number one. As Elton John might say, “Crocodile’s Rock!” So always remember, wherever you see a big scaly remnant of the dinosaurs, keep your distance.

Some species only want to be left alone, and a few want a lot more than that. We might be the top of the food chain now, but we weren’t always. When you think about it, we haven’t been the top predator for all that long, and it seems not everyone’s gotten the memo. What about you? Have you ever been too close to a gator? Can you think of any reptile survival techniques that I missed? Let me know down there in the comments.