What Each Noise You Hear on a Plane Means – So… you’ve just taken your seat on board your airliner, and your palms are sweaty, your heart is racing, and you just can’t shake your anxiety. That’s okay – a ton of people are nervous flyers! You’ll probably be paying extra close attention to every sensation and sound during your flight. Stay with me: there are lots of sounds that are completely normal on an airplane! First, let’s start with a little countdown to lift-off : 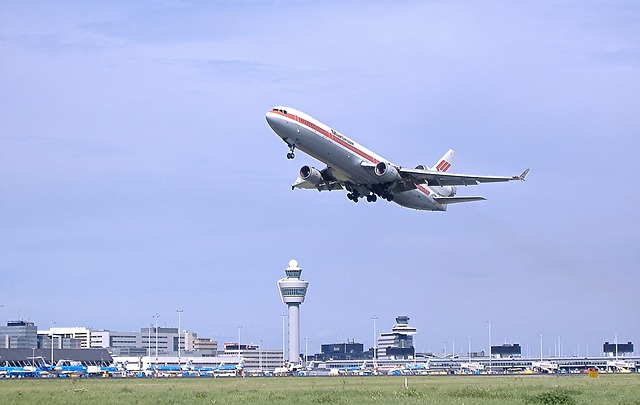 The first sound you’ll probably hear will be two dings.
About 20 minutes before you take off, you’ll hear two high-pitched dings in a row over the intercom system. This only means that one crew member wants to talk to another, just to get into preparation mode for the flight. This is your chance to sit back, make sure you’re buckled in, and try to relax. If you think about it, these dings are a good thing – they mean that the intercom system is working and that there’s functional communication between crew members!

15 minutes before your plane takes off, you’ll hear a single ding.
This is a call from the cockpit to the flight attendants to pick up the phone. 15 minutes before take-off is pretty much the pilot’s last opportunity to do anything he needs to before he gets your plane in the air: like going to the bathroom, grabbing some coffee, or getting a snack. The single ding is like his request to the flight attendants to grab him that coffee or snack, or letting them know that he’s stepping out of the cockpit for a minute. You want your pilot to be comfortable, right??

10 minutes before take-off: you’ll hear a soft pound from under the plane, and a drill-like sound.
This is just the crew closing and securing the cargo hold. When you land, you want all of the fun stuff you packed to be there too, right?? The engines are now revving up, too. If the crew didn’t close the cargo hold, you might see your PJs or swim trunks flying away! Just kidding…but, you know, there can’t be doors hanging open while you’re in the air.

Related :  Why Airplanes Don't Have Parachutes

It’ll pick up speed once it’s on the runway so that it can achieve enough lift to get into the air. It’ll sound like it’s windy, but this is just the sound of the plane’s wings and propellers engines slicing through the air. Lift-off is pretty cool to watch if you have a window seat – but if it makes you nervous,just sit back and close your eyes until you’re in the air.

Lift-off!
Love it or hate it, there’s nothing quite like feeling your plane leave the ground! You’ll hear the sound of the plane’s wheels going back up into its belly. You’ll hear the sounds of engines working and mechanical things happening, and it maybe a little overwhelming and very loud, but these noises are completely normal.

Remember that your plane is an amazing and complex piece of machinery! As you’re climbing into the air, you might feel the sensation of your ears wanting top op; this is normal too!It’s just due to the change in air pressure. For a Pro tip: Try chewing gum or yawning during lift-off to relieve those ears! Okay, so you made it into the air, and everything is just fine! What other sounds might you hear?

5 minutes after take-off: Two loud beeps will go off.
This is the pilot telling the flight attendants that the plane has reached a certain altitude. It’s just to keep the crew informed of the plane’s progress. These beeps are a good thing, because it means that the airplane is past the point where those rare safety issues are most likely to occur, which is while the aircraft is climbing.

Drink and Snack Cart!
Ohh, my favorite! Roughly 5 minutes before the flight attendants roll the drink and snack cart through the aisles, one loud ding will sound to let you know that it’s coming. Now is your opportunity to grab a soda or water; and most carts also offer a small snack like pretzels or nuts.

Creaks, rattles, and whooshes
These are all completely normal sounds that every airplane makes in the air. Don’t let them scare you; such a large aircraft is bound to creak, and the rattles are things moving and sliding around. Remember that everyone’s carry-on bags are in the storage bins above you.

If you’re using the food tray, things may slide or bounce around on it. Think of the normal sounds you hear in your car, and multiply that by a hundred – an airplane is much bigger and faster than your car, so the sounds it makes will be bigger too.

Turbulence It may feel and sound kinda scary, but turbulence is pretty normal.
Turbulence is airplane language for irregular air waves. If it’s extra windy outside, or if the weather isn’t perfect, the plane will feel extra bumpy – think of a car on a rough, rocky road. It may sound loud inside the cabin, and things may rattle around a little more than usual.

But turbulence is something that the pilot is completely prepared for and knows how to navigate through – it’s a pretty normal and expected part of a flight. If there’s a lot of turbulence, the pilot may send a ding over the intercom system,warning flight attendants that it might get a little bumpy.

You hear “All call” over the intercom
Don’t worry, this doesn’t mean the plane is in danger. This is just a flight attendant basically calling a meeting with the other members of the crew. The crew of an airplane will, of course, be checking in with each other during the flight. This is to make sure that certain duties have been done, safety checks have been made, the toilet is clogged…just kidding, but you get it.

Flight attendants don’t necessarily need to use the intercom system, but if they know that other members are in a different part of the plane, it’s just easier to do an “All call”

Beeps indicating that you can take your seatbelt off
When the plane has reached a certain cruising altitude and you’ve been flying for a while,it’s safe to take your seatbelt off and move around! The pilot will let you know this by sending a beep over the intercom, and turning these at belt sign off.

These lit-up signs are usually located right above your seat on the ceiling. This may happen a couple times if you’re on a long flight; so the first time, the pilot may make an intercom announcement. This is your chance to use the bathroom and stretch your legs! Okay, let’s get back to the countdown, this time for your landing!

Related :  Most Googled Facts Ever

Two dings 10 minutes before you land
Just like there were two dings when you reached a certain height after take-off, the two dings will ring again when you’ve reached that same level on your descent. Again, this is just letting the flight attendants know that the flight is almost over, and to prepare for landing. You’re almost back on the ground!

A high-pitched whirring sound 5 minutes before landing
This is the hydraulic system pulling in the slats and flap, which are structures on the plane’s wings that change the wings’ shape and help keep the plane in the air. This is called lift. When these structures are pushed out, the plane can keep its lift while it slows down to a safe and comfortable speed and prepare for landing. By this point, you should feel the plane getting lower and lower.

A bump and deep thunk 2 minutes before landing
This means the airplane’s landing gear is coming out, which includes the wheels and anything else in the plane’s undercarriage that helps it land. Mechanical gear in the wings may still be adjusting too. You may hear some whistling as well, since such a big airborne structure is trying to slow down from a pretty high speed, while also dealing with changes in airwaves. These noises are completely normal during a landing, and you might be glad to hear them!

The Landing
The wheels will touch down on the runway, and you may feel and hear some bumps or thuds. Everything is fine – I mean, that plane is pretty heavy, right? Bumps during a landing are totally normal, even expected. You’ll cruise along the runway for a while, so that you can slow down. Then you’ll slowly pull up to your terminal.

You did it! Now it’s time to get your land legs back!Just remember to try and trust your pilot and other crew members. If it’s any comfort, the process for getting a pilot’s license has pretty high standards, plus rigorous coursework and flight time. So your pilot knows what she’s doing! Also remember that you’re a passenger in a huge engineering marvel, you’re going to hear noises!

Think of an airplane as a much larger and complex version of your car. Also, try to enjoy your flight! You’ll see magnificent views, and flying can be pretty relaxing once you’re in the air