What Is Alien Hand Syndrome – At some point, you’ve probably had a moment where it felt like your body was outside of your control. You’ve mindlessly manipulated an item, accidentally dropped an item, or tripped and been utterly perturbed as to how your limb seemingly behaved on its own.

Or perhaps you’ve spent a second or two looking for your keys, phone or wallet, but they were already in your hand. What if such moments where commonplace in your life? Well for sufferers of a condition known as Alien hand syndrome or Dr. Strangelove syndrome–named so because the character in the movie suffered from the disorder, scenarios similar to these can frequently occur.

Alien hand syndrome is an umbrella term for a variety of conditions caused by rare neurological disorders in which someone experiences one or more limbs purportedly acting on their own initiative, outside of the person’s intent or conscious control. Often these conditions occur with the non dominant hand which for the majority of the population is the left hand.

For example, the alien hand of a person suffering this affliction may involuntarily pick up items or fiddle with clothing without the person wanting to do so. Or the hand may reflexively levitate. Sometimes the alien hand engages in ‘inter manual conflict’ or behavior that’s directly oppositional to the other ‘good’ hand such closing a drawer that the other hand just opened or unzipping a jacket that the other hand has just zipped. 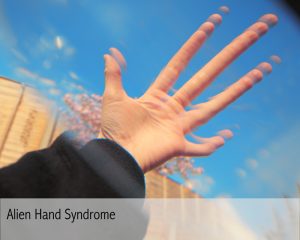 The actions of the alien syndrome affected hand can be so distracting or unruly, the afflicted person will attempt to use their controllable hand to subdue their other hand. In extreme cases, the alien hand may abuse the sufferer–slapping, punching or even attempting to wrap into fingers around their owner’s throat and choke themselves to death.

Those afflicted retain feeling in the alien hand, but may also disassociate from it. Patients may not recognize the hand as their own. Also they may personify and treat the alien hand as an entity separate from themselves,perhaps referring to the hand in the third person, scolding it or considering it evil,possessed.

The main impetus for this condition is an alteration to the brain either via traumatic damage such as stroke, infection, tumor or aneurysm or degenerative brain conditions such as Alzheimer’s disease, and Creutzfeldt–Jakob disease. Also a radical brain surgery treatment for sufferers of epilepsy called Corpus Callosotomy where the hemispheres of the brain are surgically separated by cuts made to the corpus callosum or central nerve tract has also caused this condition.

Advertisement
Related :  5 Minute Workout to Get a Flat Stomach In a Week

Alien hand syndrome is diagnosed through observation and evaluation. However the disorder can be difficult and complicated to identify because it’s a neurological disorder that lacks a psychiatric component. Behavioral and mental issues are much more common than alien hand syndrome and symptoms can sometimes be attributed to a psychiatric disorder, which may be frustrating to theperson affected.

Also, no two cases of alien hand syndrome are the same, symptoms range from mild and occasional to severe. For a number of sufferers, the symptoms spontaneously come and go rather than consistently occur. Overall, alien hand syndrome is fairly uncommon. It was first identified in 1908 when neuro-psychiatrist, Kurt Goldstein observed a patient who developed involuntary left hand movements after a stroke.

It’s not known how many afflicted there are world wide. A study found that over a period of about 15 years between January of 1996, and July of 2011, the Mayo Clinic saw about 150 patients with the diagnosis of alien hand syndrome. It’s possible that many sufferers have been misdiagnosed when symptoms presented while the patients were struggling with other ailments.

Currently, researchers only understand the basics of this disorder. The brain is split into two hemispheres. Each hemisphere has 4 lobes, the frontal, parietal, occipital and temporal lobes fora total of 8. Each lobe oversees various brain functions and all work together to cohesively form your consciousness.

The lobes learn, imagine, control and regulate speech, form memories, and perform millions of other actions. The corpus callosum or the bundle of nerve fibers that runs up the center of your brain connects the left and right hemispheres, and allows for communication passing motor, sensory,and cognitive information between the two sides of your brain.

There are three major forms of alien hand syndrome based on the location of the underlying causative lesion: frontal or anterior, callosal, and posterior. Patients with the frontal variant exhibit groping, clutching, or compulsive manipulation of objects. Frontal is more commonly associated with left brain dysfunction and therefore affects the right hand.

The callosal form is a result of lesions of the corpus callosum and often features thealien hand counteracting voluntary actions performed by the other hand. Another phenomena found in sufferers of callosal alien hand syndrome is compulsive automatic execution of motor commands by one hand when the patient is asked to perform actions with the other hand.

Related :  This is What Really Happens When You Start Exercising

The posterior variant is less common than the other two and caused by damage to theposterior cerebral artery, thalamus, posterolateral parietal cortex, or occipital lobe. These patients frequently experience spasmodic, uncoordinated hand movements or involuntary levitation, which may be task specific.

For example, a sufferer only experiences exaggerated arm elevation while walking. In some cases, the alien hand experiences an odd position, called “parietal hand”in which the palmar surface is withdrawn from surfaces or sustained environmental contact and the fingers distort into an extremely extended posture.

This phenomena is directly opposite frontal form of the condition which reaches out to grasp objects to produce palmar tactile stimulation. Also posterior variant sufferers frequently experience a sensation of strangeness in the affected limb, generally hand but occasionally leg. Posterior alien hand syndrome is generally tied to neuro degenerative conditions.

While each of the three variants have characteristic, distinguishing idiosyncrasies, some patients may concurrently demonstrate components of different variants. For example, a patient who had a callosal hemorrhage that extends into their medial frontal lobe was reported to have both inter manual conflict which is indicative of callosal infarction and compulsive grasping movements with is indicative of frontal damage. Researchers have used MRI scans to study brain activity in patients with alien hand syndrome.

When reviewing images of the brain of a patient who had been diagnosed with alien hand syndrome after right parietal lesion, researchers could recognize which brain regions were activated during involuntary or voluntary actions with the affected left hand. Alien hand movements involved a selective activation of contralateral primary motor cortex, separate from conscious control by intentional planning systems.

However, images of the same patient taken during voluntary movement showed activation of multiple extensive neural networks throughout the brain, including the contralateral right primary motor cortex and premotor cortex, but also the left inferior frontal gyrus orridges, suggesting that the dominant hemisphere of the brain plays an important role in arranging willed actions.

Alien hand syndrome is wildly unpredictable. . . and just creepy. Often sufferers experience depression, anxiety and bouts of frustration or anger as well as loss of a sense of agency as a result of their condition. Some sufferers isolate themselves, worrying about their alien hand ‘misbehaving’ in public and the embarrassment that could bring.

Unfortunately, no cure currently exists. Sufferers have been treated with therapies directed at muscle control, such as taking clonazepam to reduce internal and external stimuli. Also some patients have received injections of botulinum toxin and neuromuscular blocking agents to alter sensory feedback.

Some doctors have had moderate success treating patients with non-invasive methods such as cognitive therapy techniques. One therapy focuses one retraining the dysfunctional hand to re-learn specific learned tasks which in some cases allows the patient to regain voluntary control.

With repeated practice, this therapy is fairly effective, and makes it possible for affected individuals to partake in normal daily activities. Another therapy involves focusing on helping the afflicted to manage their alien hand through coping mechanisms such as satisfying the alien hand’s primitive tactile urges by keeping it occupied with a small item such as a fidget spinner.

Another method involves using an orthotic device to simultaneously muzzle the alien hand and also limit the sensory feedback coming back to the hand from environmental contact. In some cases, alien hand syndrome symptoms have decreased or faded away as patients’ brains recovered from trauma and neurogenesis created new neural pathways.

Often when alien hand syndrome emerges from a specific injury of acute onset, recovery occurs within a year. Sadly for others with the condition it persists until the patient passes away. Despite advances in modern medicine, the human brain is a vast, complex organ that we’re just beginning to scratch the surface of.

There are several ongoing large scale scientific research projects such as the EU’s Human Brain Project working to unlock the secrets of how the brain works, including theories of learning, memory, and complex cognitive functions such as spatial navigation, recursion, and imaging.