What Is Stone Man Syndrome – There are some rare diseases that exist in the world that sound like something from a horror movie. Imagine you had a water allergy, which meant drinking water would cause severe pain, or if water touched your skin it would cause you to develop a painful rash. It exists, and it’s called “aquagenic urticaria”.

Or what about experiencing “Laughing Death” Also known as Kura disease? That should be self-explanatory. Then there’s “Morgellons disease”, a feeling that insects are chewing, nibbling or crawling on your skin. That would be enough to drive you crazy, and there are some experts out there that say it’s not actually a physical disease, rather it’s a kind of delusional psychosis.

Today we are going to concentrate on one of the strangest diseases known to mankind, in this article of henrire.com, What Is Stone Man syndrome?. Stone man syndrome is kind of a crude term given to a disease known as fibrodysplasiaossificans progressiva, also known as FOP.

It’s thought that the disease affects only one in every 2 million people worldwide, according to the U.S.  National Institutes of Health… and you really don’t want to be one of those unfortunate people. If you have it, despite what you might be thinking, you don’t actually turn into stone-like something from a fantasy movie.

Let us explain. All humans start developing bone when they are in the fetal stage of life, and they continue to grow up until a certain point in their development, stopping growing when the child becomes an adult. Bones grow as cartilage and muscle in the body is ossified. 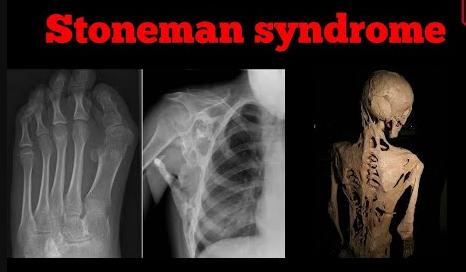 The process of ossification in the dictionary is described as being the hardening of muscle tissue until it becomes bone. That’s how your bones grow, and your body knows when this process should end. Unlucky for some, that is not always the case. Their bones do not stop growing, and over the skeleton, another skeleton grows.

This is known as heterotopic ossification. There is nothing doctors can do to stop this. People can survive a good few years with this disease, and we will talk about some of them later. One terrible thing for these people is they must be very careful what they do in life, as one small injury, even a kick in the leg, can cause more bone growth.

It’s thought the reason why injuries can cause fast growth is because the immune system goes to work as it should after an injury, only for these people they have an excess of help. When you have stone man syndrome when the muscles, tendons, or ligaments get damaged, bone growth can, or most likely will, occur.

These are known as flare-ups, although the disease causes extra bone growth without such flare-ups. The extreme bone growth happens first on the upper part of the body, spreading to other parts of the body as the child grows into an adult. This can have devastating consequences, not only affecting the mobility of the sufferer, but sometimes making it hard to speak, eat, or worse, breathe.

That’s due to the rib cage being extended by bone growth. Even worse, when surgeons have removed the extra bone, it only grows back, and at a much faster rate, too. It seems the body just won’t have it any other way. As for the cause, that was only discovered in 2006 after a long-time of professionals not knowing what was going on.

It’s like this. Something called the ACVR1 gene gives instructions for producing bone morphogenetic protein type 1 receptors. This protein controls the development of bones. In sufferers of stone man syndrome, a mutation occurs which basically causes more of this protein to activate when it should not.

There is a much longer and more complex explanation of this, but it’s too complicated to explain here. This strange gene mutation is not something parents can prevent, or doctors can detect when the child is in the womb, although it’s thought a few cases have been hereditary.

According to a rare disease website, “Most patients with FOP are bedridden by age 20 and have a life expectancy of 40 years”. Even those that seem to cope the best with the disease shouldn’t ever play contact sports as kids, and they should be careful all day every day not to bang into things.

The smallest injury can create more bone growth. As FOP progresses, most patients will be bed-bound and will need constant caring. One better-known case was that of Harry Eastlack, in the early to the mid-20th century. In a way, he did turn to stone, and at the end of his life could only move his lips.

A more recent case that captured the attention of the world was that of Seanie Nammock, from England. She was interviewed in 2014 when she was just 18. She was busy studying her A-levels, although, as the media put it, she would eventually be “turned into a statue”. Her neck and back at the time were already so affected by the extra bone growth that she could not move her hands above her waist“.

It doesn’t help that I’m accident-prone,” the girl told The Mirror newspaper, “I’m always falling up or downstairs because I can’t hold the banister. My balance is also a problem because of the way my arms are locked. I can’t put them down to break my fall either – so it can be really scary”.

That didn’t stop her gaining 10 GCSEs, five of them with an A grade. Also, in the UK, one year later, 23-year old Whitney Wheldon was interviewed about living with the condition. The girl’s disease had progressed further than the previous girl’s, and now she is wheelchair-bound and struggles to move her head.

She told the Express newspaper that she still goes out to the pub with friends, stating that she had been very active as a child. Now, she says, “I stay positive and don’t think about my body turning to stone”. Is there any hope for these people? The American media reported in 2015 that indeed there is.

It seems that researchers are closer now to developing an antibody that stops the ACVR1gene from giving the instructions to form new bone. Lab mice that were genetically engineered to have the disease were given this antibody and the extra bone formation stopped. Up until now FOP victims have only been able to take medicines that helped with the pain, but it seems we may be on the verge of finding a way to heal FOP.

The downside is that many studies that involve animals don’t show the same results in humans, and two years later we cannot find any updated news concerning the progress of this healing antibody. We will leave this show on a positive note, though, and one of the most recent cases of FOP to hit the media.

That is the case of 11-year old Caleb Burgess from Castle Rock, Colorado. The boy started suffering from neck pains when he was just seven years old, but at eleven he was still active and enjoyed playing baseball – although understandingly playing it the safest way possible.

His mother said he was a happy kid, but knowing what he has – especially with the stigma of a name such as stone man syndrome – can get him down. “We have FOP fact sheets that tell us the worse possible case. Those he does not like. Other than that, he is pretty positive and happy”, his mother told Fox News in 2017.

So, what are your thoughts on this disease? How would you deal with it, if need be? And doesn’t it sound a little like the Greyscale Infection in Game of Thrones? Let us know in the comments.