What the Smallest Things in the World Look Like – Check it out: Did you know there are more living things on and inside your body alone than on the entire Earth? And the world is full of this micro-stuff! Wanna know more about how huge our planet really is? Then let’s look through my super-powerful microscope! We’ll start with things you can see with your own eyes, though, and the first one of the smallest thing in the world is…a bacterium! I know, I was surprised too.

It’s obviously the largest bacterium in the world, and it lives in the coastal waters of Namibia. Its length is 3/4 mm, and it’s larger than, say, a grain of sand or salt. So yeah, you can even touch it! More than half as small is a dust mite — these pests that bug you at night only grow to be around 1/3 mm.

They’re large enough to be seen, but you still can’t do that because they’re translucent. Gross. By the way, remember those amoebas from your biology classes? Well, they’re the same size (or sometimes even twice as big!) as dust mites. For a single-cell organism, that’s huge! Going a bit further, and here, the next smallest thing in the world : your hair.

A single strand of human hair is just 1/10 mm thick, and it’s the smallest object that you can see without using a microscope. At 10 and 7 micrometers, you’ll find white and red blood cells, respectively. These cells are of utter importance to our bodies: white ones fight various diseases, while the reds transport useful stuff throughout the whole blood system. 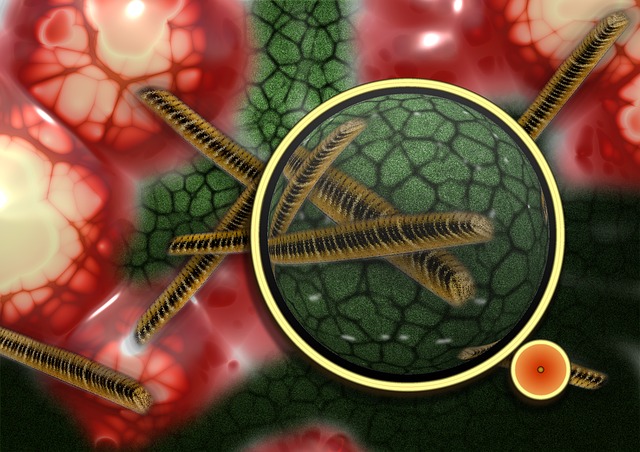 The next smallest thing in the world, two things that are similar in size and you won’t believe it: a clay particle and an E. coli microbe, and they’re both 2 micrometers in diameter. This tiny size explains why clay doesn’t let water through it: the distance between its particles is just too small and they cling together. E. coli, in its turn, is a bacterium that lives in your gut and produces vitamin K2.

Now, a little further we meet the largest virus. It’s called Mega virus, and it’s just 440 nano meters in size. Just imagine how small are the rest if this guy is the biggest of them all! Oh boy, I think it’s about to attack us, let’s go, quick! Phew, we made it. Okay, going further again: 200 nanometers is the size of another virus called bacterio phage.

If you translate its name from Greek, you’ll find out that it feeds on bacteria. This little guy looks like a tiny robot spider of sorts, don’t you think? At the same time, bacteriophagi are the smallest things you can see through an optical microscope, so everything else we’ve got today can only be observed with an electron one.

Pushing harder, the next smallest thing in the world, we go down to 3 nanometers, which is the width of a DNA strand. That’s right: I’m talking about the DNA that contains just about all information about virtually all living things on Earth. Don’t let its width fool you, though: the length of its strands is simply enormous. Suffice it to say that a single cell of human body holds about 10 ft of DNA.

The next smallest thing in the world. Smaller still, there’s a molecule of water at 280 picometers. H2O means there are two atoms of hydrogen and one of oxygen, which binds them and makes the molecule look like Mickey Mouse. Hydrogen atoms, in their turn, are just 31 picometers in diameter, and they’re the most frequently met atoms in the world.

They consist of just two elements, one positively charged proton and one negatively charged electron orbiting around it. Speaking about electrons, these buddies haven’t been properly measured because they’re just too small for that. Anyway, though, the classical model of measurement says an electron is about 5 femtometers in size, that is, 5 trillionths of a millimeter.

Compared to an atom it belongs to, it’s about a million times smaller, but it depends on an atom. If you think, however, that electrons are small, then how about this: protons and neutrons,the other two main parts of an atom, are 5 times smaller than electrons! Unlike electrons, though, which revolve around the atom’s core, or nucleus, they’re found within it, giving it a charge and a mass.

Now be careful: from here we’re going into the unknown and unproved. We’re now at the size of 100 attometers, where an attometer is one quadrillionth of a millimeter, and even saying it makes me wonder, if not stumble over the syllables. Anything that’s smaller than this can’t be measured with any degree of accuracy, so the sizes of the stuff we’re going to see are very, very approximate or even hypothetic.

Related :  Why Airplanes Don't Have Parachutes

And the first weird things we see down there are up and down quarks. They’re both about 1 attometer in size, and they’re the lightest of the six types of quarks. I guess I should explain. A quark is a particle that makes up protons and neutrons in an atom’s core. Like I said, there are six types of them, and they all have different properties.These two little guys, for example, give the atom its positive or negative charge. Can you guess which gives what? Let me know down in the comments!

Anyway, further still, at 400 zeptometers  we meet a strange quark. It’s a third type, and its name is well deserved. It’s about half as small as the up and down quarks, yet it’s 50 times as heavy! Kinda like neutron stars that can be the size of a city yet weigh more than the Sun.

Anyway, scientists aren’t sure strange quarks can even exist in our world, and they can only appear — theoretically — if an atom is squashed hard enough to break up into quarks. I know this is mind-boggling, but bear with me — this isn’t all yet. At 100 zeptometers, we see charm quarks. They’re even more massive than strange ones, but at least their existence is not questioned.

They’re known to have a positive charge and they were found in experiments with the Big Hadron Collider. In fact, they were discovered in subatomic particles, such as well-known protons and neutrons. But even though charm quarks are extremely small, their discovery led to a whole lot of scientific breakthroughs. Next up are bottom quarks with the size of just 30 zeptometers.

Not a lot can be said about these tiny guys: they have a negative charge and they quickly transform into other, bigger types of quarks. And finally, the sixth type is top quarks. Their size is 100 yoctometers (yet another part per thousand added), and, against all logic, they’re the most massive of all quarks.

Just think: they’re 100,000 times heavier than up quarks!No wonder they’re called top! By the way, their other name is truth quarks, whatever that means. Anyway, although their existence has been experimentally proved, scientists have also found that they can only exist for a tiny fraction of a second. So sad.

But even that’s not the end of it, and there are particles even smaller than top quarks. One of them is a neutrino, measuring about 1 yoctometer. Neutrinos have no charge of their own and they’re almost not affected by any of the fundamental forces of the world. They fly at high speeds and pass through all kinds of matter as if it doesn’t exist — even you and me, right this moment! No, you can’t see them.

And finally, What is the Smallest Thing in the World? We’re at the bottom of all creation: the quantum realm. Here, at sizes so small you can’t even compare them to any known measurement units, there are only two things, and those are theoretical at best. One is called a string, and you might have heard about it in sci-fi movies. The string theory suggests lots of possibilities, and one of those is that a string is one-dimensional itself, but its vibrations take it to all the other dimensions.

Scientists also argue that all particles are strings too, but I won’t bother you with too much detail on that, if you don’t mind. And the second thing on this level is believed to be quantum foam. It exists according to another theory, and it makes up the whole space-time. Still, once again, it’s never been proved that it actually is somewhere in the world, so who knows, maybe there’s something else entirely that the universe consists of? Both these matters can only be measured with a unit called Planck length.

I won’t bug you with scientific stuff and just say that it’s infinitesimally small. Planck length was created specifically to measure theoretical things, such as strings and quantum foam, so no wonder it’s so tiny. I guess everything must have its measure, right?

There were some of smallest thing on the world, I hope this information can be useful.