What to Do When You See a Bear – So picture this. One day you’re on a relaxing stroll through the woods, taking in the fresh morning air. The only sounds are chirping birds, swaying branches overhead and the crunch of leaves under your feet. Suddenly, your relaxation is interrupted by the sound of twigs snapping behind you. You turn around and are suddenly face to face with a grizzly bear the size of your car.

Now what are you going to do?
a. Compliment him on his coat.
b. Say “My, what bright shiny teeth you have”
c. Introduce the bear to your much slower companion, while you skedaddle.
Not to worry, because I’m here to tell you exactly how to survive a surprise visit from Yogi’s bigger cousin. Bears live throughout the world, from Canada to the Andes, and Northern Europe to Southeast Asia.

These intelligent, muscular omnivores usually prefer to keep their distance from humans,but can be a serious threat on the rare occasion when they turn violent. Now, the best way to prevent bear attacks is to avoid direct contact with the animals as much as possible. Duh. Yep, this might seem like a no-brainer, but whenever you plan a weekend outing, it’s essential to check if there are any known bear habitats in the area you intend to visit. 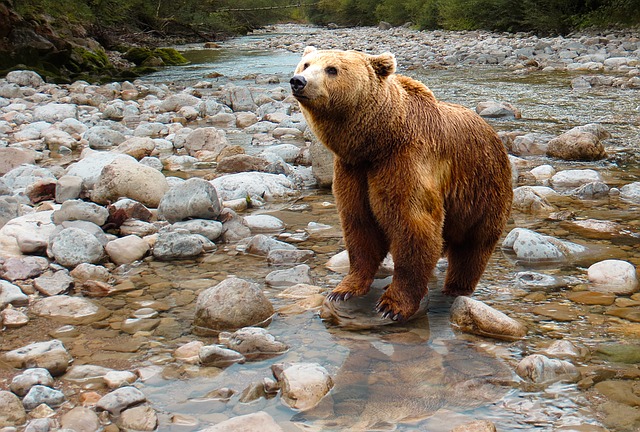 If it turns out bears do inhabit your planned hiking route, then preparation is in order. Bears aren’t evil creatures, and their attacks are extremely rare. On average, there are only about three fatal attacks per year. This puts bears well behind sharks, wolves and even vending machines.

In fact, Bears generally try to avoid humans when we come near. It’s very common for hikers and campers to come within a few hundred feet of a bear and never know it. This might sound like a cliché, but they really are more afraid of you than you are of them. When bears turn violent, it’s usually because they’re surprised and frightened, or trying to protect their cubs.

They tend to be most active during the day when they’re out foraging for food, although some breeds are nocturnal. Bears also prefer following trails and clearings to forcing their way through the brush; so if you remain alert, the odds of sneaking up on one by accident are pretty small. If you’re camping or taking a multi-day hike, some jurisdictions require you to store food in a bear-proof container: specialized cans that bears are unable to open.

Related :  Why Snakes Have Forked Tongues

Another good piece of advice is to keep toothpaste out of your tent. Many species of bear are known to be attracted to the smell. A little bit of morning breath is worth it if it means keeping your summer activities bear-free. These are all excellent ways to avoid surprise bear encounters, but sometimes prevention just isn’t possible, and you find yourself in a “hairy” situation.

If you’re a responsible wilderness explorer, you already researched bear behavior before you ventured out, and know how your new furry friend is going to react. If you’ve stumbled upon a family of black bears, you’re in luck. Well sort of. These smaller breeds prefer to avoid conflict whenever possible and will usually retreat when threatened instead of becoming aggressive.

These bears are excellent climbers and will use this ability to their advantage, scaling a nearby tree to avoid danger. If you run into one, there’s a decent chance it’ll be long gone before you’ve even had time to react. Black bears account for most of the bear encounters in the United States since they tend to be more adventurous when it comes to entering human areas.

Thanks to their skittish nature, they tend to be seen as more of a nuisance than a threat. That said, bears have been known to injure dogs that tried to follow them deeper into the woods, so keep a tight grip on Fido’s leash whenever you’re out and about with your best friend. Brown bears, on the other hand, including the infamous North American Grizzly, tend to be much more aggressive when threatened.

While they wouldn’t usually turn hostile at the sight of people, hikers still need to be careful when one approaches. Bears are curious animals, and once the initial shock has worn off, they’ll often approach whatever spooked them to determine if it poses a threat. This isn’t an inherently aggressive gesture, but can be intimidating, so just remember to stay calm and keep your wits about you.

If you’re in a group, which is always a good idea in bear country, stay together. If you packed bear repellant, put it in your hand with the safety off, but don’t make any aggressive moves. Instead, back away slowly while speaking in a calm, clear voice. Usually, this will be enough to defuse the situation, and the bear will retreat once it feels confident you aren’t an active threat.

Related :  How to Identify a Bug Bite and What to Do With It

In the rare cases that the bear holds its ground; you may be better off picking a new path since confrontation is the last thing either of you wants. Now, if you absolutely need to get past and are one hundred percent sure you’re dealing with a black bear, you might consider trying to move it out of the way. This can be done by looking the bear in the eye and firmly telling it to leave.

While a bear isn’t going to understand your words, your tone can convey a lot of information. As long as it has a clear direction in which to retreat, it should take the hint and get out of your way. Again, only do this if you’re entirely and without a doubt, positive that you’re dealing with a black bear.

Brown bears will not take your aggressive tone very well, and in the wild, it can be much more difficult to tell them apart then you might think. Despite the names, black bears can be brown and brown bears can be black, so unless you’re the kind of expert who probably doesn’t need this guide anyway, it’s better not to take your chances.

But what happens if the bear starts behaving aggressively? What do you do when they begin swatting at the ground and snorting angrily? They might even make a few threating lunges in your general direction. Oh boy. This sort of behavior generally happens in one of three situations: the bear is either defending cubs, protecting its food or is spooked, and you’re way too close for comfort.

Regardless of the reason, your next steps will be the same: quickly and calmly back away, preferably in the direction you just came from. Most of the time that will be enough, but if the bear starts to come after you, this is where the repellent comes in. You never want to escalate the situation if you don’t have to, but that spray is your best defense if the bear decides it means business.

Don’t go firing it off on a bluff, but if the bear comes within twenty or thirty feet,give it a good blast aimed just above its head. That should guarantee the spray gets in the bear’s eyes, nose and throat, forcing it to back off. If you’re too close for that to work, it might be time to play dead by laying on your stomach and covering the back of your head and neck. In most cases, that’s all you need to do.

Very rarely though, the bear won’t just appear aggressive, it might actually be aggressive. If it continues to follow you even as you back away, it’s time to think about fighting back. Like right now! Look the bear in the eyes and shout while making yourself look bigger. Stamp your feet on the ground and maybe even take a step or two towards it.

If there’s a stick nearby, grab it and brandish it threateningly, doing the same with your bear repellent. Your goal is to show the bear that you’ll fight if attacked, so you can’t let it intimidate you. If the bear moves in to attack, use the spray and start hitting it with anything you can get your hand on.

Kick it, punch it, insult it’s mother, hit it with a stick or a rock, focus on the eyes and nose and do whatever you have to do because, at this point, you’re fighting for your life. As I’ve already said, this kind of attack is incredibly rare but can happen, so you need to come prepared. What’s important is not letting the situation escalate to that point.

A vast majority of bear encounters never turn violent, and very few even come close. They aren’t aggressive under normal circumstances, so a lot has to go wrong before you find yourself locked in battle. Always remember to remain calm, keep your distance, and back away from any fight that isn’t completely unavoidable. Bearly.

So now you know what to do if your weekend hike attracts some not entirely wanted attention. Now that you’re prepared to fend off fuzzy danger, what outdoor activity is your favorite? Let me know down in the comments.