What You Must Know to Survive a Tsunami – A tsunami is a string of immense waves that appear after earthquakes, volcanic eruptions,underwater landslides, and even asteroid impacts. The largest mega-tsunami wave ever recorded was documented on July 9, 1958, in Lituya Bay, in Alaska. The height of the wave reached a stunning 1,720 ft. This situation is no joke, and as soon as you find out that a tsunami is coming, you must act immediately to save your life. Here’s what you need to do right away. If you’re on dry land : 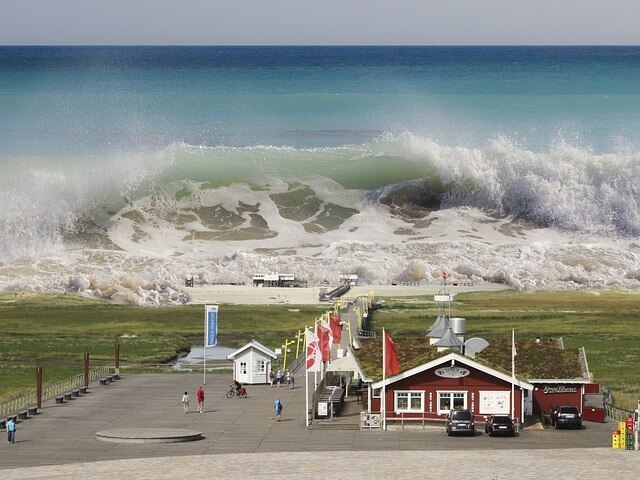 1. No matter whether you live near the coast or travel there for the weekend, you should know the signs of an approaching tsunami. It might be a deafening roar that’s coming from the ocean, or some other unusual ocean behavior. For example, the water may suddenly drain, showing the ocean floor, or, vice versa, awall of water may appear on the horizon.

2. Also, pay attention to strange behavior changes in animals. If they unexpectedly group together, hide in different nooks, leave the area, or show extreme anxiety, these may be signs of an approaching natural disaster.

3. As soon as you hear a tsunami alert, don’t wait for even a second – evacuate immediately! Leave behind your personal belongings and documents; now is not the time to think about your possessions. Gather your loved ones and use any available transport to get away from the coast: hopin your car, get on a bike, or simply run as fast as you can.

4. Move as far away from the shore as you can, heading toward high hills, mountains, or a forest.

5. If possible, go at least 2 miles inland and 100 feet above sea level. If you’re trapped by the rising water, choose the highest and the most solid building, and climb to the top. It’s not an ideal way out since the construction can collapse under the force of the tsunami waves, but at least it’s something.

Related :  Driving Tips for New Drivers That You Can't Learn in a Driving School

6. Also, keep in mind that roads often get wiped out by tsunamis; therefore, after everything’s done, you may have trouble finding your way back. – In most cases, tsunamis are closely linked to earthquakes. That’s why you should try to escape to open areas with no or few buildings to avoid being hit by falling debris.

7. On top of that, stay away from power lines, walls, bridges, and whatnot. Even if these constructions look sturdy enough, they can collapse during the aftershock.

8. The whole time, pay attention to tsunami warnings and evacuation orders. If you aren’t in a tsunami hazard zone, stay where you are and wait for further instructions.

9. Keep in mind that evacuation routes in potentially dangerous areas are often marked by a special sign with a wave and an arrow on it. It points in the direction of higher grounds.

10. If you fall into the water, grab onto a tree trunk, a door, or a raft – in short,find something that floats, and the sooner, the better.

11. Even when you think that everything’s over, don’t be too quick to relax. Tsunamis come in waves, and there may be dozens of them. What’s worse, every following wave might be larger than the previous one, and they can last for hours. So, brace yourself for additional waves, aftershocks, and a long, patient wait.

12. Try to find reliable information by listening to radio updates. It’s not the best idea to trust word of mouth; otherwise, you might return too soon and get caught in more waves.

13. Remember that you need to survive not only the tsunami itself, but its aftermath as well. Once the water goes down, you’ll see tons of potentially hazardous debris. Do NOT wade in floodwater since it may be way deeper than it seems.

14. Don’t forget about the risk of electrocution. The water can be electrically charged by damaged underground power lines. Also, don’t touch any electrical equipment if you’re standing in water, or if the thing itself is wet.

15. Don’t come close to houses and other buildings because, after the flooding, they’re likely to become unstable. Now if you’re out at sea:

16. If you’ve heard about an approaching tsunami when you’re on a boat or a ship at sea, try to move to deep water as fast as you can. The safest depth is 150 ft or more.

17. The thing is that in the open sea, tsunami waves can reach a staggering length of hundreds of miles, but they’re usually no more than several feet high. On the other hand, far from the shore, such waves usually travel at a breakneck speed of up to 500 miles per hour. But when a wave is getting closer to the coast, it slows down to 30 miles per hour and grows in height.

18. If you’re a surfer, and a tsunami is nearing, paddle toward the shore, and run toward the highest place you can spot. You might still have several precious minutes until the tsunami hits the beach.

19. If a tsunami is drawing nearer while you’re far from the shore, paddle toward the horizon,to the deep sea. There, you might not feel the devastating force of the tsunami waves that much; plus,you’ll have a floatation device. Also, in the open sea, you won’t have to worry about being hit by debris.

20. Finally, if you’ve managed to paddle away from the shore and are out of danger for the time being, don’t hurry to return back to the beach. Wait for at least a couple of hours – tsunamis tend to last for a while.

A tsunami’s waves can travel at a speed of 20 to 30 miles per hour and reach a height of 10 to 100 feet. They can surge up to 10 miles inland and cause catastrophic flooding, which damages all kinds of transportation and communication, and destroys the fresh water supply. About 80% of all the tsunamis are born in the Pacific Ocean’s “Ring of Fire,” which is a seismically active zone with 452 volcanoes and the world’s largest number of earthquakes.

Related :  11 Quick Exercises to Improve Your Memory by 80%

Once a person gets swept away by a tsunami, the chances they’ll make it out of this ordeal alive are slim to none. However, it’s not totally impossible. The largest earthquake that’s ever been recorded happened on May 22, 1960, off the coast of southern Chile, and its magnitude was a bloodcurdling 9. 5 on the Richter scale.

Destructive mega-tsunamis caused by this earthquake hit not only Chile, but also Hawaii, the Philippines,and Japan. By the time the earth had stopped shaking, Denis García, who lived in the port town of Corral, in Chile, was still unaware of the sheer force of the disaster. Not knowing that his relatives had already reached higher ground, and were safe, the man was frantically searching for his family.

That was when García noticed something bizarre. As he turned to look at Corral Bay, he saw that all the water had retreated, and these a floor was left bare. García had never observed such an intriguing phenomenon before, and decided to investigate it closer. It turned out to be a near-fatal mistake. Distracted, the man hadn’t noticed a huge 40-foot-high tsunami wave speeding up toward him until it was too late.

What saved Denis García that day was a piece of debris he managed to cling to. He spent hours being tossed by the raging waves before he climbed onto the roof of a house that was floating past. Luckily, it saved the man, and he lived to tell the tale. But remember that such a miraculous survival story is one in a million. That’s why, as soon as you hear about an approaching tsunami, don’t waste any time.

If you have any other recommendations that can save your life in case of a tsunami, let me know down in the comments.