Why Airplanes Get Delayed So Often – You know this feeling of frustration when you’re about to fly to some exotic country for an unforgettable vacation, and then suddenly see that your flight is delayed? Or worse, you’re going to an extremely important business meeting, and a delay in your flight ruins it! I don’t know about you, but I’m kind a interested in why this happens sometimes. And although it’s never pleasant, it seems there are pretty good reasons for delays.

First, to be fair, about 80% of all flights are ON time — that is, within 15 minutes of the scheduled time. The other 20% are delayed, and it might seem a huge number, but consider this: a commercial flight is not like hopping into a car and driving away. It’s an extremely serious operation that requires lots of coordinated work from hundreds of people. 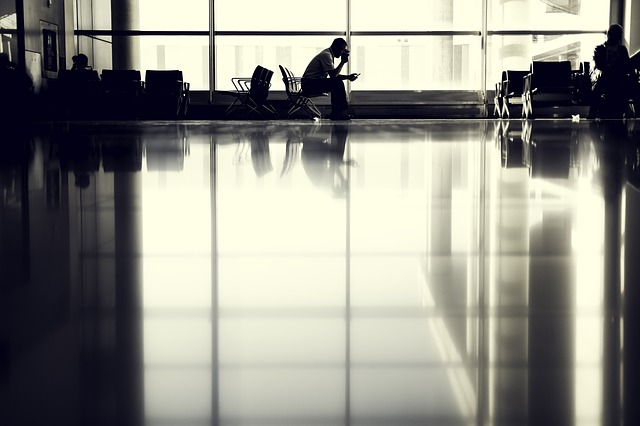 Just recall how many steps do you, as a passenger, need to take to get on board! It’s a wonder how flights even take off on time at all! But still, I perfectly understand how upset a delay can make you, so here are the most frequent reasons for that.

1. Security
It’s no secret that airports have lots of security procedures in place, and although they can sometimes seem ridiculous (like that rule where you’re only allowed small bottles in your carry-on baggage), they’re absolutely necessary. But what you probably don’t know is that passenger security check isn’t the only thing airports have to do to ensure your safety.

2. Weather conditions
Despite what most people think, weather isn’t the top reason for flight delays. It’s an important factor, of course, but most of the time flights still go on time even in bad weather. That’s because modern airplanes are designed to withstand a lot of things — even thunderstorms! In fact, even a direct lightning strike can’t do much harm to a plane, and it happens more often than you think!However, nobody would risk hundreds of lives and an expensive aircraft for no good reason,and weather delays do occur.

3. Technical troubleshooting
This one might seem the most outrageous: the air plane has a clearance to fly, the weather is perfect, but then some technical issue emerges that hasn’t been noticed until now. I mean, why not earlier?You see, pilots run final checks right before the flight, and if they see something’s off, they call the ground crew and fix things together.

If they don’t succeed on time, then you see the “Flight delayed” message on the board — or even hear that you must go back to the gate again. But you know, I think you’ll agree with me that it’s better if they find problems and solve them while still on the ground.

4. Preparations for the flight
Preparing an airplane is a serious business,and any mistake here can cost much more than just money or time. Usually, though, the plane is ready on time, and it’s a rare thing when it’s not. Such delays are mostly connected with things like fuel being late or cleaning not done in due time, to name a few. I know, it doesn’t seem like a big deal, but every small detail matters — after all, it’s your safety and comfort in flight.

5. Waiting for connecting passengers and their baggage
Connecting flights are the most difficult to handle for obvious reasons: there are two different airplanes that need to adjust their schedules to each other. It gets even more complicated when connecting flights are close in time: one must arrive precisely on schedule not to delay the other. And still that sometimes happens.

If the delay is not too big, the second flight can be held, and the captain will tell their passengers why. This way, passengers from the first flight can have some time to get on board the second airplane. On top of that, there’s the issue of getting their bags from one plane to the other, and that can take even more time.

I’m sure you’ve noticed that baggage doesn’t arrive to the reclaim immediately; there’s at least 10-15 minutes of waiting before that. Well, at least it’s understandable — I guess anyone would appreciate an airplane waiting for them, and you could find yourself in such a situation like anyone else.

Related :  Aliens May Have Visited Earth But We Haven't Seen Them

6. Waiting for and loading the cargo
You might not realize it, but commercial aircraft carry not only passengers and their stuff, but also some cargo. In most cases it’s air mail: yes, packages you send off to other cities or countries are basically delivered by passenger airplanes. It can be other things, though, and it may take time for such cargo to be delivered to the airport, checked, and then loaded onto the aircraft. Luckily, delays caused by cargo are usually not too long, so you won’t be asked to return to the gate while waiting and loading is in process. Still, it can take up to an hour, so you’ll have to be patient.

7. Waiting for the crew
Often, the crew for your flight arrives from another one that has just landed in your airport. And it sometimes happens that their previous flight is not exactly on schedule for some reason. If this is the case, then your flight might be delayed — there’s simply no one to man your airplane. Flying without a pilot isn’t going to happen, you know.

However, this situation usually only arises in local airports, while in large hubs there’s always a crew on standby, waiting to be called in case of an unexpected delay. Everyone knows emergencies do occur, so extra measures are always taken in advance.

8. Weight overload
Many airplanes have precise weight restrictions,and if they’re violated, the flight is not allowed. These restrictions include all of it: the weight of passengers and crew on board, the baggage, the cargo, and even the fuel. Weight check is performed at the last minute, so that the crew knows how much exactly the airplane is going to weigh in the air, and if it’s too much, some passengers or baggage are to be pulled off the flight.

That’s where a delay may happen. If you worry it might be you at some point, though, don’t fret: airlines normally pull their own staff that are traveling on such planes.

9. Food
Airplane food might not be the most delicious thing you’ve ever tasted, but it must be there all the same. And it’s not cooked on board, of course: it’s provided by special airline catering services. If you’re at a busy airport, you just might get delayed because your service hasn’t delivered the food for your airplane on time.

It sometimes happens that caterers simply can’t find your aircraft among others. And since catering is a mandatory service on a flight, you won’t take off until the food is on board and ready to serve.

10. Strikes
Airport employees go on strikes almost every year, and it’s among the top reasons for flight delays in Europe. It’s perfectly understandable why they do that: airport staff have lots of responsibilities and often they’re severely underpaid. Every time, they demand different things, from more vacation days to more humane working conditions, but the result  is the same: dozens of flights are delayed or even cancelled, and thousands of people don’t get to their destinations on schedule.

11. Airport congestion
It might seem weird, but flight traffic is getting heavier with every passing year, and airlines keep getting in trouble with that. Busy hubs are the most concerned: more and more airplanes arrive and depart all at the same time, and your aircraft might have to wait in line for a long time before finally proceeding to the runway.

Usually, the flight captain would just say it out loud: “Dear passengers, our flight is delayed because of the heavy traffic. ”Basically, we’re coming to a time when traffic jams aren’t just the car drivers’ problem.

12. Air traffic control
Like I just said, the number of flights keeps growing, and it’s getting harder and harder to keep track of all of them, especially since the ATC equipment is not really up-to-date. That’s not an issue to worry about, though: even with the old technology, air traffic control can ensure that your flight is safe.

It’s just that such a large number of flights as there is today requires the ATC to delay some of them in order to get a clearer picture and avoid confusion. When this happens, it’s best to just patiently wait — it’s your safety that’s at stake,and you can’t do anything about it anyway. What about you? How do you usually cope with flight delays, if you’ve ever experienced one? Share your solutions down in the comments.