Why Buses Have So Big Steering Wheels – Have you ever stopped to think about how much we rely on buses? Whether you use one for school or utilize public transit, buses are so engrained in our daily lives that there’s a lot of questions we could—and should—be asking about them!

1. Why is the steering wheel so darn big?
Turns out, it’s for safety reasons! Buses didn’t always have power steering, so drivers had to use all their muscles to turn that regular-sized steering wheel to maneuver such a huge bus. Their turns need to be accurate so they don’t cause a disruption in traffic. And parking would’ve been difficult too. When power steering became standard in the ‘50s, a big steering wheel had to be added to accommodate the rotation of those huge wheels. It helps the bus driver stay in control!

2. Just how big are those steering wheels?
The steering wheels on buses are generally between 16 and 22 inches across. These massive steering wheels, and the bus itself, are subject to yearly inspections. You’d probably also be surprised at how many laws surround buses, which are imposed by Departments of Transportation and other safety administrations. The rules are particularly tight for school buses, which is a good thing! 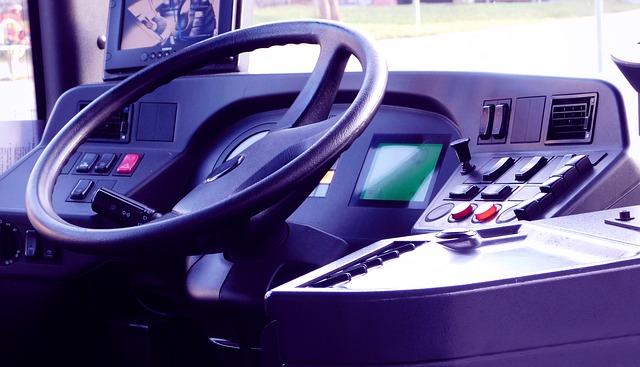 3. Why aren’t there seatbelts on buses?
Research shows that buses are one of the safest ways to travel, even without seatbelts; upto 40 times safer, in fact, than traveling by car!In regards to school buses, they’re safer due to something called compartmentalization;this means that the seats are very close to each other, have high and padded backs, and are high off the ground. This means that in the event of an accident, the impact would occur underneath the bus,and the seat in front of you would act like an airbag.

4. Speaking of school buses, why are they yellow?
If you live in the U.S., school buses are actually required to be yellow by law! This may have to do with how easily we can spot the color yellow—it’s one of the first colors on the spectrum that we see. Our eyes are also good at seeing yellow in our peripheral vision; that is, even when it isn’t directly in front of us. Plus, yellow is the color most easily seen when it’s foggy, rainy, or snowy. In short, school buses are yellow because it keeps students, other drivers, and pedestrians safe!

5. What exactly is “School Bus Yellow”?
It’s not really that Primary Yellow color is it? “School Bus Yellow” is actually a mixture of yellow and orange to create a unique mango-like color; for safety reasons, the goal was for the yellow of a school bus to stand out from the yellow of regular cars, construction vehicles and equipment. So school buses are their own unique shade of yellow—you might even see it on a crayon!

6. How much do buses weigh?
When it comes to school buses, there are different regulations that dictate their size. The average school bus weighs between 14,000 and 19,500 pounds. As far as your standard public transit bus, they can weigh upwards of 30,000 pounds!Just the tires alone weigh about 150-200 pounds—each! Have you ever wondered about this; and does the weight surprise you?

7. How many people can a bus transport?
The average school bus is 35 feet long and can carry 64 passengers. Obviously, students can’t stand while riding in a school bus, but you can in public transit! The average city bus is about 46 feet long, and can carry about 120 people, including the sitters and the standers. These are sometimes also known as “articulated buses”, which they can pronounce words very clearly – no no, it really means that they’re made up of two sections held together by a joint.

8. What does it take to become a school bus driver?
You must be at least 18 years old, and pass a physical and vision test. You’ll have to apply for a commercial learner’s permit and pass a thorough written test. Then you’ll have to complete 14 hours of classroom work, plus 6 hours of in-bus training. Finally, you must pass your road test, which includes a pre-drive inspection, a test of your ability to perform basic road maneuvers, and a railroad crossing. In addition to all of that, you have to renew your commercial driver’s license every 4 years, which requires refresher training and passing another written and road test!

Related :  Why Planes Turn Off the Lights During Landing

9. What was the first public transit bus like?
The Omnibus started the modern public transit craze in 1826. These were horse-drawn cars that could only carry 8-10 people at a time. While the system was modern for its era, traveling this way was really uncomfortable and potentially smelly; streets were still paved in cobblestone, making for a bumpy ride, and that horse would probably have to make a few, uh, pit stops. Except he wouldn’t stop.

10. Who was the very first public transit bus driver?
Well, depends on where and when! There are records of a man named John Greenwood operating a scheduled bus route from Manchester to Pendleton in the UK as early as 1824. These would’ve been the initial horse-drawn models. If we’re talking about the buses we’d recognize today, the very first driver is unknown; but we do know that one of the first mass “motor bus” companies was the Yellow Coach Manufacturing Company, founded by John D.  Hertz in 1923. He ended up selling most of his shares to General Motors in 1925.

11. How did we get to the modern buses we use today?
After the horse-drawn Omnibus came the Horse Car, the Cable Car, and then the Street Car. In 1896, we arrived at Rail Transit, meaning subways and monorails. It was faster, cleaner, more efficient, and carried more and more people. Rail companies realized that it was cost-effective, too, and helped the economy: to this day, many tax dollars go to improving our roadways and public transit systems.

Related :  Start eating just 1 cucumber a day, see what happens to your body

12. How much gas does it take to fill a school bus?
School buses can hold between 60 and 100 gallons of diesel fuel. Due to the efficiency of diesel, school buses are responsible for the least amount of carbon emissions from vehicles currently on the road. This also means that students and teachers riding the buses aren’t breathing in harmful fuels or gasses, keeping everyone safe and healthy.

13. Are there any bus-related world records?
In fact, there are a few! But by far, the most extraordinary was completed by Abeesh P. Dominic, who pulled a 10-ton bus 164. 04 feet—with his teeth! Dominic pulled off this incredible feat of strength in India on April 28, 2015. Not surprisingly, no one has broken this unbelievable record since!

Dominic has other athletic, record-breaking achievements under his belt as well—such as breaking open 136 coconuts with his bare hands in 60 seconds. There’s also Bubba Blackwell, who holds the world record for flying over 15 buses on his motorcycle in 1999, beating the previous record of 14 held by the stunt king, Evil Knievel in 1975.

14. Where did the song “The Wheels on the Bus” come from?
Did you sing this one as a kid? The original composer of the song is unknown, but it was possibly written by a woman named Verna Hills. Published in 1939, the lyrics are a little different everywhere, It’s still sung in the U.S., U.K., Canada, and Australia today! This nursery rhyme was mostly used as a way to keep children entertained on long road trips. If you pay close attention, it has the same melody as “Here We Go ‘Round the Mulberry Bush!” Hmm, do we have a copyright violation here?.