Why Car Windows Have Little Black Dots – Every now and then, you get stuck in traffic. So what do you do? You stare blankly at your windshield, right. And you probably notice the little black dots around the edges. Ever wondered what those are for? And what about the black lines going across the back window? Well, here’s your answer!

The dots come out of the black band that goes around the window. That band is called the frit. Now it’s nothing to “frit” about — It’s the ceramic paint that protects the sealant holding your windshield in place. Without the frit, the sun’s rays would eventually ruin that adhesive, and the windshield would just pop out.

Also, that glue doesn’t look too good on the window so the frit is there to cover it up. As for the black dots themselves… First, they serve an aesthetic function. They make a nice gradient transition from the black frit to the clear window. This gradient is also a safety feature. Normally, the black dots are arranged in a “halftone” pattern. They get smaller and more spaced out the further they get from the edge of the windshield.

This way, the transition from black to clear is almost unnoticeable for your eyes. And that’s important since you don’t need any distractions while driving! Their second purpose is temperature control. To give the windshield its bent shape, it’s heated up in an oven. The black part naturally gets warmer faster than the clear part. 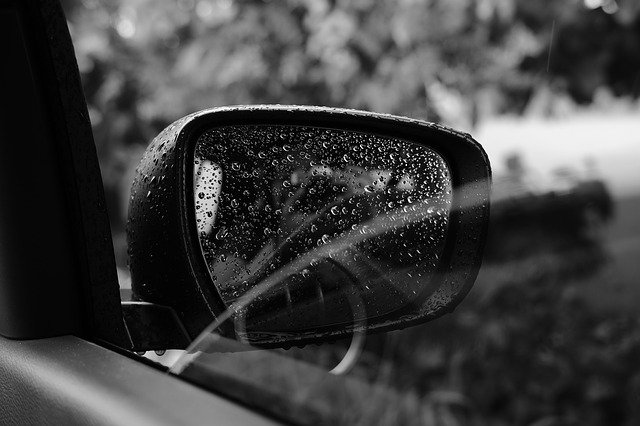 So, the black dots are there to even out the heat and minimize optical distortion. Without them, the windshield would deform. Those black dots above the rear view mirror have another important function: they help protect your eyes from the sun while you’re driving. You can put both the driver and passenger visors down, but there will still be a gap between them where the rearview mirror hangs.

Hence, the boat-shaped cluster of black dots there. Black dots aren’t the only part of your car that might have you wondering, “What on Earth is that for?” Let’s reveal some more secrets! Stick around till the end for a helpful bonus tip, and if I miss anything on this list, leave your car questions or ideas down in the comments!

– The AS Line
Since you’re still looking at your windshield, did you notice that little line with an arrow pointing down and AS1 written on it? You haven’t? Well go look at it, I’ll wait… okay well check it out later. It’s the Approved Safety code for the glass. AS1 means that the glass should let in no less than 75% of the light.

The line and arrow mean “from this point and downward”. So, you can tint anything above it but nothing below it. This code is strictly for windshields. If you look at your side windows, you’ll notice a little AS2 symbol, that means the glass must let in at least 70% of the light. If you see AS3, it’s rare and it means the light transmittance can be below 70%. So, you can tint that window quite a bit if you want.

– Lines on the Rear Window
If you live in a part of the world with seasonal weather, you must be familiar with snow and ice. They’re every driver’s worst nightmare during the winter months. Fortunately, you have a helper with you on your scraping and de-icing mission, the thin black lines on your back window. Cars vary from model to model, but most have this feature as part of the defrosting system.

Small currents run through those lines to heat the glass a bit and melt the snow and ice or get rid of any foggy condensation. By the way, your front windshield also needs protection from snow, ice, and fog. You obviously can’t have black lines blocking your view, so that’s why there are air vents on the dashboard to blast it with hot air.

– The Snowflake Light
Have you ever noticed a little snowflake light up on your dashboard? This is the Frost or Freeze Warning, and it lights up automatically to inform you that the temperature outside has dropped so much that the roads are likely to freeze. When the snow flake is yellow, the temperature is getting close to freezing, probably around 40°F.

Related :  Why Space Shuttles Take Off Only Vertically

When it’s red, it’s at or below freezing. Don’t confuse this snowflake with the Winter Mode indicator though. It normally also looks like a snowflake or just a W. It turns on and off when you push a button to make your car move in second or third gear. It prevents your tires from spinning and slipping when you’re driving on icy roads.

– Gas Tank Locator
If you’ve ever borrowed a car from someone or rented a vehicle, you’ve probably been in this situation. You pull up to a gas pump only to realize you have no idea what side the tank is on! Next time, instead of getting out to check (and will you look at that – you guessed wrong so now you gotta circle around to a different pump!), check this indicator on the dashboard first!

It’s the little gas pump with an arrow pointing to the left or right. Yep, it’s telling you which side the tank is on! By the way, there are no strict regulations as to which side the tank should be on, only where it should be in the car. One guess is that manufacturers place it on different sides of the car to save us all some time. Otherwise, lines at gas stations would be way longer!

– Drowsiness Detector
It does exactly what it says: if the car “feels” that you’ve been on the road for too long or you keep slowly drifting out of your lane, then this indicator will come on. It’s usually a little icon of a cup of coffee, and it means you need a break, so get off the road! This is a recent development, so not many cars have it yet. But in the near future, cars will likely also come with driver heart rate, breathing, and even eye movement monitoring systems to prevent you from dozing off on the road.

– Stability Control
When sensors decide your vehicle is about to spin out or isn’t turning far enough, a little skidding car icon lights up on the dashboard. Stability control, as you can guess from the feature’s name, helps you stay stable on the road when it’s wet or icy. Don’t turn it off unless you’re stuck in deep snow. At all other times, it’s a real life saver.

– Ceiling Handles
Everyone knows there are handles above each of the doors in any car. They come in handy when you need something to hold onto in case the ride gets too crazy, or the road starts getting too twisty-turny. You might’ve also seen people hanging fresh dry-cleaning or any clothes on them. But perhaps you didn’t know that the original purpose of these handles was to help you get in and out of the car. A must-have for bigger vehicles, right?

– Conversation Mirror
In most mini-vans and some crossover SUVs, you can pull down a convex mirror from a special compartment in front of your rear view mirror. Why do you need a second mirror over your head? It helps you keep an eye on the kids, pets, or just passengers in the back seats without taking your eyes off the road for a second longer than needed.

– Fully Customizable Icons
There are some indicators you just need to have on your dashboard, like your speed, gas, and emergency warnings. As for any extras you find useful and want to have easy access to, many new car models give you the luxury of choice of what’s gonna be on your vehicle’s console! You can also make a digital map out of it or get quick access to your favorite music!

– Find extra storage spaces in your car!
This tip will be more or less useful depending on the car, but see if you can find any of these storage spaces in your ride! It could be a little pop-out compartment near your rear-view mirror that’s just perfect for your cell phone or shades. Some cars have a secret hiding spot behind the climate control panel. You can also try checking under the passenger seat or behind the front row if you have across over. Chances are there are easy-to-remove bins so that you can drop whatever you want in there, take them out, and clean them afterward.