Why Cruise Ships Are So Slow – So you’re having a race between a plane, a car, and a ship. Now whoever decides to place their big bet on the ship would have a bad day. Loser! And this is despite the fact that ships have the most powerful engines! But why? We’re going to find out right now. Ships come in all shapes and sizes.

From motorized dinghies to yachts; from glorious looking white cruise ships to grim and bulky container ships and tankers. But they all share one quality: their engines seem excessively powerful, yet they still can’t seem to output the speed you would’ve expected from this kind of power. The reality is the exact opposite of the expectations: a big liner can cross the Atlantic Ocean in a week, but a cargo ship would have to spend more than two weeks to do the same thing.

For a plane to go from an airport in Western Europe to New York, for example, it would take only 8 hours. Some people might ask why we even use ships if planes are so much faster. Well, here’s the catch: you won’t be able to carry thousands of tons of weight by plane. The same goes for the number of passengers – some ships can carry more than 5,000 passengers in one go! Try to fit that crowd in an airliner.

Hey we can duct tape ‘em to the wings! As a further illustration, let’s take a look at the supermassive ore carriers like Valemax – she’s a 1,188 ft long monstrosity that can carry 400,000 tons of metal ore dead weight. That’s more than the weight of the entire Empire State Building! Yet the ship will only go 17 mph, or 15 knots as mariners would call it. 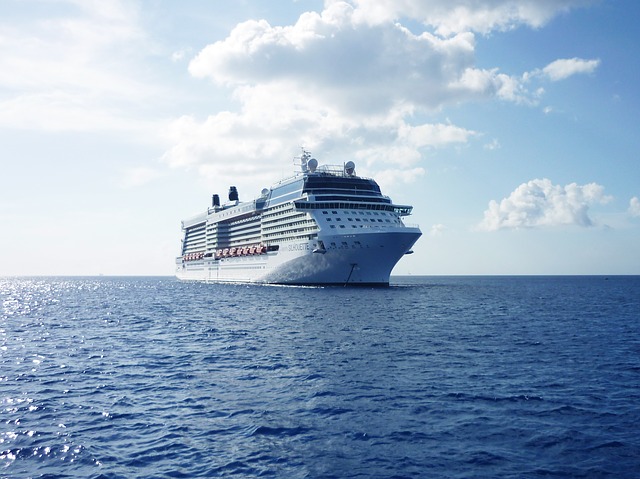 That’s not even as fast as the running speed of an Olympic track athlete. So in general, ships are going slow just because they don’t need to go faster; their aim is set somewhere else completely. They sacrifice speed for better carrying capacity. Cars and planes may be faster, but even with half of a cruise or cargo ship’s regular burden, cars wouldn’t even move, and the plane wouldn’t be able to leave the ground.

The engines of big ships are huge powerhouses taking up entire rooms and swallowing tons of fuel each day like it’s a snack. ‘Emma Mærsk’ – the biggest cargo ship in the world, capable of carrying up to 12,00020 ft metal containers, has an engine that weighs 2,300 tons. When installed in the lower part of the ship, it takes a three-story construction built around it for the crew to be able to provide maintenance.

It’s capable of producing more than 100,000 horsepower output of engine power. Transferred to an energy value, that would be more than enough to power up a small city. “Uh, engine room, yeah we got some bad news. We need to step it up down there, the captain wants to go water skiing”. This example may sound extreme, but it shows just how much more powerful big ships are compared to cars or even planes.

In contrast, ships have much more trouble moving at all. When a plane flies, it needs to maintain enough speed to stay up in the air, and it needs to avoid clouds when possible. You’ve probably experienced this nerve-racking moment for yourself: when a plane goes through clouds it shakes quite a bit.

This is because clouds are denser than air, causing friction with the plane when it collides with the water vapor the clouds are made of. Unfortunately, ships have no choice but to deal with the dense environment that often almost fully covers the ship’s hull. Water produces huge friction, slowing down any movement significantly.

Even something as fast as a bullet would slow down and finally stop after just 100ft through the water. This is why every ship needs more power to move at all. But brute force isn’t the only way ships deal with the friction problem. Another big deal is the necessity to minimize the area where the ship comes in direct contact with the water. And here come two big problems.

It probably already occurred to you that not all ships are huge liners, and some other ships can actually be quite fast. Yes, and those fast vessels are smaller. They go faster because they weigh less and can glide right on the surface of the water using the thrust of their engines. Another trick smaller boats use is splitting the hull into two parts. These boats and yachts are called catamarans.

Their buoyancy isn’t as good as that of a single-hull vessel, but they greatly reduce the need to touch the water with their smart design. Getting back to the big stuff. A large ship is naturally submerged in the water with a part of its hull up to the waterline. But this line shows only the predicted level of water for the ship alone. If the ship is loaded with cargo, it’ll be submerged deeper than that.

And this means that it not only needs more power to move its weight, but the water will make it even slower because there’ll be more friction in play. But dealing with water is even trickier than that. When a ship moves in the water, it displaces a volume of water equal to the volume of its hull that’s submerged. This displaced water becomes waves that go to the sides of the ship.

These waves further increase the area of contact with the water and therefore increases the friction. It may not seem like a big deal, but in reality, it doesn’t only slow the ship down by as much as 40%, but also notably increases the consumption of fuel. And that’s a big deal for transport companies. Good thing there was an ingenious solution to this problem.

All modern-day ships have a so-called bulbous bow – the thing that’s submerged in the water right under the nose of the ship. These are exclusively designed for each type of ship. Depending on the size, carrying capacity, speed, and shape of the ship, the bulbousbow would also differ in size and shape. A bulbous bow is the first thing the water meets when a ship is moving.

Following its form, the water will try to make a certain type of waves, but then it will encounter the main hull and also try to produce waves of another type. When these two waves try to form at the same time, they simply can’t, because they cancel one another out completely. This is why modern ships don’t produce waves around them anymore, and their speed is no longer so heavily affected by them.

You can see for yourself – the water around modern big ships is relatively flat. If the shape of a bulbous bow is even slightly deformed, it won’t be effective at all,and waves will appear once again. But hey, if you want some speed, that doesn’t mean you have to forget about ships and boats entirely! Even cruise ships these days can be fast.

HSC Francisco is one ship just like that. It combines the size of a cruise ship, capable of carrying 1,000 passengers in luxury, and the design of a catamaran. Each side of the hull is fitted with wave-piercers to further improve the speed of the ship. And if it wasn’t already enough, it’s powered by a gas turbine engine that drives two water-jets.

These jets shoot powerful streams of water and propel the ship forward. Each jet stream shoots 6,300 gallons of water every second and provides enough thrust to speed the ship up to an unbelievable 58 knots, or 67 mph. For such a huge vessel, this speed is almost unheard of. And that’s not the fastest you can go on the water of course.

WP-18 Special Forces Interceptor is a boat you’d expect to see in a sci-fi movie. But it’s real, and it’s literally cutting edge design is specially developed to cut through waves at the extremely high speed of 65 knots, or 74 mph. The main purpose of this vessel is, as you can guess, to intercept ships that are trying to escape.

Like, for example, pirates or other criminals. And let’s just say, it’s not even worth trying to shake this speed demon from your trail. A rush for top speeds was, and always will be, in people’s minds no matter what. This gave birth to another incredible vessel – The Mystic Powerboats C5000. A 50ft long catamaran boat that’s so fast, it needed a cockpit to protect the driver.

The max speed achieved in this boat is mind-blowing 250 mph. If you want to go even faster, I have bad news for you: the sea won’t let you, because it won’t be calm enough. Speeds higher than that would be too dangerous. For a boat that goes this fast, the waves would be as hard as concrete. Going into one of them would launch the boat into the air like a trampoline and the next wave would simply crush it. So it seems like about 300 mph is the natural speed limit of the sea itself.