Why No One Can Bring Liquids on a Plane – Hey, you ever been held up in airport security because some knucklehead broke probably every liquid rule there is?. Going through security is hard enough, what with taking off your shoes, emptying your pockets, pulling your laptop or tablet out of your bag. So why on Earth have they come up with this ridiculous liquid thing to slow us all down when you hear those dreaded words: “Excuse me, can you step aside and open your bag?”.

Listen, I get it. Corkscrews and scissors might not be anything special, but they are sharp and pokey, so I can understand why you’re not allowed to travel with such items in your carry-on. Who knows?. Maybe they could hurt someone if your bag is up in the overhead locker and your neigh boris trying to push their bag in next to yours. …Or, ya know, when the person behind you keeps pushing your seat with their knees and you’ve had just about enough. 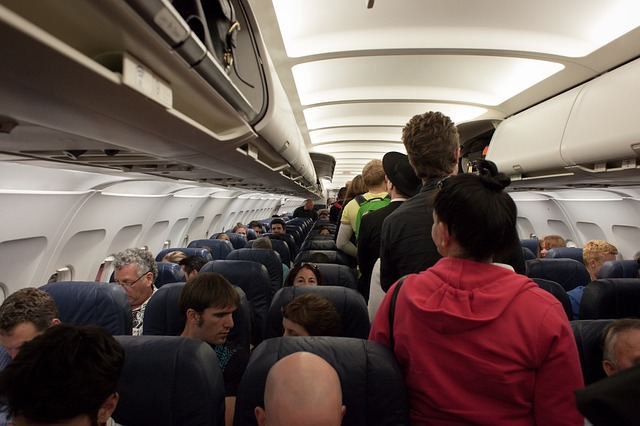 Hey, I’m kidding!. But what’s so dangerous about a bottle of water or your favorite perfume or cologne?. Does it have something to do with the pressure in the cabin?. Can my liquids somehow mess with the plane’s navigational system?. That’s why they ask you to put your cellphone on airplane mode – maybe the two are related?. It’s got something to do with liquids specifically being within your reach because you can pack as many as you want in your checked luggage.

Well, I’m sure you know by now that it all comes down to security. Yes, we’re living in a different time, and believe it or not, there have been cases of bad guys making explosive stuff with water bottles and even tubes of toothpaste!. And, thus, the rules on “liquids, aerosols, and gels”  were adopted. Many argue that it’s not the best fix since bad people can do bad things even if they only have a tiny amount, but, hey, restricting liquids is the fix for now until they think of something else.

What’s surprising is that there’s no single document on these aviation security standards that gets used by all airlines in the world. But there are some organizations involved in the maintenance of airplane safety. For example, the International Civil Aviation Organization  regulates everything related to flights, from aircraft design down to the rules of transporting batteries.

The ICAO issues lengthy documents with standards that all member countries must comply with as well as some recommendations to follow. They sometimes even send auditors to check if partner countries are abiding by the norms. But airports and airlines can even have their own rules. For example, in 2016, many of them banned flying with the faulty Samsung Galaxy Note 7, which, if you remember, tended to explode on airplanes.

They made that call without waiting for an official ban from the authorities. But the lists of things that can and can’t be in your checked and carry-on luggage are the same no matter where you go. So, before you head out on your next flight, here are some things to keep in mind!In general, your carry-on luggage can have liquids, gels, and aerosols in containers that hold no more than 3. 4 oz.

That is, you can’t take a whole bottle of shampoo, but you can divide it all up into smaller containers. (Although, not really, but I’ll get into that here in a bit!). You’re also not allowed to take a whole 12-oz bottle even if it’s mostly empty and there’s only a little shampoo left at the bottom. Nope, you still need to get a travel-size of the product or squeeze what’s left of that bottle into a travel-safe one.

Now, if you’re like me and thinking, “Ok, if I’m only allowed tiny bottles, then I’ll just take a whole BUNCH with me!”– I’ve made that mistake, so here’s my warning to you. All these 3. 4-oz containers must fit into a single, transparent, re-seal able plastic bag. And before you grab the biggest Ziploc bag you’ve got, remember that your liquids bag should also be no bigger than quart-sized.

That’s about 8 x 8 inches, give or take. So, yeah, ya still must limit your tiny bottles…It should also be able to close, so don’t even think about stuffing it full so that,technically, everything’s in there even if the thing doesn’t zip shut!. (Again, just talking from personal experience here!). If you’re traveling with friends or family, you should also remember that all these rules apply for each passenger.

And don’t assume that liquids are just about drinks. Toothpaste, sunscreen, deodorant, liquid or gel makeup  – these are just the toiletries that must abide by the rules. If you’re packing a snack for a long flight, yogurt, butter, soft cheeses – they count too. Finally, here’s a pro-tip: they’re gonna ask you to take that liquids bag out and put it in its own tub to go through the scanner.

While you’re standing in line, go ahead and get it out and ready to put in a tub instead of fumbling around once it’s your turn to put all your things on the conveyer belt. Trust me, you’ll get fewer sighs and eye-rolls from the folks behind ya!. And, of course, there are some exceptions to this strict liquids rule. Anything to do with food for kids, you can take as much as a small child  will need during the flight.

Also, if you use any medications, you should provide proof from your doctor indicating the total amount you’ll need during the flight. Otherwise, unfortunately, some airlines may ask you to leave them in your checked luggage. Oh yeah, and if you’re ever unsure about a certain item, you can always check the airport security’s website, like the TSA or similar authority in your country. But for now, you’ve got all the basics.

So let’s talk about what happens if you forget to abide by the liquids rule. Uh-oh, cue the horror music, actually, it’s not that bad. Inconvenient, sure, but not the end of the world…- First off, if prohibited items were found in your bag before you check in, you can either give them to those who accompanied you to the airport or put them in your car if it’ll be waiting for you out in the parking lot.

Of course, I’m talking about things that can’t even be kept in your checked luggage. You can also hand them over to the airport, and they’ll keep your stuff safe until you can get it back. If none of those options are available, check if the airport has a mail service so that you can send any items prohibited for travel to your friends or family.

Now, if the prohibited items are found in your suitcase after you’ve already checked in, in most cases you’ll be told to go back to the registration desk, pick the item up,and choose any of those options I just mentioned. Otherwise, the thing is going to be confiscated. Hey, it sounds scarier than it is, so no worries!You’ll probably get it on the way back.

Related :  What Happens To Your Online Life When You Die?

In any case, if the thing is supposed to be confiscated but it’s near and dear to you, like, for example, your grand pappy’s old pocketknife, explain this to the security personnel. Most likely, there is a way to save it. – Finally, if any prohibited items were found in your carry-on luggage and you can still return to the check-in desk, then just put them in your checked luggage if you can.

If you can’t do that, then the thing will probably be confiscated. Again, not a big deal if you handle this situation the right way. On that note, items that have been seized are stored at the airport until the owner’s return. Just make sure that the thing wasn’t simply confiscated forever but that you get some sort of documentation of it giving you the right to get this thing back. Of course, I’m talking about legal and generally harmless stuff.

For example, let’s say they find an expensive cream that you’re not ready to part within your carry-on while you’re going through security. If you don’t have the option to put it in your checked luggage, leave it in the storage room at the airport, get all the necessary papers and documented proof, and just pickit up when you come back.

Sure, it’ll be a shame that you can’t use this awesome cream while you’re away,but, hey, it’s better than tossing it in the trash!I’d still say it’s better to avoid all that mess in the first place and just stay in the know about what you can and can’t transport while traveling. After all, airports are stressful enough, so why make it even harder on yourself and risk losing your precious things?.

You should be excited about traveling, not full of dread about all the security rules and restrictions. Hopefully these tips will help you on your next trip. Bon voyage!. So, do you think airport security is too strict?. Let me know down in the comments.