Why Passenger Planes Don’t Land in Fog – As we know, driving in fog can be a terrifying experience, but what about landing a plane in foggy weather?! How do airplanes land with no visibility, while hundreds of flights get cancelled for the same reason? Well folks, it’s time to clear the air about this mystery.

First, have you ever been on an airplane that landed in fog? Leave a comment below and let me know your experience. Okay, here’s the deal. Back when airplanes first made an appearance, they could only fly during the day, and only if the weather was good. Pilots had to rely on their own eyes to bring the aircraft down safely.

But technology has served us well over the years, and autopilot can just take over…well, sometimes. When planes are ready to land, they first check the forecast. Pilots dial a specific frequency in order to listen to the current weather conditions. And one of the keywords they’re listening for when it’s cloudy is ceilings. 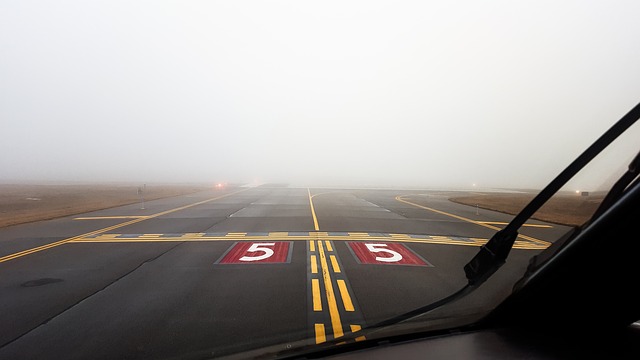 A ceiling is the bottom of the lowest layer of clouds above the ground. If there are patches of clouds when aircraft are about to land, it’s safe. But, if there are thick clouds that are too close to the earth, then there’s a slight problem. One way to calculate ceilings is by a Cloud Height Indicator.

It’s a device that shoots lasers up to the sky to measure both the height of the cloud and how far away it is. Most Indicators are limited to 12,000 feet in altitude, but scientists are working on doubling that number shortly. Clouds are reported by weather stations in feet above ground level , or AGL. When pilots take off, they always make sure to know the height of the clouds around them.

That way, they can adjust their altitude in order to separate from them. Let’s assume that a random aircraft is ready to land, but the weather isn’t on their side. The clouds are below the basic Visual Flight Rules of a 3,000 ft ceiling, and the pilots only have a 5-mile visibility. In order to land the plane safely in these conditions, three things are necessary.

A qualified airfield for the plane to touch down on, navigational tools in the aircraft,and most importantly, trained pilots. Let’s start with the first one. The airfield. As you understand from the context, it’s a spacious area where the plane can land. When a commercial jet is performing a touchdown with less than minimum visibility, the airport needs to have specialized equipment to guide the plane.

Advertisement
Related :  What is the Smallest Thing in the World

For example, they need radio direction indicators, which will help the pilots understand their position and the direction they’re going. It works like GPS. Imagine you’re walking to a place you’ve never been to before. You add the zip code on Google maps, and the arrows guide you while you’re moving towards it.

Then, specific lighting is needed, which will highlight the runway for the pilots. Finally, they need visibility measurement gear that calculates the visual rate of the runway. In foggy conditions, air traffic controllers are in constant communication with the pilots. They become their virtual eyes.

They can locate them through the radar and guide them towards the landing runway. Aircraft today use cool radio navigation called the Instrument Landing System. It’s used by the pilots to tune in to a frequency at the runway where they’re landing,and it shows up on several devices in the cockpit.

The Instrument Landing System contains a localizer that lets the pilot know if they’re on the left or the right side of the runway. The localizer is an antenna positioned outside the departure end of the runway, and it comes in multiple pairs. Next time you’re at the airport, look for the large red structures at the end of the taxiway, those are the localizers.

The Instrument Landing System also includes a glide slope, which shows the vertical navigation as the plane heads to the airport. The pilot controls the plane in such a way that the glide slope needle stays in the middle of the screen while landing. This happens to ensure that the plane is following the correct glide path.

Therefore, the plane can avoid obstructions and get to the runway at the correct touchdown point. But the question remains. How does fog cause delays when there are ways to work around it? Well, it’s for safety. When planes need to land in minimum visibility, the ground poses the biggest problem. The advanced gear that modern jets are equipped with can ensure that the plane will land securely, but even the best pilots need to be able to see clearly through their windshield in order to steer the plane.

Related :  This Super Volcano Has Scientists Freaking Out

And unfortunately, not all airports are equipped with the Instrument Landing System. So, if there’s thick mist around an airport that lacks this technology, flights will either be delayed until it disappears, or cancelled. The reason for this is money. It’s too expensive for small airports to install the radio navigation systems, so they just put up with the disruptions.

Larger airports, and most commercial Aircraft, however, have all the means to land in fog. And even though they’re able to do so easily, the pilots would rather not perform an automatic landing in those conditions. For starters, the autopilot can be a nuisance. It’s basically a whole load of computers that communicate with each other through information and orders. Yack, yack, yack.

Even the slightest mistake can result in a catastrophe, especially during landing. So, it takes a lot of preparation, which is time consuming From the airport’s point of view, the limited visibility that comes with this weather slows everything down. The number of planes that take-off and land every hour reduces for safety.

The Aircraft are spaced further apart during take-off, taxiing, and landing, in order to avoid collisions. And what most people forget in those situations, is that when there’s thick fog around the airport, there’s a chance it’ll be all over the surrounding areas, which will cause traffic on the roads. Both passengers and crew members might arrive late at the airport.

On a clear day, pilots can look out the windshield and proudly take control of the aircraft in case something happens. But without visibility, they rely solely on the orders of their computers. If something goes wrong, and they’re unable to follow the computers’ commands, then they’ll need to climb away.

Before a plane starts to approach the runway in fog, the pilots need to ensure that all their primary systems are working correctly. Then they check the backup systems. After that, they go through a thorough briefing of what they’ll do if any part of the system fails. Once the plane is all set-up and ready, the autopilot gets engaged, and the landing begins.

The foggy touchdown process is similar to other approaches when it comes to landing. The pilots begin to reduce speed, then they lower the flaps, and finally the landing gear. During that time, they check their screens and the ILS system to control the direction and the altitude at which they’re flying.

But there’s a tricky part in that process – The flaps. During the landing, an airplane has 4 to 5 stages of flap lowering, and they need to be done at very precise speeds. If the pilot lowers them too fast, the flaps will be damaged. If he flies too slow before moving on to the next step, the airplane might stall.

So, the pilots are in control of the flaps and the speed of the aircraft to make sure they land safely and smoothly. Right before the plane moves on to the final approach, the landing gear is lowered. During the foggy landing, pilots need to continually give the jet orders through a separate computer the flight management system.

Since they have no visual of what’s going on outside, they’re prepared to take over if anything looks dodgy in their computers. At around 1,000 feet  which is approximately 1 minute before landing, and 3 miles away, the pilots re-check everything before they continue with the touchdown. If they choose to proceed, both will keep an eye on the engine parameters and flight path.

One of the pilots will keep their hands on the controls, ready to take over. The last seconds are the most important ones. The autopilot will have to reduce the rate of descent, and the system will have to notify the pilots that it’s keeping the aircraft straight on the runway. If a problem occurs, they’ll have to go around, find out what the problem was, correct it, and approach again.

Once the plane has touched the ground, it’s still travelling at approximately 100 mph,so the pilots need to reverse thrust and brake in order to slow it down. The hardest task is to find the taxiway and guide the plane towards the terminal building. If there’s no visibility, an airport “Follow-me-truck” with flashing lights will be ahead of the plane, guiding it to the correct path.

In modern jets, IRL systems rarely fail. But sometimes passengers can tell the difference between a manual landing and an automatic landing. So next time you travel, keep an eye out and see if you’re able to tell which one it is. Me? I haven’t the foggiest.