Why Phone Should Be Allowed In School – Is your school considering a ban on cellphones? Don’t let it happen! Your hands will get twitchy. What are you going to look at and listen to all day? The teacher? No way! Rather than get upset, why not launch your first campaign? “Save the cellphone!” Who knows, you may become a leader.

Today, the school – tomorrow, the world! Start by gathering convincing reasons to keep cellphones in school. Even if yours has already banned phones, you can try the following:

First: Convince Your Parents or Guardians. They’re your best allies. Here are just a few points that might persuade the people who love you most to let you keep that phone where it belongs: with you at school! Having a cellphone in school will improve your grades! Some students ride the bus for hours. Hours that could be spent getting an early start on your homework.

It’s hard enough finishing all those assignments before bedtime while juggling your other responsibilities– taking the dog for a walk, extra-curricular activities, chores. It’s tough being a kid! Using a cellphone, you can turn homework in at the last minute. You won’t always do that, but tell your parents you want to be graded on what you turn in, not when you submit it.

You can practice reading and writing as it’ll be in the future. The methods you learn in school should remain applicable in 20 years when, instead of writing cursive or hauling around heavy books, we’ll be typing book reports and reading online. Wait, aren’t we already there? Exactly! 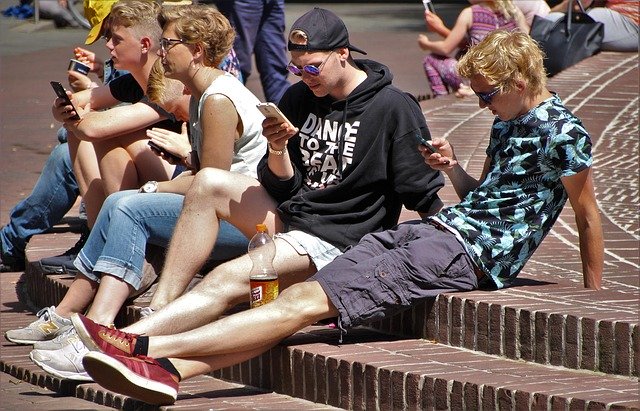 Also, when you leave your cell at home…. Mom sometimes mistakes it for her cellphone and takes it to work. So, she misses messages from her clients all day and instead gets texts from your friend, Emma. Karen breaking up with Jake is pretty major news, but Mom’s a tad bit more concerned about staying in touch with her business contacts… And your phone gets lonely.

Like a kitten that needs to be petted or a puppy longing to play, your cellphone yearns for attention. It breaks your heart to think of it sitting all alone on the shelf. Vibrating into the void… Ok, maybe not that one. But if you had your phone… Dad could text you when he’s going to be late picking you up.

Which is, like, always. With a cellphone, instead of waiting in the rain, you could study in the nice, dry library! Remind your parents how overprotective you are – if you know when to expect Dad, you won’t worry so much! Also! You can text Dad if the baseball game you’re playing runs into over-time and extra innings.

He might still be able to make it!! You can let Mom know that the lead in the play got sick, so you and the rest of the cast are being let out of rehearsal early. Winning campaigns are inclusive. Ask your parents if they have any ideas they’d like to contribute.

Next, Convince Your Teachers: using everything you told your parents plus… Auditory and visual learners can benefit from recording the class on their cellphone. Ask your teacher before you film them. For that matter, ask anyone before you take pictures or videos of them! But there’s no denying that some kids retain more information by listening to a recording than reading notes.

When a student needs individual help, the rest of the class can watch educational videos. You won’t pass any more notes in class because you’ll be texting! Wait, scratch that…

Next up: Convince the Administration by sharing some of the above, along with the following arguments…Having cellphones at school increases student vocabularies by helping them learn cool words like “deterrent”!. The whole student body will excel in national exams! Your administration is now officially on board.

And phones can help students get out of a jam. Like that time a substitute teacher had your whole class play “hide and seek,” and Jayden hid in the music room closet. Jayden won the game; no one found him. But Jayden couldn’t collect his prize because the door to the closet got jammed!

Related :  Scariest Things That Can Come Out Of Your Toilet

Then, the band started practicing! Jayden yelled and pounded on the door, but—even though the whole class was looking for him—no one heard him over the drums and tubas! Luckily, Jayden had his cell! Instead of panicking, he calmly texted his friends and shared his location.

Good thing too! Band practice lasts 45 minutes, but when you’re stuck listening to it through a jammed door, it feels like an eternity! Believe me, if the administration has heard the school band, they feel Jayden’s pain! Besides that, you can text each other about when the superintendent is coming down the hall and coordinate a surprise party!

I think they’ll like that! Who’s bringing the cake?! The biggest reason you’ll give the administration is that, no matter what the rule is, some kids are going to bring cellphones to school anyway. And some parents—for safety and convenience—will insist that they do.

Why turn everyone into a bad guy and waste the teacher’s time if they have to constantly try to catch students with phones when, instead, you could have a set of reasonable guidelines the whole school understands? Just don’t volunteer your parents to be on the cellular rule-writing committee without asking them first—they might get mad and confiscate your phone! Your campaign is going great! But you’re not done yet…

Last but not least: Convince Your Fellow Students. I know, most of them are probably already on board because, obviously. But you want to make sure they’re fired up! You can’t win this fight alone. You need your friends campaigning with you, so remind them what’s at stake: Amy can talk to Kim at lunch, even though Kim’s homesick that day.

It’s nice for Kim, she’s lonely. It’s also good for Amy. Kim’s her best friend, and Kim’s empty chair makes Amy sad. A cellphone will fix that! Shondra can have music at recess and organize a dance party! Then Shondra can lend her dance-mix to the gym teacher when the school’s sound system fails. Brett can use it to talk to his imaginary friend.

Wait, do imaginary friends use imaginary cellphones? If so, what are the monthly fees? Speaking of fees …Every day, Johnny asks Ryan to “loan” him his lunch money. Johnny never pays Ryan back. In fact, he doesn’t even really ask…he just kinda takes Ryan’s lunch money. Johnny, that’s rude! But he doesn’t care, and Ryan feels like telling the teacher would be useless.

You know why? Because Johnny’s one of those guys that always gets away with it. He can turn on the charm. Or the tears. Johnny can convince any adult that … he’s innocent! But the next day, Johnny wants money again. What can Ryan or any witnesses do? Record the whole thing on a cellphone! You know, to help Johnny “remember”.

With the camera rolling, there’s a good chance Johnny won’t want Ryan’s money after all! In this case, Ryan’s cellphone is not just a record-keeper, it’s a deterrent! After that, if the mystery meat in the cafeteria scares Ryan—he can use his phone to order in! And what about poor Reese? He broke his arm, and now he can’t climb at recess! And climbing is his favorite thing.

Recess was once the one part of the day he looked forward to the most, but it’s now just 30 minutes of boredom and disappointment. With a cellphone, Reese could play games with his good hand instead of staring at the jungle gym and…well, you get it. Just like Reese, you can watch a funny video to cheer you up when you’re having a bad day!

And… You won’t get caught passing any more notes in class because you’ll be texting! Be sure to ask your classmates for their ideas and add your own reasons in the comments below! By the way, about that word “deterrent”? Funny, I thought that was what we used to clean laundry. – Why Phone Should Be Allowed In School