Why Pilots Say “Mayday” And “Panpan” – Most of you have probably seen this movie before. Over and over again in fact. Something has just gone wrong with the airplane or spaceship, and it’s spiraling out of control. Right before it touches down, stranding the main characters on a desert island, alien planet, or whatever hostile environment they’ll have to survive, the pilot yells “mayday,mayday!” over the radio.

So I’m wondering about this MayDay thing. Why does this situation always happen on May 1st? Isn’t that a bit odd? Is there a conspiracy we don’t know about? Well, “Mayday” is actually one of the few pieces of pilot shorthand most people are familiar with; but have you ever wondered what it means? What exactly are pilots telling each other when they say “mayday” and other code words?

Based on how it’s used in film, you might think pilots say “mayday” in any emergency. On the other hand, you could just as easily believe it’s only uttered when the plane is about to crash. Neither of these are strictly true, although you’re still on the right track… or, I guess… flight plan? Anyway, “mayday” and other words like it are known as procedure words or pro words. 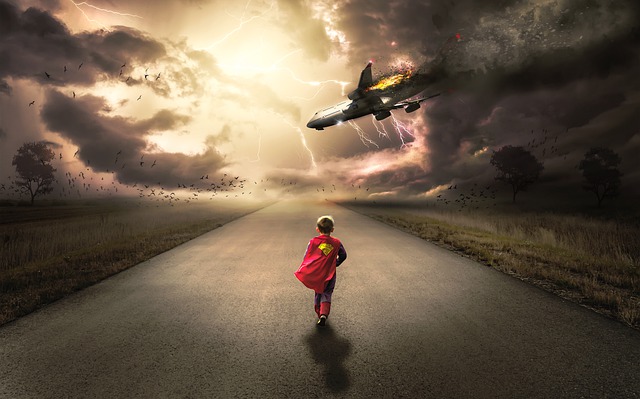 These phrases are used to convey information quickly over the radio, which is essential when there’s an emergency at thirty thousand feet. “Mayday” specifically, falls under the category of “distress and rescue passwords. ““Mayday” is the spoken equivalent of SOS, and is the most urgent kind of distress call.

It’s only used when a life-threating emergency occurs on a boat or aircraft. If a plane loses an engine, or something catches fire, the crew and air controllers are going to want to address that problem immediately. Other situations where “mayday” would be used include things like medical emergencies, damage to the fuselage, the cabin becoming depressurized, or a malfunction in one of the aircraft’s critical electronics.

Basically, it covers anything that would require an emergency landing or the deployment of emergency services, such as ambulance or fire crews. When such an emergency occurs, the pilot or captain will say “mayday,” not once, not twice,but three times over the radio, followed by more information. This repetition is important in making sure the call is heard clearly.

Related :  $1 dollar street food you can try in different countries

Doing so also helps to differentiate an actual mayday call from a conversation about a mayday call. In some cases, pilots might instead say that they’re “declaring an emergency. ”This phrase has the same meaning as “mayday” but is discouraged by groups such as the International Civil Aviation Organization.

The ICAO notes that people often react with less urgency when the word “mayday” goes unused. For that reason, they encourage pilots to stick to the officially recognized pro words. The call is followed by a message that contains all the information responders might need. The specific format varies depending on whether it’s a boat or aircraft calling for help, but an aircraft’s mayday call and message will sound something like this, “Mayday, Mayday, Mayday, Example Air Flight One-Eleven, we are out of tacos, the passengers are complaining very loudly.

”Obviously, a taco shortage wouldn’t qualify as a real emergency, but that gives you an idea of the basic format. Can you even get tacos on a plane? That would certainly make up for the layover in Albuquerque. What were the best and worst flights you’ve ever been on?Let me know down in the comments.

Hopefully, any emergencies were on the taco level. Incidentally, if you happen to have a pilot’s license and think a taco call sounds like a funny prank, maybe keep it off the air waves. Emergency calls are serious business, and regulatory agencies like the FAA don’t take kindly to their misuse. Ignore that warning, and you might find yourself on the wrong end of a two hundred and fifty thousand dollar fine! Then you’ll really be in distress.

Usually, this means the aircraft is still able to fly, but that it might be unsafe to continue doing so. A good example is what happened to Cyprus Airways Flight 303 on October 12, 2018. The Airbus 319 was passing over Greece when the pilots noticed a crack in the windshield. This seems like a small problem until you remember the difference in air pressure between the inside and outside of an aircraft in flight.

Not wanting to risk a small problem growing much bigger, the pilots descended to twenty-three thousand feet before making an emergency landing in Athens. The situation wasn’t exactly an emergency, but could’ve become one if the crew and air traffic controllers hadn’t responded appropriately.

“Pan-pan” is also used when someone aboard has a medical problem that the captain doesn’t consider an emergency. In this case, they’ll be patched through to a medical professional that will advise the flight crew on how to proceed. If the doctor decides it’s an emergency, after all, the call will be upgraded to a “mayday”, and the plane will make an emergency landing at the nearest airport.

British pilots once used the call “pan-pan medico” to denote this kind of emergency, but that term has fallen out of official use. As with a mayday call, a call of “pan-pan” will involve saying the word three times beforedetailing the specific problem. And before you ask, no. Unless the passengers started a literal riot over it, running out of tacos does not warrant a “pan-pan”.

”Other distress procedure words include, but are not limited to, “sécurité,” for reporting navigation hazards, and “seelonce mayday” or “seelonce distress” for requesting a frequency be restricted to emergency communications. At this point, you might be wondering where these words come from. You might also have noticed some of these sound vaguely French, pardon my French —pronunciations.

If you have, then you’re halfway to the answer. The term “mayday” was introduced in 1921 by a British air traffic controller named Frederick Stanley Mockford. He had often heard French pilots use the word m’aider when in distress. That means “help me” in French but resembles the words “May” and “day. ”Mockford proposed “mayday” since it was easy for an English speaker to pronounce, while being seen as unlikely to come up in regular conversation.

Related :  What Each Noise You Hear on a Plane Mean

It also sounds a lot cooler than just saying “help me” over the radio. Sorry France. Or England? I’m honestly not sure who gets credit for this, so feel free to debate that in the comments section. While you’re down there, don’t forget to hit like and share this video with your friends. Anyway, “pan-pan” comes from the French word “panne” meaning breakdown.

“Sécurité,” means security, or safety, in French while “seelonce” was inspired by the French word for silence. That covers basically everything you need to know about “mayday” and the other emergency words, but there are plenty more in everyday use. Standard terms include words like “roger,” “wilco,” “over,” and “out”.

Most non-pilots know these words, annoying actual pilots by habitually misusing them. “Over” means that you are finished speaking and waiting for a response, while “out” means that no reply is necessary. If you said “over and out” to a real pilot or air traffic controller you would, in order, confuse them, annoy them, and make them think you don’t know what you’re doing.

Another frequent pairing is “roger” and “wilco,” At least these aren’t completely contradictory. Roger means that the previous message was understood. It can be used to indicate “yes” in some circumstances, such as receiving orders, but doesn’t automatically mean that. If you want it made clear that you’re doing as instructed, you would say “wilco,” meaning” will comply. “You wouldn’t say “roger wilco” for the same reason saying “ATM machine” is technically incorrect.

By the way, so is “Added Bonus”. Very Unique. Unintended Mistake. And one of my favorites: Foreign Import. They’re all redundant. And repetitive. But I digress. Other common prowords include phrases like “this is,” “say again” and “correction,” which are at least self-explanatory. These words and phrases are instrumental when you need to convey information quickly over the radio.

So, how about you? Now you’re ready to ace that pilot’s test right? Well… maybe just the written part. Or how about just buy a ticket?