Why Planes Shouldn’t Have Free Wi-Fi – A few years ago, boarding a commercial airliner meant cutting yourself off from the rest of the world – communications wise. Now, more and more airlines offer in flight Wi-Fi. You might be thrilled, but it turns out there are people who beg to differ. So, what’s up? Is in flight Wi-Fi a bad thing? Let’s see.

It seems like there are Wi-Fi hotspots literally everywhere these days. You can connect to the net at restaurants, banks, office buildings and, in many places, public transportation. But what about airplanes? How do they get the Internet from 35,000 feet above the ground? About ten years ago, when the first passengers got access to the web, it was exclusively thanks to satellite-based systems.

The same satellites are used for TV and weather forecasting. The plane gets the signal from the near east satellite orbiting the Earth at the moment using an antenna on top of its fuselage. The satellite then passes the information between the ground and the plane. Back then, it couldn’t cope with a lot of traffic, so the best you could do was check your e-mail that only contained text – it would take longer than the actual flight to load a picture. 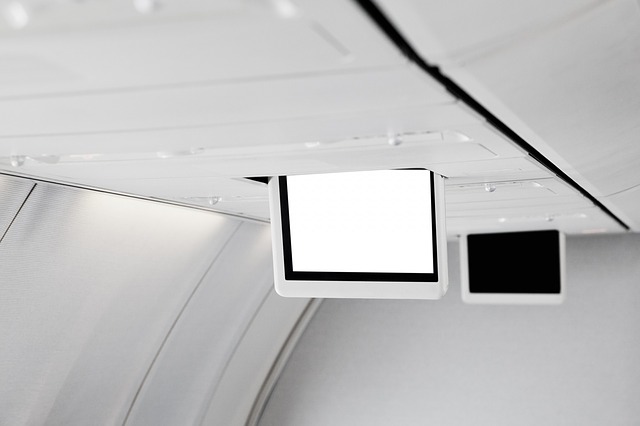 Then came the ground-based systems. They work a lot like your cell phone. There’s an antenna underneath the plane that gets a signal from the cell towers on the ground. Since the airplane is moving at a high speed, it continuously connects to whichever towers are closest to avoid interrupting the browsing.

So the whole plane basically becomes one huge hotspot, and an on-board router distributes the Wi-Fi signal to the passengers. They can not only check their e-mails, but make phone calls, browse their social media,use their favorite online apps, or even watch movies! It all happens at a regular 3G speed, just like on the ground.

The only problem with this type of connection is that it’s only possible over land, because there are obviously no towers in the water. So, the satellite systems are also still used to keep you on the grid while in the air. They’ve become way more advanced, and now run on two bandwidths: narrow band and broadband.

Still, only broadband allows passengers to stream movies; the narrower options aren’t powerful enough. The US currently has a more developed infrustructure for both satellite and ground-based systems, so the connection you can get flying over the States is stronger and cheaper than in Europe, for example.

It sounds pretty awesome to stay connected and get some work done while flying, yet some people don’t find this idea all that brilliant. They would argue that planes have basically become the last tech-free space where you can just unplug and free your mind from the ever-present beeping and avalanche of content coming your way.

It’s a chance to watch one of the movies you never had time for, or read a book you’ve been putting off for years, or just chat with your neighbors; real communication is becoming more and more rare these days. Finally, there are also safety concerns. Like when using any other shared network, your private or financial data could be compromised by cyber criminals.

If you take your work on board and send business e-mails, then you’re risking losing your company’s data, as well. And if you’re not afraid of losing data, there’s also always a chance of getting a virus or malware on you gadget. By the way – do you use public Wi-Fi often, or do you think it’s not that safe? Let me know in the comment section below!

While more and more airlines are offering inflight Wi-Fi, a lot of people complain it’s too slow. This is because the tech that’s necessary for the inflight Wi-Fi systems is super expensive, and airlines don’t replace it as often as you replace your gadgets. So while you get an upgraded phone every couple of years, the planes’ systems are in use for five to ten years, and simply can’t catch up with the ever-growing number of users and their gadgets’ capabilities.

And as for grumbling about the high price for the service, consider this: the equipment itself is expensive; the antenna catching the signal increases drag, causing the plane to need more fuel; and there are also engineering and maintenance costs to keep it all working. Inflight Wi-Fi providers claim it’s going to get better and better.

Related :  Why Airplane Lights at Wing Ends Are Different

But meanwhile, in case you’re annoyed with the low speed, refuse to use Wi-Fi on board out of principle, or simply fly the no Wi-Fi airlines, here’s a list of ideas to keep yourself busy during your flight. Play a game And I don’t mean an app on your phone, but an actual game that involves reaching out to other people; they could be your travel companions, or just the guy in the seat next to you.

Most popular board games, from Backgammon to Taboo, have a pocket or travel version you can bring along. You could also buy a book of crosswords, word searches, or other puzzles. If you don’t like carrying any extra stuff, good old “charades” or “guess who” are still just as fun. You could also try out some plane-related games.

For example, you can look for different shapes in the clouds and make up a story connecting them all. Another idea is trying to guess what city or country you’re flying over, then open the map that’s available on many flights and see who was right. And, if you’re crossing countries, you can start a «who can do the best accent of this country» competition.

It gets pretty hilarious. Edit content for your social media If you’re going home from vacation, you probably have tons of pictures you’re planning to share with your friends online. You can use your off-the-grid time to edit them or create a posting plan using off line apps that let you see what the pictures will look like on your Instagram grid.

You can also create good long captions in your notes; no one has time for that on vacation, right? Or, you can make room for new pictures on your phone by going through and deleting any unwanted ones. Organize your laptop If you’re traveling with your laptop, don’t miss an opportunity to clean it and organize the files you have on it.

Does your desktop have over a hundred folders on it, 50 of them named «New Folder» or «Sort later»? You’re not alone. Why not take care of this chaos while you don’t have anything else to do? Listen to a podcast There are all kinds of podcasts in this world– from how to motivate yourself to be more productive, to what a journey inside a black hole would look like.

One thing they have in common is that you most likely never have the time to listen to them while on the ground. So download them before getting on the plane, and enjoy learning something new while looking at the clouds. Write a journal Two things that prevent a lot of people from writing a journal are lack of time, and distractions.

So, when you have time, but no distractions around you, you can put the details of your latest trip on paper before you forget them; or write down your expectations for the trip that’s just starting and later compare them to reality. You can also try setting some goals, creating a mind map of the person you want to become, or make a pros-and-cons list if you have some dilemma that’s bugging you.

Do some last-minute organization In case you packed in a rush, go through your carry-on and rearrange it in a more organized way. If you didn’t have the time to plan your trip day by day, use a paper guide or an offline app to read about the place you’re going to and make plans. You can also think over a budget for the trip, or learn a few useful phrases in the local language.

Hallo, where is bathroom please? Treat yourself to some skincare You’re not allowed to bring liquids or large bottles on board, but you can take a fiber face mask, spa gloves or a de-puffing eye mask with you. They’ll make the air travel experience a little less dramatic for your skin. There’s also facial massage, and even some stretching exercises and yoga poses you can try right in your airplane seat.

Finally, there are always the good old read a book, listen to some music, watch a movie,or chat to your neighbor options. Myself? I think that learning how to juggle three balls, right there, might be a good conversation starter, especially when you need their help to get them back after you drop one or two balls under your seat. But that’s just me.