Why School Buses Are Yellow – Consider the school bus. It could be painted literally any color: pink, bright green, orange, or even zebra-print. I like zebra print! So, why pick yellow? Is it because it’s a cheerful hue that makes kids happy to go to school? See the kid’s faces? I don’t think so. The main reason for picking yellow paint for school buses is. . .  safety!

But first, let’s figure out whether yellow school buses in the US are indeed that – yellow. If you look at the color closely, you’ll notice that instead of being pure yellow, it’s a totally different shade! I would say that it’s a curious mixture of lemon-yellow and orange, which reminds me of. . . a very ripe mango? In any case, if you want to be extra precise, you should politely refer to the color of American and Canadian school buses as “National School Bus Glossy Yellow”.

But wait! What about the scientifically proved fact that red is the one with the maximum wavelength? Um, what I mean is that it doesn’t get scattered easily, and that’s why you can clearly see it from afar! On top of that, most people associate this color with caution. So, why not paint school buses red? well, despite all the scientific stuff, it’s not red, but yellow, which is the color that instantly grabs your attention in daily life. 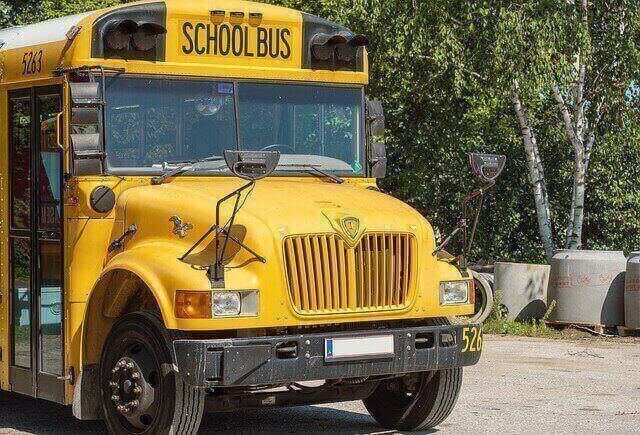 In other words, for some inexplicable reasons, yellow is the most visible color. On top of that, it has a kind of “illuminating” nature, which makes it stand out in the darkness, fog, or dim light. Now, lots of school buses must transport children to school early in the morning. Depending on the season, it’s often still dark outside at this time.

That’s why it makes sense to use yellow paint, which will make buses more noticeable on the road. What’s more, the black lettering on the yellow background is a perfect color combination. It immediately alerts drivers that they’re approaching a school bus during twilight hours. And finally, there’s one more crucial reason for this specific school bus color choice.

You’ve probably heard of peripheral vision? That’s when you see something out of the corner of your eye, without looking directly at it. So, scientists state that you’re 1.24 times more likely to spot a yellow object with your peripheral vision than the same object painted red! These are the reasons why you can’t legally have a non-yellow school bus in the US these days.

But it wasn’t always like this!The “National School Bus Glossy Yellow” color didn’t appear until 1939; before that, school buses were painted all kinds of colors. And before there were buses, kids were taken to school in special wagons drawn by horses. That sounds like fun – let’s bring that back! Curiously, the very first so-called “school bus” appeared in London in 1827, and it could carry 25 children.

Anyway, returning to 1939 and the newly accepted bus shade, it was called “National School Bus Chrome. “But there was something seriously wrong with this “chrome” color scheme: school bus chrome contained lead in its pigment. And this element was (and still is, for that matter) extremely dangerous for people, especially young children.

That’s why it was soon replaced with the paint manufacturers still use today. But let’s be honest here, if it wasn’t for safety reasons, what color would you paint school buses? Write about your choice in the comment section below and tell me why! But here’s another thing about school buses that might seem confusing.

Look, in all American states, as well as in most countries around the word, you must wear a seat belt when you’re in the car. And it doesn’t matter whether you’re a driver or a passenger. Plus, babies, toddlers, and young children have to stay in special car seats, fastened with seat belts. This way, if you get in a car accident while wearing a seat belt, it could save your life, or keep injuries to a minimum! Then why on Earth aren’t school buses equipped with seat belts?

However paradoxical it may sound, seatbelts simply won’t make school buses safer! The thing is that traveling on a school bus is a 40 times safer than going somewhere bycar. Some experts even go as far as to say that school buses are the safest type of transport ever! How come? It’s all thanks to compartmentalization! Yeah that’s a big word.

What I mean is that the seats on a school bus are situated close to each other, and they have high padded backs. As a result, if an accident does happen, and a student gets propelled forward, they’ll only move a short distance. And the seat back in front of them will also kinda play the role of an airbag.

Plus, on school buses, people sit high over the ground, which only adds to the overall safety. If another vehicle collides with a school bus, all the impact will occur under the seats. But I would be lying if I didn’t mention another, more practical reason for the lack of seatbelts on school buses. Money. M-O-N-E-Y. Moolah.

And here’s where it would start to get out of control: the changes would mean more gas, more drivers, and more CO2 emissions! Anyway, these days, the scheme is the following. If a school bus weighs more than 10,000 pounds, it’s up to the states to decide whether the vehicles need to be equipped with seat belts or not.

Today, only six states make schools equip their buses with seat belts, and they are Florida, California, New Jersey, Texas, New York, and Louisiana. But if a school bus is lighter than 10,000 pounds, it has to be equipped with seat belts in any state. By the way, the other day, I was driving behind a school bus and noticed something I’d never seen before.

Related :  9 Secrets of the Statue of Liberty Most Americans Don't Know

Under the belly of the bus, there were some chains hanging, and even slightly dragging, over the ground. Of course, as soon as I returned home, I started a full-on google search. And I’ve found out that not all school buses have these chains, because, honestly, you won’t need them in, let’s say, California.

The thing is that the chains help school buses get traction on icy roads. The chains are linked to the suspension system of the bus. If the driver realizes that they can’t cope without some additional help, they can just press a button on the dashboard. It releases tiny rubber chain wheels which are located next to the bus’s back tires.

Then, when the bus accelerates, these chain wheels spin and throw the chain links under the tires. Voila! Slowly but surely, the bus is going forward again! At the same time, when the bus isn’t moving or is slowing down, the driver can retract the chains. Also, have you ever seen a school bus with a black hood and wondered why it wasn’t the same yellow as the body?

The thing is that when the sun is too bright, the glossy, bright yellow paint covering the hood of the bus starts to give off too much glare. As a result, it makes it hard for the driver to see their surroundings, and distracts them from the situation on the road. That’s when the flat black painted hood comes into play. It significantly cuts down on the glare and allows the driver to see clearly.

And while some states make school bus manufacturers equip vehicles with black hoods, others forbid it. In this case, they get covered with an anti-glare substance. After that, the hood remains yellow, but the shade gets called “lusterless yellow”. And finally, to quote the rock band the Who: “every day I get in the queue, to get on the bus that takes me to you…too much, Magic Bus”. Well I like it…