Why Snakes Have Forked Tongues – Snakes! They look like an alien species, and some of the things they’re capable of will convince you they’re not from this planet! They see in Predator-like infrared, they shed their skin, and have you seen that weird-looking tongue? Yeah, let’s start with that one!

1. Why do snakes have forked tongues?
Because spoon-shaped tongues were already taken. No. It’s because they don’t use their tongue like we do. Think about it: you really don’t have time to taste something if you can only swallow food whole without chewing it. Instead of using it to taste, snakes smell with their tongues.

That’s why they always flicker it in and out – they want to catch nano-particles in the air that will tell them if their prey or some kind of danger is nearby. That’s also why their tongue is split in two near the end. (This introduces one of my favorite all-time words: bifurcated, meaning divided into two branches. Try that one out in a conversation sometime today).

The fork allows snakes to sense a larger radius and know the direction the scent comes from. For example, if the smell is stronger for one part of the tongue and weaker for the other, then this smelly thing is closer to that first part. It’s easy to imagine because your hearing works the same way.

No, your ear isn’t bifurcated (if it is, you might wanna get that checked out), but you have one on each side of your head. This allows us to hear “in stereo” – we have all the information about how close and in which direction the source of the sound is. So, yeah, you kinda have that in common with snakes! 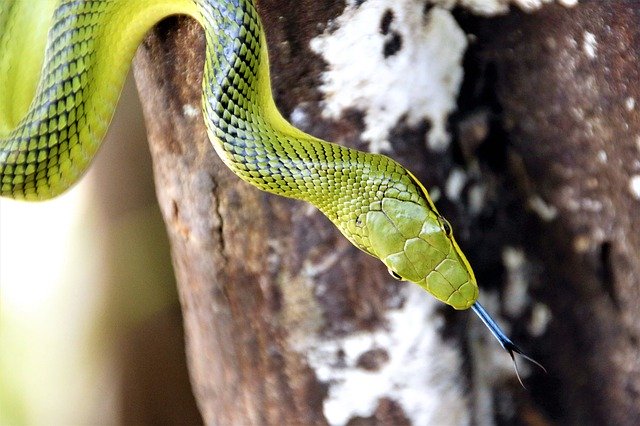 2. Why don’t snakes have legs?
It may seem like these reptiles never needed to evolve a pair of legs or arms, but it all happened the other way around. Snakes one day decided that legs are highly overrated and slithering is way too cool to miss out on, so they got rid of any limbs entirely! Ok, it didn’t exactly go down like that – it happened over several million years of evolution, but you get it. How do biologists know this? Many snake species still have rudimentary bones that leave no doubts – some time ago,they were legs!

Related :  All the Best Ways to Get Rid of Ants in Your House

3. There are flying snakes!
Well that’s nightmarish…Somewhere in that same evolutionary process, some species  aimed to become even more terrifying – they learned how to fly! This isn’t the same flight birds are capable of, and it doesn’t give snakes an ability to catch themselves one for dinner.

But it’s an effective way to go over great distances and avoid some predator that caught a snake off-guard while it was chilling in a tree. In basic terms, it’s more like gliding than flying.  The snake throws itself off a tree branch, flattens its body, and moves in an S-shape to change direction in the air.

4. Snakes don’t have eyelids
So don’t ever expect one to wink at ya!Just like legs, snakes have decided they don’t need eyelids either. Why? Because their lookers are covered in scales too! Well, it’s one big transparent scale, and that has its downside – snakes go almost completely blind when they shed their skin since these scales aren’t transparent anymore during this time. These eye scales are called brille, and like any other scale on the snake’s body, it’s made of keratin. The same material our nails and hair are made of! On that note…

5. Why do they shed their skin?
A counter-question would be: why do you? Every animal in the world sheds its skin, including people. The only difference is that snakes do it all at once and in one big piece. We do it constantly but in tiny flakes you can’t even see or notice. As for why snakes shed it like a glove, it’s because their scale-covered skin doesn’t grow with their bodies. And snakes grow all their life non-stop, so they simply change outfits that don’t fit them anymore!

6. Their vision is horrible
Snake eyes aren’t the sharpest out there, nevermind when that eyeball scale is all blurry and due for a shedding! Snakes can’t see colors at all. Most of them only see shapes, and the clearest shape for them is the one that’s moving. This poor eyesight isn’t a problem for them since they only hunt every once in a while.

Related :  What If You Swallowed the Most Venomous Spider

Their digestive cycle is quite long, so after a good meal, all they need to do is hide somewhere safe for a week or even longer. Maybe watch some football on the couch. To sense the world around them, they have much better tools…

7. Infrared-sensing!
They don’t smell with their nose, and they don’t see with their eyes. Yeah, snakes seem to have the 5 senses all jumbled. To make up for their horrible eyesight, snakes have a special “pit organ” near their nostrils that can sense heat radiation. This way, they can feel their prey going by. When this image is combined with a sense of smell coming from the tongue  and the ability to track any movement, the snake has no problems getting itself some dinner and evading predators!

8. Why do cobras have hoods?
Cobras are known for their unique hoods and their unsettling ability to spit venom. It turns out, these two features are closely connected. First, about that hood. You might know that it serves as a warning sign for predators to back off. It also makes the snake look bigger and more intimidating.

But did you know that the iconic cobra hood is made of ribs that extend out and sort of umbrella the loose skin on the sides of the snake’s neck? The warning worked for a while, but then the cobra’s predators called the snakes’ bluff and continued to prey upon them. So, many of them, like the king cobra, started spitting their venom right into the of fender’s eyes! How rude!

9. How do rattlesnakes make that noise with their tail?
Like the cobra’s hood, this snake’s rattle is a warning. But here’s how it works – each time a rattlesnake sheds its skin, it gains an elongated scale on its tail. So, the older the snake, the more of these rings  it has. When shaken, these rings knock against each other and produce a sound. Since this part of the tail is hollow, it makes the sound more audible. And that rattle means it’s time to skedaddle!

10. Why do they hiss?
Because they’re leaking air. Again, snakes give you plenty of warning that they’d like you to please go away because you’re giving them anxiety. If you don’t take the hint, they’ll be happy to sink some fangs into ya! Anyway, the real reason for the hiss – snakes don’t have vocal cords. They only have a glottis, which is a flap that closes and opens the windpipe so that ood doesn’t go down the wrong tube when it’s swallowed.

But without a voice box, snakes can only push a bunch of air through the glottis to make it vibrate and produce that hissing sound. So when you mimic a snake’s hiss by making an “S” sound with your tongue, you’re not quite getting the accent right! It needs a little SSS! – or something.

11. They move faster than the blink of an eye. It takes you 200 milliseconds to blink. Sounds like a lot for such a simple movement, but you know how quick that is! But get this: a snake springs from a folded position, launches itself up to 2 feet forward,opens its jaws, and bites – in just 50 to 90 milliseconds! The average reaction time for a startled animal is almost the same, but it’s often not enough to avoid the strike!

12. Their jaws are like a trap. A snake’s lower jaw isn’t attached to the upper part of the skull, which makes them highly flexible. They can open their mouth up to 150° and swallow prey that’s 5 times wider than their own body.

Man I had a roommate like that once. Cleaned out my frig. The prey won’t escape those jaws even if it isn’t poisoned or constricted because the snake’s mouth is filled with up to 200 teeth. All of them are not suited for chewing, clearly, but they make for an ideal trap with little chance for escape!