Why Two Oceans Don’t Mix – When you look at the seas and oceans on the map you might think that they just flow into each other. It seems like there’s only one big ocean, and people just gave different names to its parts. Well, you’ll be amazed at how vivid the borders between them are! The border between the Pacific and Atlantic oceans is like a line between 2 worlds. It looks as if the two oceans meet at an invisible wall which does not let them flow into each other and mix their waters.

Why on Earth does it happen? We know for sure there is no invisible wall inside, and water is water. What could interfere with its mixing? The thing is that water can be different too. The Atlantic and the Pacific oceans have different density and chemical make-up, the level of salinity and other qualities. One can see by their color that they are far from being the same.

The borders between two bodies of water with different physical and biological characteristics are known as ocean clines. Haloclines – borders between waters with different salinity – are the most spectacular,and this is what we see when the Atlantic and the Pacific oceans meet. The famous explorer Jacques Cousteau found this when he was deep diving in the Strait of Gibraltar.

The layers of water with different salinity looked like they were divided with a transparent film, and each layer had its own flora and fauna. Haloclines appear when water in one ocean or sea is at least 5 times saltier than in the other. You can create a halocline at home if you pour some seawater or colored salty water in a glass and then add some fresh water on top of it. 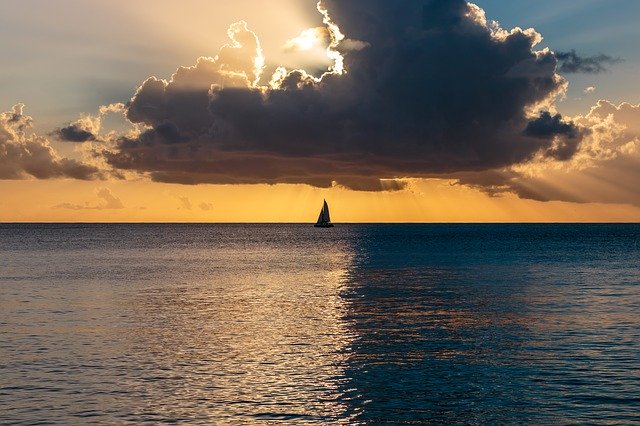 The only difference is that your halocline will be horizontal, and ocean haloclines are vertical. If you remember a couple of basic things from physics you might argue that a denser liquids hould finally end up lower and less dense higher. If that were true the border between the two oceans would look not like a vertical line but as a horizontal one, and the difference between their salinity would become less obvious the closer they got to each other.

So why doesn’t it happen here? Well, first, the difference in density of water of the two oceans is not that great for one of them to get down and the other to rise up. And yet it’s enough not to let them mix. Still, another reason is inertia. One of the inertial forces known as Coriolis force influences objects when they are moving in the system of axes which, in its turn, is moving too.

In simpler words, the Earth is moving, and all the moving objects on it will be acted upon by Coriolis force, deviating from their course. As a result, the objects on the Earth surface don’t move straight on but deviate in clock wise order in the Northern hemisphere and counterclockwise in the Southern. But the Earth is moving slowly, it takes the planet a whole day to make a full circle around its axis.

That’s why the Coriolis effect gets obvious only in long time intervals: with cyclones or ocean flows. And this is why the direction of flows in the Atlantic and Pacific oceans is different. It also doesn’t let them mix. Another important difference between the two oceans’ water is the strength of molecules’connection, or surface tensile strength. Thanks to this strength, molecules of a matter hold to each other.

The two oceans have a totally different surface tensile strength, and it also doesn’t let them mix. Maybe they could gradually start mixing with time, but as the flows in them have opposite directions, they just don’t have time to do this. We think that it’s just water in both oceans, but its separate molecules meet for just a short moment and then get carried away with the ocean flow.

Don’t you think, though, that only the Atlantic and Pacific oceans don’t get on well with each other!There are a lot of places on the planet where water in the two seas or rivers does not mix. There are also thermoclines – borders between water of different temperatures, like the warm water of Gulf Stream and much colder North Atlantic Ocean.

Related :  7 simple etiquette rules you don't know you are breaking

Chemoclines are the most amazing ones. These are borders between waters having different micro climate and chemical make-up. The Sargasso Sea is the biggest and most widely known chemocline. It is a sea within the Atlantic Ocean which has no shores but you’ve got no chance not to notice it. Let’s have a look at other most spectacular clines on the planet.

1. The North and Baltic Seas These two seas meet near the Danish city of Skagen. The water in them does not mix because of different density. Sometimes you can see the waves of the 2 seas clash into each other, making foam. And yet their water mixes gradually, that’s why the Baltic Sea is slightly saline. If there had been no water coming to it from the North Sea it would’ve been a huge fresh water lake.

2. The Mediterranean Sea and the Atlantic Ocean. They meet at the Strait of Gibraltar and have a different density and salinity, so their water does not mix too.

4. The Surinam River and the Atlantic Ocean meet near Paramaribo in South America.

5. The Uruguay River and its afflux These two meet in Misiones province in Argentina. One of them is cleaned to be used in agriculture, and the other gets almost red because of loam during rainy seasons.

7. Mosel and Rhein They meet in Koblenz, Germany. Rheine has lighter water and Mosel – darker.

8. Ilz, Danube, and Inn The junction of these 3 rivers is in Passau, Germany. Ilz is a small mountain river to the left, the Danube is in the middle, and Inn is the light river to the right. Inn is wider than the Danube here but still is its afflux.

10. Irtysh and Ulba flow into each other in Kazakhstan near the city whose name you’ll never beable to pronounce, nor will I. You give it a shot.  The Irtysh has clean water and Ulba – cloudy.

12. Irtysh and Om These two rivers flow into each other in Omsk, Russia. The Irtysh is cloudy and the Om – pure and transparent.

13. Chuya and Katun rivers meet in the Altai Republic, Russia. The water of the Chuya has an unusual cloudy white color here and looks dense and thick. Katun is clean and turquoise. Flowing into each other they form a single two-colored flow that does not mix for sometime.

14. The Green and Colorado rivers The place of their junction is Canyonlands. National Park in Utah, USA. Colorado is brown and Green is – yep, green. The corridors of these rivers go through rocks with different chemical make-up, that’s why they have such a big contrast of colors.

15. The Rhone and Arve rivers They flow into each other in Geneva, Switzerland. The Rhone is a pure river that flows out of the lake of Geneva, the Arve is cloudy as it gets its water from glaciers of the Chamonix valley. So, water you think about all this water? Of course it’s a bad joke, like a lot of my bad pronunciations of those river names.