Worst Stereotypes About Americans When They Travel – American tourists are rude! German tourists like to hog seats. Chinese tourists only travel in packs. Visiting a foreign country or even a different region within your own country can be fraught with cringe worthy moments. Tourists and locals often hold stereotypical beliefs about each other, which while not the full truth, often hold an element of truth.

While we can generalize about the behaviors of tourists from any country, today we’re discussing some vagaries other countries and even other US regions perceive in American tourists. Before you Americans watching get upset and bombard us with ‘not ALL Americans do x,y and z’ in the comments, please relax! This is not all official science, we’re merely discussing some topics which have been frequently mentioned by locals of different nationalities when discussing American tourists.

For you smug and smirking citizens from other countries, you also better chill; we might do a video on tourists from your country next. Sometimes before a tourist even opens their mouth and lets an American accent fly, locals have already pegged them as a visitor from the US. Why do you ask? Because of how they are dressed.

Americans are known for dressing down. They tend to focus on comfort and wear ill fitting or baggy clothing. They love sweat pants, shorts and have even been known to wear pajamas in public. Sometimes American tourists will dress inappropriately for visiting certain places of interest such as wearing shorts to a religious site, thereby disrespecting locals. 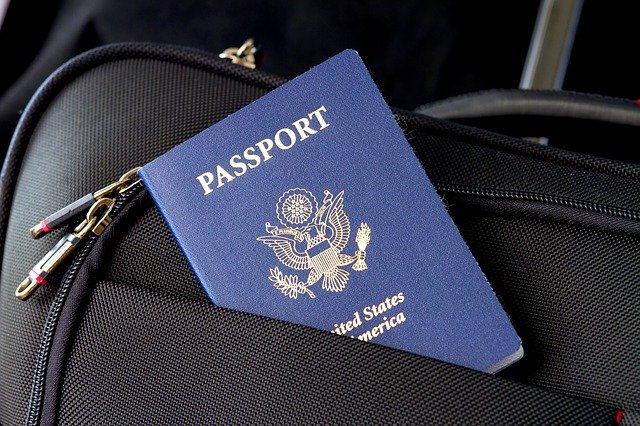 When not wearing sweatpants, Americans like to wear jeans. They also like Hawaiian shirts, clothing with the US flag or patriotic imagery and shapeless-shirts with logos or slogans that mention sports teams or places local to their home state. Americans enjoy accessorizing their comfortable clothing choices with fanny packs and ugly or garish footwear such as flashy sneakers, plastic clogs and the ever popular socks with sandals.

The finishing touch is often a baseball cap or sun visor which is frequently worn inside unless an establishment specifically forbids it. Even when Americans are nicely dressed, sometimes they can even be picked out as being from the US because they still wear sneakers or flip flops. Has America’s propensity for under dressing been been scientifically proven? No, but online polls for worst dressed countries and worst dressed tourists frequently have the US ranked near the top of the list.

With anecdotal evidence from internet forums such as Reddit, it’s fair to say that most American tourists could step up their fashion sense. American tourists often give a big clue as to what country they come from by smiling. That’s right. The rest of the world thinks that Americans smile too much.

Long articles on various websites and even an op-ed in the New York Times have discussed this issue. American tourists smile frequently, brightly and often have an overly friendly demeanor. Other countries tend to be more conservative with their smiles. Locals can find such behavior creepy or off putting. Americans’ blinding smiles are a part of their cultural landscape.

In 2015, a team of international researchers found that countries with a large presence of immigrants tend to rely on body language to communicate friendliness, build trust and cooperation. With a long history of immigration and 83 source countries represented by its citizenry,the US has a larger immigrant population than any other country in the world.

Smiling is a quick way to try to connect with others or be pleasant when you don’t know what to say. Add to that American dentistry and beauty standards which emphasize straight, white teeth and the smiling can perceived as being fake or passive aggressive. Some would accuse US tourists of being superficial or hiding their true feelings behind a toothygrin.

Some Americans take the overtly friendly demeanor even further. They smile and try to connect with locals by adopting certain local mannerisms or slang to try to fit in. Locals also find this type of behavior odd and accuse Americans of trying too hard or even cultural appropriation depending on the American’s action.

The difference may lie in the culture of American friendships versus the friendship culture of the country they are visiting. Americans tend to be outgoing and easy to generally get to know. They love knowing lots of people and have casual relationships with many friends. When meeting someone new, Americans make small talk by asking about a person’s career as an easy way of gaining some insight into who that person in.

While on the other hand, locals in many other countries consider a person’s career less vital to their identity and view questions about what they do for a living as boring,rude, trying to categorize them or put them into a box. In many countries people are initially hard to get to know, but have longer term deep,intimate relationships with a few friends as opposed to quickly built superficial relationships with a large number of people.

Americans impatient to force a rapport or bonds by appropriating local culture can be seen as insulting or embarrassing. Of course when Americans open their mouths, the American accent comes out. If it’s a specifically recognizable accent such as a southern drawl, New Jersey spiel or laid back west coast accent, locals may recognize it and have certain expectations or feelings about certain American tourists simply because of the accent.

This even frequently happens in America! Southerns are dumb hicks, New Yorkers are impatient and on and on. US citizens have American entertainment being broadcast around the world to thank for that. Americans tourists are often seen as culturally ignorant, brash and wanting to be catered to. These traits display themselves in many ways.

Americans seem to prefer to stick to fast food such as McDonald’s when they travel instead of trying out local cuisine. They get confused or angry when they can’t use American money in other countries. They seem to have the attitude that throwing their money around will get them want they want. Also, Americans rarely take the time to learn anything beyond the surface of local culture.

They are ignorant regarding geography and global affairs. Many surveys have confirmed that Americans tend to know less about the world than people of other countries. Most recently a 2016 National Geographic survey quizzed over a 1,000 US college students about geography, current events, and economics and world trade.

Most respondents were only able to get half the questions right, they scored around 55%. On the flip side, locals report Americans as being offended when they are only familiar with large cities in the US and don’t know the small town in the Midwest the tourist is from! Along with the cultural ignorance is the attitude that Americans are somehow better and other countries and people exist solely for the entertainment of Americans on vacation.

US tourists forget that they are guests in another country and should respect the customs and traditions of their host nation. Sometimes American tourists feel no compunction in taking a picture of people belonging to certain religions or cultures as some sort of vacation memento, often without asking said person first.

American tourists are notorious for being monolingual. Along with their pushy, needing to be catered to attitude, vacationing Americans often assume that people automatically speak English. They are surprised, frustrated and can even be offended when locals don’t speak English. Puzzlingly, they’ve even been known to speak English louder and more slowly to try to get people to understand.

Related :  20 Different Hospital Food from Around the World

Of the bilingual Americans, many are immigrants or first generation Americans. Professionals in the restaurant sector in other countries are often not impressed by the American tourists that patronize their establishments. When Americans do forego the fast food and try local dishes, they tend to be complainers.

Not only do dining American tourists have ‘the customer is always right attitude’,they want their food to be served quickly and gallop through their meal. This behavior is odd to cultures where dining is important; lingering over your food and enjoying the settling and conversation is a huge part of the meal. Also local servers find that American’s have child like palates.

They will ask for condiments such as ketchup so they can douse their food before eating it. American tourists are highly critical of food portion size in other countries, calling them tiny. It’s true, serving sizes in typical American restaurants tend to be around 20% larger than the average entree served in Europe. This feeds into stereotypes of American tourists being fat and greedy.

The fat part is true, some two thirds of Americans are overweight. People in other countries assume that Americans tourists are wealthy. The US has a powerful global economic standing in regards to other countries. Many American TV shows feature stories about upper class Americans. Americans have big houses and multiple cars.

Furthermore, they are on vacation in another country. The US has a tipping culture and so, Americans expect to tip when they go overseas. Also Americans sometimes get large sums of cash from foreign atms. To locals this reinforces the idea that Americans tourists are rolling in the dough. In addition to being depicted as wealth in the entertainment media, young Americans are also displayed as carefree party animals.

When young Americans go overseas to countries with lower drinking ages, they frequently go overboard on enjoying the liquor, living up to the image depicted on TV. Of course not all American tourists ares slobbly, fat, shallow, English speaking only, culturally ignorant, drunken party animals who toss money around. However, we can’t ignore the grains of truth in these stereotypes.

Thankfully, many people meeting American tourists visiting their countries, realize that people are individuals rather than just a stereotype and treat them as such. What’s an awkward experience you’ve had as a tourist or with a tourist? Let us know in the comments.